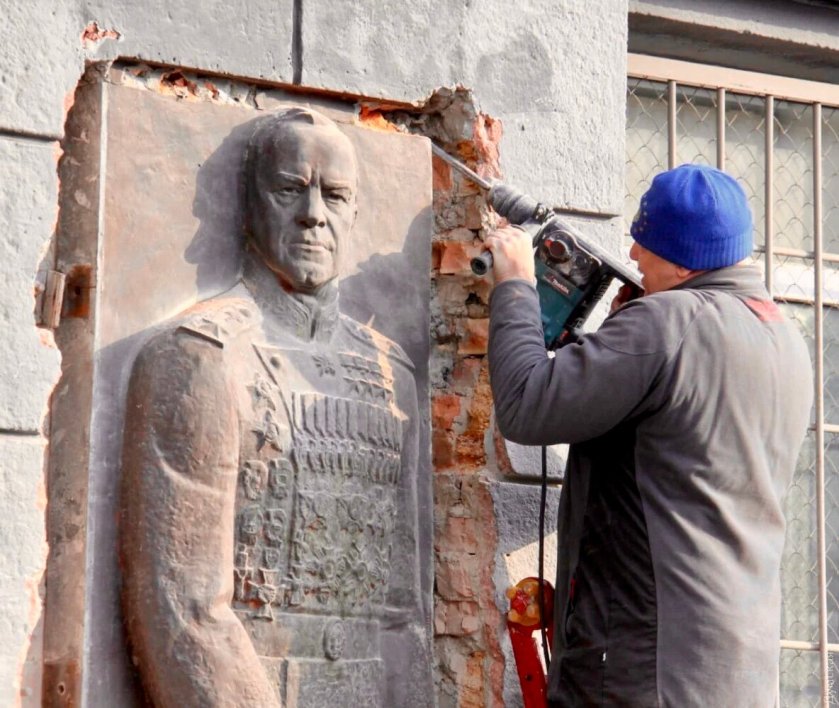 Author’s Note: In 2020, President Putin signed into law the ‘Offence’ of destroying Soviet War Memorials with a punishment of up to 5-years in prison. Just why he bothered to do this is a mystery when confronted with the article featured in TASS (on the 21.2.2022! After-all, the Russian Army has been instructed to ‘remove’ all Soviet War Memorials it encounters in ‘liberated’ territory – obstentively for ‘safety’! It seems that Putin is of the opinion that the Soviet symbolism (which represents working-class ‘internationalism’) is attracting the counter-balance of ‘Neo-Nazism’ (and its ‘nationalism’) in the area! Remove the ‘stimulus’ (Soviet symbolism) Putin believes – and there will be no basis for the ‘response’ (Neo-Nazism) to manifest! Clear the Ukrainian territory of both and the bourgeois ideology of predatory capitalism can flow through the place – unhindered by what capitalist-supporters interpret to be extremist ideological battles! The problem with this approach is that it legitimises what the US has been doing in the region, justifies the Nazification of those countries surrounding Russia. Predatory capitalism flows unhindered in Neo-Nazi Poland, Estonia, Latvia and Lithuania (simply because fascism is a friend of capitalism)! All that has been required for the US to assist these countries has been the one-sided ‘De-Communization’ process! A process which has increased in pace in opposition to Russia’s unilateral action in the Ukraine! I suspect that all Putin had to do was come to an agreement behind the scenes with Biden and capitalism could have been enhanced in Ukraine with no death or destruction at all! ACW (27.3.2022)

None of it makes any sense as surely the longterm economic and material damage far outweigh any short-term gains. The Russian Army is not the Red Army and Putin’s grasp of Soviet history is simplistic deficient to say the least (and he lived through much of it). It is a ‘learned’ (foreign) paradigm that seems not to have been explained to him very well (as there is much confusion between the concepts of the bourgeois ‘individual’ and ‘collective’ working-class identity – he misses the point entirely that no one asked the working-class whether or not they wanted to be exploited). The clue, I think, lies in an obscure TASS article (dated three days before the invasion) within which Putin regales us with his take on Soviet history (he would have us believe that a disembodied Lenin was sat in the sky – like a Greek god – simply moving pieces into places on a giant chessboard), and using this strange analogy, he threatens the Ukraine not with the ‘De-Nazification’ that has been so widely reported, but rather with the far more sinister ‘De-Communization’ hardly reported in the media at all! Interestingly, the Russian Army has been dismantling Soviet Monuments since day one of the Special Operation (even in entirely peaceful areas) stating that they are being removed for safety and protection (from Ukrainian attack). When the conflict is over, then a discussion will be had as to whether they will be replaced or permanently removed! Lots of penny’s have had to drop into lots of places! Yes – de-Nazification may well be the objective (as this will take away America’s direct power in the region), but not in the service of Socialism (as de-Cimmunization clearly demonstrates that) but rather in the name of predatory capitalism and bourgeois self-determination – the very same ideology that Putin shares with Biden! In the meantime, there’s something for everyone as Communists, Socialists, the working-class and ‘Non-Whites’ can align themselves with de-Nazification, Trotskyites, capitalists and far-right supporters with De-Communization and supporters of extending NATO and the EU with the eventual stabilisation and rebuilding of the area into a well-stocked existential Slavic theme park entirely free of any associations with 20th century history and no discernible scares from the war in 2021!

“Now grateful descendants have demolished monuments to Lenin in Ukraine. This is what they call de-communization. Do you want de-communization? Well, this quite suits us. But you must not stop halfway. We are ready to show you what genuine de-communization means for Ukraine,” Putin said in his address to the nation over the situation in Ukraine’s southeast.

“This process started almost immediately after the 1917 Revolution; Lenin and his associates did it in a way, very brutal towards Russia itself – by separating, alienating parts of Russia’s own historic territories,” Putin added.

According to Putin, “nobody asked millions of people about anything.”.

“Then, before and after the Great Patriotic War, Stalin acquired some territory that previously belonged to Poland, Romania and Hungary, and handed them over to Ukraine. […] In 1945, [Nikita] Khruschev took Crimea away from Russia for some reason and also granted it to Ukraine,” Putin noted. “This was how the territory of the modern Ukraine was created.”.

Vladimir Lenin is the author and the architect of Ukraine, it can be called after him, Putin said. “The Soviet Ukraine emerged as a result of the Bolshevik policy, and even nowadays it can with good reason be called Vladimir Ilyich Lenin Ukraine. He is its author and architect. This is fully confirmed by the archive documents, including Lenin’s directives regarding Donbass which was literally squeezed into Ukraine,” Putin said.