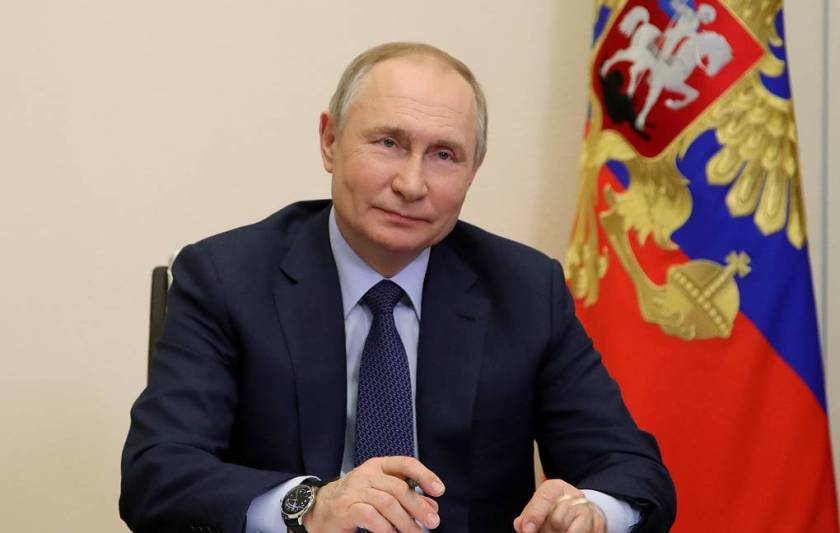 Putin is a bundle of contradictions. He was brought up in the USSR and received a sound proletariat education, although today, the ideology of the class he beat expresses is that of the bourgeoisie. Where did he learn this? Probably from watching US movies and realising that predatory capitalism can enrich certain individuals providing working-class hegemony is compromised. Certainly, his critique of the USSR, if he means it, reads like the ramblings of a petulant 12-year-old American child just learning to get to grips with anti-intellectualism!  Of course, part of the problem is that the US pseudo-history of the USSR that used to be ‘outside’ of Russia is now firmly ensconced ‘inside’ of Russia and is taught to Russian school children in the Russian language! The fact that the ‘living’ and ‘recorded’ history contradicts this brainwashing seems not to concern anyone. The more bizarre the lie about the USSR more likely it is considered to be true! Putin was already a mature adult when this process began so we cannot say that he was effected by it to any great extend. By 2000 he was already holding high politic office which he would not have done in the USSR as there is some doubt about the loyalty of his family to the USSR!

In other words, Putin excelled in the bourgeois system and not the Socialist system. He appears to respect the military and reintroduced economic aid to Cuba. He also reintroduced welfare and medical help for the population. As he certainly is not a Communist, these policies must be a matter of pure political pragmaticism. Now, having said all this, why would he risk destroying the longterm stability of the Russian economy and war with the West over a political point (i.e. the spread and consolidation of Neo-Nazism), when this has only ever made any sense from a Marxist-Leninist perspective? What is the point? Putin is certainly not freeing the Ukrainian people from capitalism even if he is freeing them from Hitlerism!

Putin is attracting Communist support from around the world for his apparent defiance of the United States (and its predatory, capitalist system) – but from what Putin states in his TASS article ‘Russia ready to show what true de-communization means for Ukraine – Putin’ (21.2.2022) – Putin’s take on Russia and Soviet history sounds like it has been compiled by a quick sketching of notes from an ‘A, B, C Anti-Communist Handbook’ – the kind given-out to ALL US children at nursery. Putin’s comments are breathtakingly bourgeois and obviously non-Soviet – despite ‘non-Soviet’ also equating here with ‘non-Russian’! Assuming Putin has not had some kind of psychological incident and that he is still playing with a full bag of marbles – the assessment can begin!

First things first. Genuine ‘National Socialism’ was described by Adolf Hitler (in many interviews) as being a benevolent ‘Tauonic Tribal Dominance, Hierarchy and Totalitarianism’! A single man (like the Catholic Church Hitler favours and privileges the ‘male’ gender) figuratively ‘stood atop’ the totem pole (there is much phallic symbolism in it all – the closer we are assumed to get nearer to nature. This is important as German women need to ‘breed’ to populate the planet with functioning warriors and hone-makers). The ‘totem’ here also represents the system of governance under ‘National Socialism’, an ever steeper and inaccessible climb awaits any individual who tries to ascend out of place or without permission. As Hitler seemed fixated on Karl Marx (his fellow German), he smarted at the popularity that Marx had gained from his intellectual output – even gaining admiration from those who profoundly disagreed with his conclusions!

Hitler once spent an entire interview with an American newspaper (as during the 1930s – Hitler and his ‘Nazism’ – was incredibly well received in the West) within which he stated that Karl Marx had ‘stolen’ the term ‘Socialism’ from the German people and perverted and polluted it with all kinds of ‘Jewish’ propaganda concerning the unnatural concepts of ‘equality’, ‘sharing’, ‘internationalism’ and ‘democracy’ and the like! Hitler explained that genuine ‘Socialism’ meant one-thing and that was Aryan racial dominance! A great man would direct any and all needed resources to wherever they were needed in a society – but only to those who were racially worthy of such ‘redistribution’! Everyone else would be ‘eradicated’ from existence as surplus to requirement! There was a polite titter amongst the gathered US journalists – but nothing more – certainly no protests!

The US has been agitating throughout Eastern Europe since 1991, and have moved to limits of NATO toward Russia on five different occasions despite assurances to Gorbachev that this type of American imperialism was a thing of the past. The US took-over the economic and military administration post-1945, and consolidated this grasp of sovereignty through NATO and the European Union (EU) – both symbols of US militarism, anti-intellectualism and neo-imperialism. As the US intends not only to physically wipe-out the USSR – but also to wipe-out its history and all its achievements – It is important that the events of WWII are destroyed and the sacrifice of the Soviet people removed from the history books! This is exactly where US anti-intellectualism does its best work. It is here, at this very point of where ‘sacredness’ and ‘transcendence’ overlap in the Russian psyche that US ignorance goes to work!

In typical (and ‘inverted’) bourgeois fashion, the US (and its allies) attempt to re-write history by now stating that the Soviet Red Army was a vehicle for oppression, tyranny and oppression, an that the Soviet Socialist System was no different to the German National Socialist System it fought to defeat! Furthermore, as there was ‘no difference’ between these two monoliths – when the Germans dominated entire regions and carried-out the mass killings, murders, rapes and maiming, this was preferable to the USSR being in control of the same areas despite the USSR never having carried-out genocidal mass killings (indeed, the ‘mass killings’ were carried-out by the Nazi Germans against the Soviets who lost around 41 million between 1941-1945). The US (and her modern allies) – all far-right political fringes inhabiting countries surrounding Russia – had to fabricate and invent non-existing supposed ‘Soviet’ atrocities which are then trumpeted around the US-controlled internet (with the anti-intellectual ‘Wikipedia’ leading the way)! These are atrocities that exist only in the imagination but never in material reality. The US anti-intellectuals simply pursued the path of comparing any Socialist Leader to ‘Adolf Hitler’ followed by the inevitable (and often ludicrous) invented back-story! (Mao supposedly ‘killed millions’ and yet no one in China knows anything about this! No one lived through such a time, no one lost a relative and there are no mass graves!)

What is Putin doing in the Ukraine? The Russian Army is slowly but surely ‘purging’ Eastern Ukraine of any control by the Neo-Nazi and US controlled ‘Maidan’ regime. This seems to be an attempt at securing all the territory claimed by the People’s Republic of Lugansk and Donetsk (which might eventually include Odessa), and ensuring these ‘new’ Republics have complete control of the area marked-out in their assumed sovereignty claims. The Red Flag is flying but of course, the modern Russian Military flies this routinely as a ‘battle honour’ and it does not necessarily equate to any political ideology. Eastern Ukraine is not being ‘freed’ in the name of ‘Socialism’ but rather in the name of bland liberal democracy and consumer-led capitalism! In the end, although US-backed Neo-Nazism might be defeated – US-controlled capitalism will still continue in its place – which was, after-all, the intention of the Americans all along! What is interesting is that Russian Forces have been ‘removing’ Monuments dedicated to the Soviet Red Army during WWII under the guise of ‘protecting’ these structures! The thinking being that following ‘discussions’ after the war – a decision will be made as to what will happen to these once sacred objects! It seems to me that there is just as much of a ‘Communication’ going on as a ‘De-Nazification’ – and I am beginning to wonder whether Putin is applying the dictate of US anti-intellectualism that there is no difference between ‘Marxist-Leninism’ and ‘Hitlerism’! Of course, although Hitler inflicted around 41 million casualties upon the Soviets between 1941-1945 – the US Military (according to a recent report) – since 1945-present has inflicted between 20-30 million casualties upon the peoples of the world in pursuit of its socio-economic and military values!  It all seems to be a numbers game! Whatever he case, Putin’s interpretation of Soviet history is entirely bourgeois in nature, misleading and slightly disconcerting! It is an expression of breath-taking simplicity, stupidity and ulterior motive! Of course, none of this is a problem for the continued functioning of predatory capitalism – but why would Putin risk all this death and destruction to achieve an objective that could have been settle through negotiate? Why didn’t Putin simply state that Russia would assist in the destruction of its own ‘Socialist’ past if the Ukraine would cooperate by playing down its associations with Adolf Hitler? Joe Biden could mediate with President Xi playing Wicket-Keeper!

“Now grateful descendants have demolished monuments to Lenin in Ukraine. This is what they call de-communization. Do you want de-communization? Well, this quite suits us. But you must not stop halfway. We are ready to show you what genuine de-communization means for Ukraine,” Putin said in his address to the nation over the situation in Ukraine’s southeast.

“This process started almost immediately after the 1917 Revolution; Lenin and his associates did it in a way, very brutal towards Russia itself – by separating, alienating parts of Russia’s own historic territories,” Putin added.

According to Putin, “nobody asked millions of people about anything.”.

“Then, before and after the Great Patriotic War, Stalin acquired some territory that previously belonged to Poland, Romania and Hungary, and handed them over to Ukraine. […] In 1945, [Nikita] Khruschev took Crimea away from Russia for some reason and also granted it to Ukraine,” Putin noted. “This was how the territory of the modern Ukraine was created.”.

Vladimir Lenin is the author and the architect of Ukraine, it can be called after him, Putin said. “The Soviet Ukraine emerged as a result of the Bolshevik policy, and even nowadays it can with good reason be called Vladimir Ilyich Lenin Ukraine. He is its author and architect. This is fully confirmed by the archive documents, including Lenin’s directives regarding Donbass which was literally squeezed into Ukraine,” Putin said.