Thirty-five years on, and the British born Chinese lead actor in ‘The Blind Baker’ – Gemma Chan – is asked by modern white British producers at the BBC to ‘put on’ a terrible Chinese accent that is supposed to represent how white British ‘hear’ Chinese people when they talk in England. In fact Gemma Chan speaks with a refined English accent which is easily discernible in her lead-role for the Channel 4 2015 Sci-fi series ‘Humans’. Although the word ‘ch*nk’ is omitted, Thompson provides all the stupid Eurocentric and racist stereotypes that have been evident for hundreds of years in the UK, and which form the bedrock of anti-Chinese racism. What is even more worrying about this blatant racist misrepresentation of Chinese people in the UK is that other British ‘white’ executives at the BBC vetted Thompson’s script and then ‘okayed’ it for production!

END_OF_DOCUMENT_TOKEN_TO_BE_REPLACED

All these monks pursue the Dao of the Divine-sky (hence the ability to walk through the sky) whilst devoutly upholding the Vinaya Discipline.

END_OF_DOCUMENT_TOKEN_TO_BE_REPLACED

Zionism as pursued by the modern State of Israel is a fascist ideology that is in many ways identical to its Nazi German equivalent. Zionism is not so much a self-defensive response to anti-Semitism (as its ideologues would have you believe) but is in fact the embracing of fascist ideology by predominantly ‘white’ Jews of European descent. From the late 1800’s and into the 1900’s, European Jews living in ‘Palestine’ propagated a ‘racial’ superiority between themselves – the chosen children of god – the gentile British colonial authorities, and the racially and religiously inferior Palestinian people. The Jews of Palestine, whilst ruthlessly pursuing the racist ideology of Zionism, never suffered any ‘holocaust’ in the Middle East at the time when millions of their fellow Jews were being hunted down and exterminated by the Nazi German regime.

END_OF_DOCUMENT_TOKEN_TO_BE_REPLACED 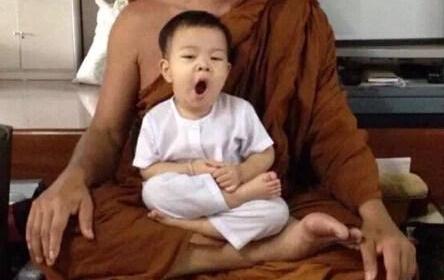 He was apparently only three months old when he started meditating with the adult monks and accompanying them on alms-rounds.

END_OF_DOCUMENT_TOKEN_TO_BE_REPLACED

In one half an old monk – the other half a cloud.