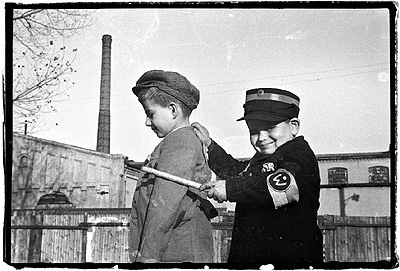 Adolf Hitler was a very popular leader throughout Western Europe and the US. One reason for this was the firm-hand he used in controlling the German working-class. The British aristocracy loved him for it (see the antics of King Edward VIII – and the Swastika Funeral on the streets of London in 1936) – as did the British bourgeoisie (Churchill wrote about Hitler in glowing terms)! Hitler ‘solved’ unemployment in one fell swoop by rounding up all the unemployed men (women were not permitted to work in Nazi Germany), and placing them in enforced ‘Labour Camps’! In these camps men lived imprisoned and were made to do hard labour for which they received their food and board, etc. The only way out was to ‘volunteer’ for the German military – so Hitler got rid of unemployment AND massively enlarged the armed forces available to him! Once the problem of unemployment was dealt with, these ‘Labour Camps’ were then transitioned into ‘Concentration Camps’ whereby populations of ‘undesirable’ people (such as Jews, Gypsies, Gays, Communists and the Disabled, etc) were ‘concentrated’ in one place and ‘quarantined’ from the general population. They were poorly fed, badly treated and would die from over-work, illness and exhaustion. This was the unofficial way of getting rid of these unwanted people. As Hitler had declared them racially ‘inferior’ their presence was considered a polluting hindrance to the ‘pure’ Germanic (Aryan) race! Their removal from society and physical exploitation was one answer – followed by their physical destruction – which began as an official policy around 1941 (coinciding with the Nazi German invasion of the USSR). Working to death was augmented with shooting, beating, gassing and lethal injection, etc.

Of course, women and children also faced the constant danger of being ‘raped’ by the Camp Guards (usually ethnic Germans, but sometimes also other Axis Personnel) – a common occurrence by all accounts. There was also many cases of men being raped and sexually abused. This is how Labour Camps became Extermination Camps. Dachau, however, appears to be unique in that it was founded as a camp for political prisoners – or those ethnic Germans who opposed Hitler – but evolved into a Concentration and Extermination Camp in its own right. In 1933, the conditions in Dachau, although not perfect, were far better than they would be in similar camps as time progressed and Nazi dogma became State Creed. When faced with the horror of such a regime, those scheduled for extermination will do anything to survive and live just a few minutes longer. I understand fully this requirement and mind-set. Many people are caught by fascist systems in positions of vulnerability very different from those of us who read their stories today. After-all, are we not the recipients of the freedom won by the brave Armies of the Western Allies and the Soviet Red Army? Many different types of people were made to assist the Nazi Germans – but I am sure that if they had the chance they would have plunged a knife into the nearest goose-stepping bastard who came near them! I begrudge no one who ‘survived’ whilst faced with the Holocaust. As a Communist I vow to protect all people from fascism! This was the thinking behind the soldiers of Soviet Red Army when they Liberated the Death Camps (often at a terrible price in blood)!

Jews were forced to assist with their own extermination by the Nazi Germans. Many formed auxiliary police units armed with a short baton, a hat and an arm-band. They were temporarily empowered to keep ‘Nazi German’ order in the ghetto, and to beat any Jew who stepped out of line or refused to toe the line. These Jewish units often assisted in the round-up, execution and ‘processing’ of the bodies of dead Jews after the Nazi Germans had carried-out the murders. Quite often, these men had to assist in the killing of their own family members. When working in the clearing of dead bodies from the floors of gas chambers – many Jewish workers would encounter the corpses of dead relatives. This physical and psychological abuse would go on for a few months before the Jewish volunteers would have themselves to submit to the very same process of extermination. Assisting the Nazi Germans often bought around three extra months of life for the individuals concerned. Describing this process is vital for understanding why the ideology of Nazism cannot be allowed to flourish once again in the world! Anyone of us could be a victim of this process!