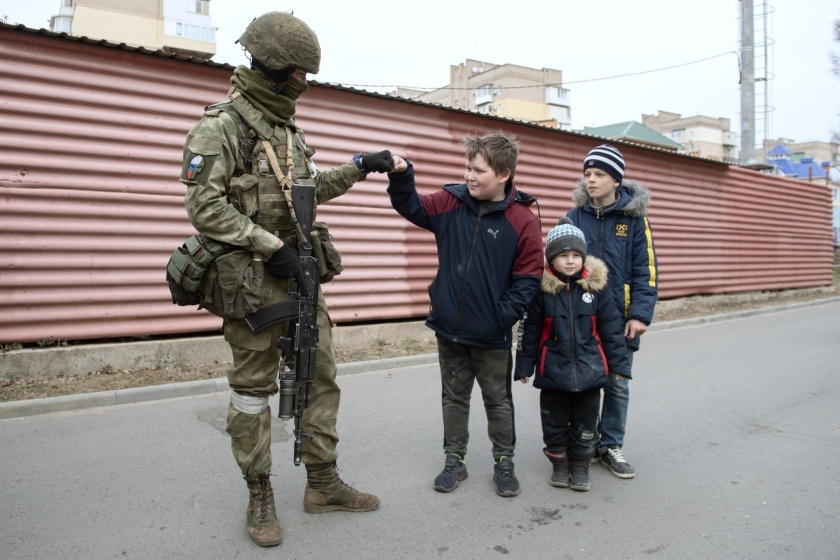 The problem is one of (Western) governmental manipulation of mass communication. Another issue stems from Russia’s naivety when dealing with the West. A hard lesson to swallow is that it turns-out that by overthrowing your own Socialist System – and the voluntary whole-sale importing of the capitalist vision of the West does not guarantee that the racist and culturally negative stereotypes that the West has historically perpetuated against your country – suddenly comes to an end! The lesson ‘modern’ Russia (as if ‘Soviet’ Russia was somehow ‘pre-modern’) has to learn is that by selling-out your own unique historical path (a question of ‘class’ overthrow), does not (and will not) in any way prevent the US, UK and EU from continuously agitating at your borders – and within your borders – to take away your hegemonic control of society and replace with their own. Of course, this is the nature of the beast. Predatory capitalism never loses its predatory nature and will continue to hunt-down the weak, the crippled and the ill! The only defence against it is a robust cultural and military defence!

The mighty Soviet Union possessed both (but hamstrung itself through Khrushchev’s 1956 betrayal of Joseph Stalin – the strongest working-class leader the world has ever known). This is where the ‘internal’ collapse of the USSR started and the roots of the American victory began – as the US could never have defeated the USSR on the battlefield. We know this because in the brutal logic of predatory capitalism, if America could have achieved this – it would have achieved it – and of course, it did not. Indeed, if the USSR and China had remained united, I doubt very much that a ‘modern’ (capitalist) Russia would even exist. Instead, since 1991, we have had to endure the Russian re-appropriation of the Romanov flag and double-headed eagle – two symbols of feudal oppression reviled during the times of the USSR! Part of the current problem for the US is that Russia refused to allow a Rothschild-controlled central bank to operate within their country. This means that unlike all capitalist countries in the modern world, the US did not have direct financial control of the Russian economy. This means that Russia cannot be directly controlled by Washington through threats of slowing down or turning-off the money-tap!

Russia has not invaded Ukraine – that storyline is a fabrication of the US government which continuously ‘directs’ the so-called free press on what lines to take and opinions to print. Like the British rebels in the American Colonies who refused to ‘bend the knee’ to the British Authorities in London before and during 1776 – the ethnic Russian and Ukrainian people of ‘Donbass’ (the former ‘East’ part of old Ukraine), decided that they did not want to be a part of the US, UK and EU-backed Neo-Nazi ‘Maidan’ regime that illegally took power from the democratically elected centre-left and pro-Russian government in 2014! Three ‘People’s Republics’ were immediately declared, that of ‘Odessa’, ‘Lugansk’ and ‘Donetsk’! As America in the 21st century funded, armed and trained the ‘Maidan’ Neo-Nazi militants, it would not accept the calls of the Donbass people for their own independence to be respected and acknowledged. The Crimea, seeing that the US was implementing a far-right ‘coup’ immediately withdrew from membership of the Ukraine and voted to re-join Russia. This left the West of the Ukraine firmly under Neo-Nazi control – with the East of Ukraine under control of the ‘People’s Republics’!

During WWII, the West of Ukraine (as part of the Soviet Union), possessed a large Roman Catholic population which openly collaborated with the Nazi German invaders – following the Vatican’s official policy held before, during and after WWII of collaborating with the fascist governments of the world. The Vatican has never been held accountable for this Crime Against Humanity and has never altered its policy. Indeed, much of the anti-Russian and anti-Donbass rhetoric today is emanating from the Vatican. Indeed, Catholic Priests and Monks have been reported blessing ‘Neo-Nazi’ volunteers as they head over the Poland border into Donbass to ‘kill’ the local population – with the Catholic Church continuing its policy of offering safe travel and safe haven to those Neo-Nazi War Criminals seeking escape and concealment from justice. The Catholic Church is a main-player in the violence in Donbass and has been supporting the ‘Maidan’ attack on the ‘People’s Republics’ since the problem began in 2014! Alongside the United States, the Vatican lurks in the background manipulating events from the shadows!

In early 2021, Russia formally ‘recognised’ the diplomatic existence of Donetsk and Lugansk (with ‘Odessa’ having been brutally invaded and destroyed in 2016 by the Western-backed Neo-Nazi ‘Maidan’ regime). The governments of Donetsk and Lugansk then immediately requested military assistance from Russia to help push-out the military presence of the ‘Maidan’ all along the Western edge of Donbass. This ‘Maidan’ military presence was comprised of ‘volunteer’ Neo-Nazi Battalions that recruited ‘far-right ‘criminals’ from all over the world. This collection of the scum of the earth was eulogised in the US media as consisting of ‘young heroes’ whilst being fully funded, armed and trained by the West! Their Nazi German past were celebrated with such notorious names as ‘Azov’, ‘Aidar’, ‘Lugansk-1’ and ‘Dneipr-1’, etc, all full of cut-throats, rapist and paedophiles! These units were sent forward by the West, the Catholic Church and the ‘Maidan’ Neo-Nazi government to ‘terrorise’ the ‘Russian-friendly’ population of Donbass – as if taunting them with the terrors of WWII!

Donbass is the collective name for the region that Lugansk and Donetsk currently geographically occupy. As Russia has already recognised the two entities of Lugansk and Donetsk as comprising ‘sovereign’ and ‘independent’ States, when the Russian Army entered this geographical space – it was not ‘invading’ Ukraine, as the US lawyers already fully understand – but this legal reality has been kept from the minds of Western readers to blind them to the truth of the matter. Instead, the language used is a legal fiction. East Ukraine no longer ‘legally’ exists as a part of what used to be considered ‘Ukraine’ and Russia has not ‘invaded’ it! Furthermore, for eight-years, the People’s Militias of Lugansk and Donetsk have been bravely fighting the continuous aggression of the Neo-Nazi Battalions. The Russian Army, at the request of the democratically elected governments of Donetsk and Lugansk, entered the region these two militias were defending and added their substantive weight to the fight. In effect, the Russians are clearing the Neo-Nazi Battalions out of Donbass (formerly East Ukraine) and is taking further action to ensure that the Western-backed Ukrainian Army cannot launch a counter-offensive. Russian Forces are not, as yet, entering West Ukraine the population of which is completely untouched by war and sat at home watching events unfold on TV!  As far as I can tell, Russia has no intention of entering West Ukraine which will remain under Neo-Nazi, Catholic and US control, but Russia will probably advanve into central Ukraine as part of destroying the Ukrainian Army.

A contributing factor to this situation lies in the fact that the US, UK and EU were funding, arming and training the Army Forces of Ukraine, together with the Neo-Nazi Battalions, to fully ‘invade’ Donbass and clear-out ALL support for Russia! This would have meant the utter destruction of Lugansk and Donetsk and would then have allowed a unified Ukraine to join the EU – and inevitably to have joined NATO – both organisations ultimately controlled by the US. NATO Forces, under the pretext of ‘holding back’ an aggressive Russia would have been moved up to the Russian border – and this would have led to a direct confrontation between Russia and the US! Having gained intelligence about this US-backed plan, Russia has decided that the best action was to pre-empt this US attempt of moving NATO up to its borders and go on the attack in Donbass – clearing-out all the forward positions the West had been constructing along the Ukraine-Donbass border! Yes – Russia will face ‘sanctions and economic damage – but this is considered a price worth paying as Russia will keep its independence, will keep NATO away from its borders and will prevent a direct confrontation with the West! Regardless of the outcome, of course, the Catholic Church will continue its evil machinations deep from within the shadows of the world!