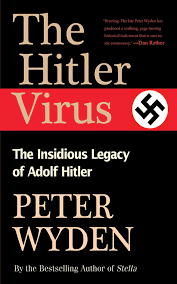 There is something very ‘wrong’ with this book and it is not just the nature of the very real and active threat of neo-Nazism throughout Germany since 1945 and into the present. The author – Peter Wynden – died in the late 1990s, but his editors finished his book for him – retaining the methodological error that runs through its core. Peter Wyden must be an ardent supporter of US neo-imperialism and the predatory capitalist system it has inflicted on Western Europe from 1945 to present – and upon Eastern Europe from 1991 to present. I say this because whilst assessing the presence of Neo-Nazism throughout Germany – Peter Wynden omits entirely the reality of the conquering US Forces simply re-arming and re-designating Nazi German military formations throughout West Germany and in so doing, allowing certain ‘anti-Communist’ elements of Nazi German ideology to remain in the general rhetoric and mind-set of West Germans – so that neo-Nazi movements could spring from this fertile ground (happening as the trap-doors ‘sprang’ and many – but not all – Nazi War Criminals fell to their deaths on the specially constructed gallows)! Indeed, throughout a shattered Western Europe, the US demanded that in return for paying for reconstruction – the governments of Western Europe had to crush their homegrown Communist Movements and following the various trials and execution of a few Nazis – rehabilitate as many ex-Nazis as possible to lead the resistance against what the Americans ‘imagined’ was an imminent threat from the Soviet Red Army and its Warsaw Pact allies. France was an important bulwark in this American plan (the process of which is expertly described in Alexander Werth’s 1955 book on the subject). In the meantime, Peter Wynden completely ignores the fact that the US employed key ex-Nazis to lead NATO and NASA! If he had lived long enough, Peter Wynden would have witnessed the US propagating a massive neo-Nazi resurgence throughout Eastern Europe propagated on the simple grounds that a good neo-Nazi automatically holds the correct ‘anti-Russian’ sentiment that current US foreign policy demands! Indeed, America’s first ‘Black’ President – Barack Obama – oversaw the neo-Nazi take-over of West Ukraine in 2014! The Americans have always used fascism to attack Socialism and to isolate Russia. Peter Wynden, however, whilst focusing upon the minutiae of neo-Nazi crimes, perpetuates the myth that somehow the reason that neo-Nazism ‘did not exist’ within the (Socialist) East German was because the East German State ‘suppressed’ it and therefore ‘radicalised’ it – making it even stronger! This is utter nonsense and bordering upon the insane! The ‘Stasi’ or ‘Revolutionary Police’ in East German robustly defended the Workers’ Revolution by enforcing the law – which banned any form of fascism. Whilst this was happening, the US perpetuated the lie that these neo-Nazi thugs were the ‘victims’ of a ‘brutal’ Communist State! As can be seen, the East German State did not ‘drive neo-Nazism’ underground’ as Peter Wynden wrongly asserts, but robustly and effectively confronted and uprooted it from East German society. It was only in the early 1990s, as US predatory capitalism began to spread into East Germany (as its Socialist institutions were destroyed) that the safeguards against neo-Nazism were ‘removed’ and neo-Nazism spread into East Germany from West Germany. To aid this process of anti-Russian hate, the US government sponsored two bourgeois ‘feminist’ German women to concoct the myth of Soviet Red Army soldiers committing acts of mass rape during the ‘liberation’ of East Germany. (a scenario not supported by UN data). The US perpetuated the myth that whilst the Red Army was losing between one-hundred to two-hundred thousand Red Army soldiers (men and women) per week – as it combatted the fanatical Nazi German SS resistance (mostly Scandinavian ‘volunteers’) in and around East Berlin – it possessed the leisure time and inclination to ‘rape’ German women and girls! The British ‘historian’ Antony Beevor played along with this myth (including it in his 1992 tome on the liberation of Berlin – which is ‘banned’ in Russia for spreading pro-fascist lies and racist misinformation). In the meantime, Professor Elena Senyavskaya (Еленой Сенявской) – full member of the Academy of Military Sciences, Specialist in the Military History of Russia in the 20th century, Expert in Military Psychology and author of more than 250 scientific papers – published a paper in 2016 investigating, exposing and dismissing this US lie. It is a shame that Peter Wynden did not follow a similar trajectory and reveal the two real cause of neo-Nazism in Germany. The first is the German people and their obsession with various forms of totalitarian dominance, and the second is US post-1945 policy which confronted the Communist challenge by utilising various forms of fascism for their inherent anti-Socialist and anti-Russian ideology! He could have also had the good grace of recognising the Socialist effort throughout East Germany to rid the German people of the ‘Hitler Virus’ as he refers to this proclivity.