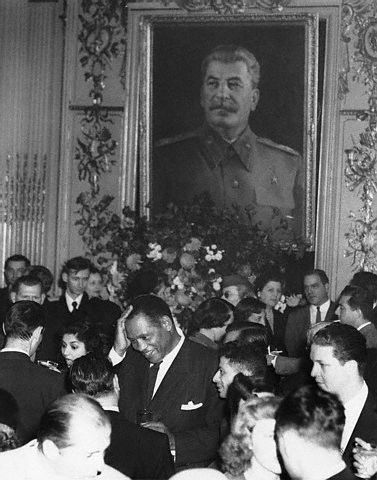 Having read a number of books on the subject of Paul Robeson’s life it is self-evident that the price paid by a number of African-Americans who regained entry back into the United States – after experiencing a very good life of freedom and progression in the USSR – is the complete denial and demonisation of the Soviet Union and everything it stood for. Of course, this deception plays into the hands of the ‘White’ (racist) Authorities in the US, and for African-Americans marks a turning away from Socialism (and Revolution) and an embracing of Christian religion (the belief system of the slave-masters) and a compromise with predatory capitalism. Today, the Trotskyite attitude of the ‘reform’ of capitalism is prominent, with the US being as racist as ever (which although protested on the periphery is tolerated just as long as a certain proportion of African-Americans are permitted to make money). Paul Robeson Jr is no exception to this rule. Whilst establishing himself as the only legitimate spokesperson for his father – after returning to the US his biographical work has conformed to the history of the Cold War as fabricated by the US (replete with its anti-intellectualism). Whilst perpetuating the ‘myth’ of African-Americans being held ‘captive’ in the USSR – Paul Robeson Jr becomes unstuck when one of the alleged victims disagrees with this assessment. Writing in his 2001 book entitled ‘The Undiscovered Paul Robeson – An Artist’s Journey. 1898-1939, (Page 281) he states:

‘When Paul and Essie headed back to London four days later, I thought nothing of it when Uncle John accompanied them, carrying just one suitcase, ostensibly for a short vacation before returning to his job. In fact, Uncle John had no intention of coming back. He had sensed the coming of Stalin’s Great Terror of 1937, and had convinced Paul and Essie to get him out of the Soviet Union before it was too late. As a Western foreigner in Moscow, he felt he would be a prime target during a spy scare, so he deliberately left most of his belongings behind so as not to raise suspicion.

Uncle Frank, who lived in the nearby city of Gorky, which was closed to foreigners, decided to stay and take his chances as a Soviet citizen. Fortunately, he survived the successive waves of Soviet internal repression unscathed.

Uncle John’s situation was not Paul’s only security concern. Earlier, he had met with Eugene Dennis, a top leader of the US Communist Party, who had spent a good deal of time in the Soviet Union and was familiar with its top leadership. Dennis was worried, He urged Paul to publicize my school attendance in the Soviet Union vigorously, explaining that this would greatly reduce the possibility that I would be held hostage – a practice that was then fairly common where foreign communists were concerned. Paul took the warning seriously enough to begin talking constantly in public about my experiences in the United States.’ (4)

These paragraphs are ludicrous, stupid and fly in the face of the known facts. Paul Robeson Jr understands exactly what he is doing and uses the fiction of a privileged personal knowledge and experience to ‘educate’ the readership about a purely fabricated Paul Robeson. Like many authors – both Black and White – who strive to make money out of the life time of struggle of Paul Robeson, they know that if the book is to be viable in the US (and make money) Paul Robeson’s ‘true’ Revolutionary spirit must be played-down and/or eradicated through US Cold War hysteria. In these paragraphs (and at various other locations in the book) Paul Robeson Jr is deliberately ‘lying’ and making statements for which there is no supporting objective evidence. Indeed, the narrative being established here contradicts everything known about Paul Robeson from his own mouth and behaviour. Indeed, as if predicting problems of integrity at some later date, in footnote 4 Paul Robeson adds this admission (which contradicts the paradigm he is trying to establish):

In an ironic twistof fate, Eugene Dennis’s son, Tim, was held hostage in the Soviet Union when Dennis was sent on a Comintern mission to China in 1937. In 1959, Khrushchev included Tim in the delegation that accompanied him to the United States so that Tim could attend his father’s funeral. However, when Khrushchev personally offered Tim the opportunity to remain permanently in the United States with his family, Tim decided to return to the Soviet Union.’

These paragraphs and footnote appear in the Chapter entitled ‘Russia’s Son; Stalin’s Shadow (1936-1937)’ These chapter (like much of the book) try to include ‘facts’ about Paul Robeson whilst misrepresenting his life and world history. The point is paint Paul Robeson (and the Soviet Union) as ‘wrong’ and the United States as ‘right’. It is the use of US anti-intellectualism by an African-American broughtup in the Soviet Union – who betrays both his father and the USSR by siding with American capitalism. I think this Is the only ‘truth‘ Paul Robeson would be interested in, and that he would be ashamed of what his son had become. As the internet was in its infancy in 2001, many of us today are in a position to access the many different sources of genuine Paul Robeson material – including his interviews and statements he made. It would appear that the price of re-entry’ into the US by African-Americans was the betrayal of Soviet Socialism – a system which Paul Robeson stated was ‘free of racism’.