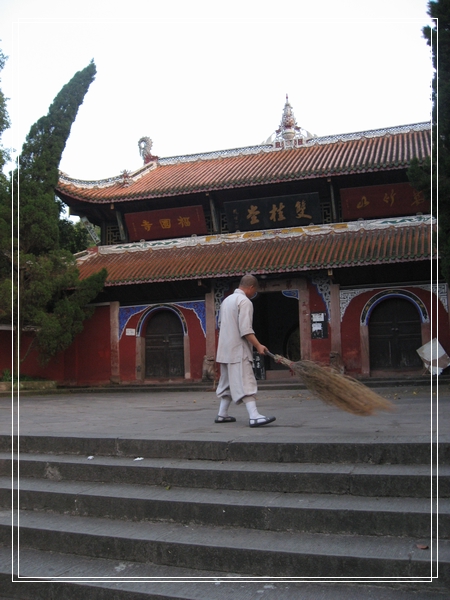 When a body of knowledge leaves its mother-culture and permeates into unfamiliar and very different cultures, errors of interpretation and understanding are bound to happen, and should be expected.  Of course, such errors do not exist only within Western discourse, which has tended to filter all new and incoming information not only through a Judeo-Christian rubric, (supplemented by a capitalist, political bias from around the middle of the 20th century onwards), but is also observable within various aspects of Japanese Buddhist discourse, particularly in relation to the ‘Japanese’ interpretation of ‘Chinese’ Buddhist history.  Whereas the erroneous Western discourse may be attributed in-part to cultural and historical differences, the Japanese erroneous discourse is primarily one of the deliberate ‘distortion’ of Chinese culture and identity, particularly since the Meiji Restoration of 1868, which saw a resurgent ‘nationalist’ Japan attempt to distance itself from its obvious Chinese cultural influences and origination.  This situation has been compounded by the fact that Western scholarship has chosen to follow the apparently ‘modern’ scholarship of Japan, with regard to interpreting and understanding Chinese history and culture, whilst refusing to ‘engage’ with Chinese scholarship, either ‘traditional’ (pre-1949), or ‘contemporary’ (post-1949).  This has created a situation whereby ‘Chinese’ history and culture has been inadequately interpreted by one culture (i.e. the ‘West’), through the erroneous scholarship of another (i.e. ‘Japan’), which is compounded by the fact that neither the West nor Japan are willing to admit the errors they have made (and continue to make) with regard to interpreting and understanding Chinese history and culture, and fully engage with Chinese academia to rectify these errors.

It goes without saying that every distinct cultural grouping possesses the right for self-determination, and, of course, self-interpretation, but with regard to China’s own distinct historical and cultural identity, the West and Japan appear unwilling to apply this most ‘liberal’ and common-sense attribute.  Prior to WWII, China appeared ‘distant’ even to those colonial Europeans who lived there.  The Confucian-based education system was designed to exclude most Chinese people, and it certainly was not open to those non-Chinese who did not understand its ethos and functionality. Although a small number of Western scholars did attempt to engage this old style Chinese academia, for the majority of Europeans It appeared opaque and impenetrable.  Japan, by way of contrast, whilst pursuing a racist nationalist policy throughout Asia, was willing to modernise its institutions along Western lines, and that included reforming its academia away from that of Chinese dominated Confucianism.  Part of this drive for cultural independence from China was the whole-sale rejection of Chinese history and culture.  Japan quite literally ‘invented’ a new identity for itself, whilst mimicking the West culturally and militarily (a policy that would ironically lead it into a direct and disastrous confrontation with the West).  After Japan’s defeat in 1945 (caused in part by the dropping of two atomic bombs by the US), and the success of Chinese Communism in 1949, the US quickly reactivated Japanese nationalism, albeit operating in a new framework of enforced liberal democracy and rampant, US-style capitalism.  The US pursued this policy to create a Japanese buffer-zone between Communist China and the rest of Asia.  From that ‘Cold War’ point onward, the US would not allow any correction of either its own, or Japanese scholarship relating to China, and actively encouraged further misrepresentation and distortion.  The idea of this policy was to ‘conflate’ everything ‘Chinese’ with everything ‘Japanese’, so that the ordinary Westerner could not tell them apart, and had no independent access to Chinese academia to check the claims.  Although the internet has allowed for theoretical access to Chinese history from China, the obvious language barrier prevents the average Westerner from being able to engage directly with authentic Chinese culture without the aid of reliable translation.  However, more and more good quality translation is slowly becoming available about China in the West, and this is breaking-up the US-Japan monopoly upon interpreting Chinese history and culture.