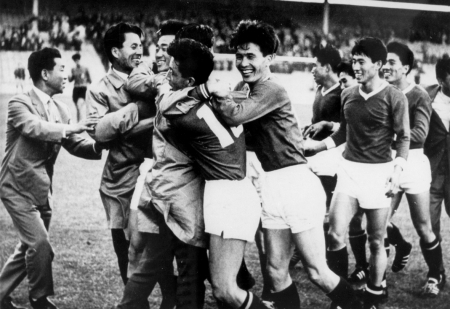 06/12/2022 Adrian (釋大道) Democratic People's Republic of Korea (DPRK), Human Interest, Leftwing Political Analysis Comments Off on US Fascism: Its Attack Upon FIFA and the Future of the Game! (6.12.2022)

Apparently, the US government believes FIFA is a ‘Communist’ entity that is influencing the world through football! The fact that no matter how much money (and privilege) the US government ‘throws’ at its selected ‘Soccer’ players – the US system of capitalist development and exploitation is simply not working! Physical fitness and will-power may well be how White Europeans stole the Americas from its original inhabitants – and subjugated those that survived the genocide – but a country with absolutely NO historical appreciation of football cannot ‘buy’ experience and expertise! I say ‘fitness’ – but of course – in the old days it was nothing but naked agression plus superior weaponry produced by the Industrial Revolution or improved production methods prior to 1750.

US Soccer players are fit, strong and committed to their cause – and they do not belong anywhere near the top twenty football teams in the world. They do not possess the pedigree or experience in depth and the US government cannot gain influence in FIFA by their national squad ‘winning’ the World Cup! The US piles millions of dollars into its colonies of South Korea and Japan – and in those cases the money does equal ‘success’ to a certain extent. Israel is a shit footballing nation but the Palestinians – who love football – are not allowed out the ‘Concentration Camp’ the Zionists have constructed for them! This is why FIFA has been forced by US pressure to a) allow the 2026 World Cup to be held in the US (as well as Canada and Mexico) – and b) increase the qualifying sides from 32 to 48! This is the US plan to get its ally – Israel – into the Finals!

This is why everywhere you look you will see US-sponsored anti-FIFA rhetoric all over the internet – untruths, non-truths and complete lies similar to how the US misrepresents China or North Korea! One classic CIA ‘fake’ story is that India qualified for the 1950 World Cup – but ‘racist’ FIFA banned them because they could not afford boots! When the Indian FA was asked about this, they stated that it was a ‘racist’ lie that is repeated continuously throughout the West! India only qualified in 1950 for the World Cup by default because all the other Asian sides (which finished above them) ‘withdrew’ for various reasons – but India did not care about the World Cup at that time and wanted to save their best players and resources for the Olympic Games football! This is why India did not attend the 1950 FIFA World Cup – and it had nothing to do with an overtly ‘racist’ explanation perpetuated by the CIA! Give racism the boot – indeed!

FIFA is essentially a bourgeois charity that makes billions – like any good capitalist charity – but the US cannot influence or penetrate its inner workings, and this is why it is attempting to ‘legally’ infiltrate and ‘colonise’ its left-leaning mechanisms – so that it can direct them toward the political right-wing! The US is stating that only countries it agrees with should host the World Cup – and this is the essence of US fascism which we must fight and defeat! Russia in 2018 (anti-Ukrainian Neo-Nazi) and Qatar in 2022 (anti-Israeli Zionism) is all part of a US-plot instigated by FIFA! If only it were! Prior to 1991, the CCCP, and other Communist countries such as East Germany, Poland, Romania, Czechoslovakia, Yugoslavia and Hungary used to routinely qualify for the World Cup Finals! In England the British working-class took to supporting North Korea during the 1966 (UK) World Cup Finals! They chanted:

Over Here, Over Here!

Sitting in the Sun!

Nobody knew exactly what ‘Juche’ and ‘Sorghum’ actually meant – but the general consensus was that it must be better than the misery of living within predatory capitalism!