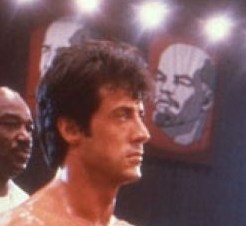 Sylvester Stallone is set to shock his Hollywood playmates with a totally unexpected re-editing of his now Cult-Classic (1985) sports film entitled ‘Rocky VI’! Gone is the weird ‘SICO’ robot and its disturbing undercurrent of sexual perversity – and in comes a much more ‘politically aware’ Ricky Balboa – who admits that the predatory capitalism of the United States is destroying the natural environment and making life a misery for the working-class! Rocky’s individualistic (bourgeois) ruggedness which saw him defeat the collective organisation of the Soviet fighter (Ivan Drago) turns a full 180 degrees and sees Rocky ‘defect’ to the USSR and start an amateur boxing gym in Stalingrad!

Furthermore, instead of Apollo Creed ‘dying’ – he is seen flying to Soviet Russia and assuming the role of Black Ambassador for the sport much like Muhammed Ali in 1978! Pauline is put in-charge of a construction firm in Leningrad and Adrienne agrees to campaign as a feminist to free all women in the world from the capitalist yoke of patriarchy! Rocky spars with Drago and despite the size differences – demonstrates the gulf between capitalist professional boxing and Soviet amateur boxing – with the former being highly exploitative of the fighters well-being and the latter existing to build the psychological and physical health of the participants! Stallone admits that the ‘USSR could never have produced a professional boxer purely on the grounds of the amateur system they employed!’

This revelation has been the impetus behind the Director’s Cut of Rocky VI which is set to turn a few heads in the movie business! To clarify, Stallone explains’ I really do not know why people think I am right-wing – I’m not! I never supported Trump or the March on Congress. It’s just that as I get older I am prepared to see the bigger picture. The USSR had a lot going for it! Even when I was making a derogatory film effectively insulting their entire social system – the Soviet people were still good and welcoming to me. I was even offered a free house in Moscow and free access to their education system.

Dolph Lundgren was even offered Soviet citizenship to assist in legitimising the film!’ When asked whether this new conciliatory approach might deflate the entire confrontational premise of the movie, Stallone commented ‘Well, there are many different levels of conflict. Two men – two social systems – this premise stays the same – but this time it is the capitalist who is converted to the point of view of the Socialist! Don’t forget that both versions of the film remain available for people to watch. People can make their own minds up about which side of the ideological coin they which to support!’ The Director’s Cut will be available to watch in 4K at Cinemas from November 11th, 2021!