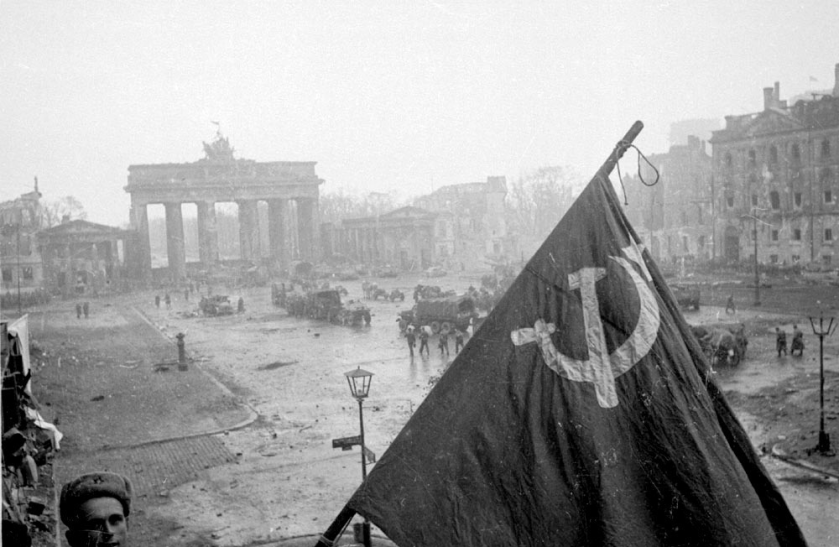 Author’s Note: Between September 1939 and June 1941 – the UK stood alone in Europe and North Africa against the Nazi Germans and Fascist Italy – as well as the Imperial Japanese in Asia. At this time, the debate within the US was between two schools of thought. One suggested aiding the Nazi Germans against the British – whilst the other advocated the US remaining ‘neutral’ until the Nazi Germans defeated Great Britain – and then getting involved supporting a ‘new’ Europe (which would include a defeated UK). At no time in these three years did the US government (or people) consider the ‘opposing’ of fascism. When the Hitlerite forces brutally invaded the USSR in 1941 – the Soviet Union immediately became an ‘ally’ of the United Kingdom – and its presence and support breed ‘new’ life in the besieged and demoralised British people! The British had suffered numerous military defeats at the hands of the Nazi Germans and Imperial Japanese – and yet its populace ‘refused’ to give-in or ‘surrender’ to this tyranny! Knowing that the Soviet Red Army was now on the side of the British war effort created a wave of euphoric resistance despite the nightly bombing of British cities and the deaths of thousands! The Americans only got involved in WWII because of the excellently planned (and carried-out) attack on Pearl Harbour – by the Imperial Japanese Airforce during early December, 1941! After this, the US joined the ‘allied’ cause more or less by default. Whilst pursuing a ‘race war’ against the Japanese – the Americans joined Winston Churchill ‘behind the scenes’ – scheming and planning to defeat the Nazi Germans whilst inflicting the most damage upon the military forces of the Soviet Union (and the infrastructure of the Soviet Socialist State). The plan was to encourage the Soviet Red Army to do most of the fighting and dying (whilst the Western forces were preserved and kept back from the worst of the heavy fighting) – whilst reducing and destroying the Nazi German Army and its ability to wage aggressive war! This idea seems to be premised upon Leon Trotsky’s (1938) call for his supporters to join forces with ‘international’ fascism and destroy the USSR! Whatever the case, this ‘plan’ was discovered by the Soviet Intelligence Service and resulted in the Communist Party (of the USSR) deciding to militarily ‘take’ Berlin when the objective of the USSR’s invasion of Nazi German was originally ’undecided’. In early 1945, the Americans and British ‘secretly ‘negotiated with the Nazi Germans for its forces to surrender in Italy – whilst the Nazi German forces simply gave-up (or harmlessly ‘stepped aside’) within west and central Europe – allowing the British and US forces to advance ‘unopposed’ into Berlin. This ‘agreement’ would allow considerable Nazi German military resources to be diverted from the West to the East, and strengthen the Hitlerite defences against Soviet Red Army attack. This Western duplicity would result in the deaths of hundreds of thousands of more Soviet Red Army casualties because of this ‘allied’ betrayal. Indeed, this incident may well be considered the beginning of the US Cold War perpetuated against the USSR – and it happened even before the end of WWII! ACW (25.12.2020)

‘While the Russians conducted their sideshows in Pomerania, West Prussia, and Silesia, the Allies took charge in the centre ring in a style that by the end of March had completely changed the strategic picture in Germany. They had closed to the Rhine along its whole length, had deep bridgeheads across the river, and were rapidly completing an encirclement of the Ruhr that would chop Army Group B out of the German front, opening for them a broad boulevard east to the Elbe. In Switzerland they had entered into secret negotiations looking toward the surrender of the German forces in Italy. From these the Russians, though informed, were excluded.

In Moscow on the night of 31 March the Allied representatives presented to Stalin a message from the General of the Army Dwight D Eisenhower outlining the Allied Supreme Commander’s plans for his operations in central Germany. Eisenhower stated that his next objective, after he had encircled and destroyed the Germans in the Ruhr, would be to split the enemy forces by making a junction with the Soviet armies. He believed that could best be accomplished by a thrust along the line Erfurt-Leipzig-Dresden. As soon as he could, he would make a secondary advance to meet the Russians in the Regensburg-Linz area and so prevent the Germans from establishing a redoubt in southern Germany.

Replying – with altogether unusual alacrity – the next day, Stalin agreed that the Allied and Soviet forces should meet as Eisenhower proposed in the Erfurt-Leipzig-Dresden and Regensburg-Linz areas. Berlin, he added, had lost its former strategic significance, and the Soviet Supreme Command planned only to allot secondary forces in that direction. The Soviet main offensive, he stated, would probably be resumed in the second half of May.

Even as Stalin wrote, the Soviet armies from north Opava to the mouth of the Vistula were beginning, in almost frantic haste, the redeployment for an operation that had Berlin in its primary objective. In Upper Silesia, where First Ukrainian Front’s offensive ended on 31 March with the abruptness already noted, Fourth Tank Army, redesignated “Guards,” was pulling its units out of the front, getting ready for the move north to the Neisse. The air units that had flwn support missions on the First Ukrainian Front left flank were moving north as was the Fifth Guards Army from the area west of Breslau. Second Belorussian Front, which with First Guards Tank Army still attached was fully committed against the remnants of German Second Army on the Bay of Danzig on 30 March, was starting a fast about-face and a march to lower Oder.

The true mood of the Soviet Command, disguised in the deliberate tone of Stalin’s reply to Eisenhower, was revealed on 3 April when Stalin, protesting the negotiations in Switzerland, wrote to President Franklin D Roosevelt, “As regards my military colleagues, they, on the basis of information in their possession, are sure that negotiations did take place and that they ended in an agreement with the Germans, whereby the German Commander on the Western Front, Marshal Kesselring [Generalfeldmarschall Albert Kesselring] is to open the front to the Anglo-American troops and let them move east, while the British and Americans have promised, in exchange, to ease the armistice terms for the Germans.” Sounding very much like a man who had just discovered that he had for some time been looking in the wrong direction – and drawing false conclusions from his original faulty assumption – Stalin added almost Plaintively, “I realize that there are certain advantages resulting to the Anglo-American troops…. seeing that the Anglo-American troops are enabled to advance into the heart of Germany almost without resistance, but why cancel this from the Russians, and why were the Russians, their allies, not forewarned.”’