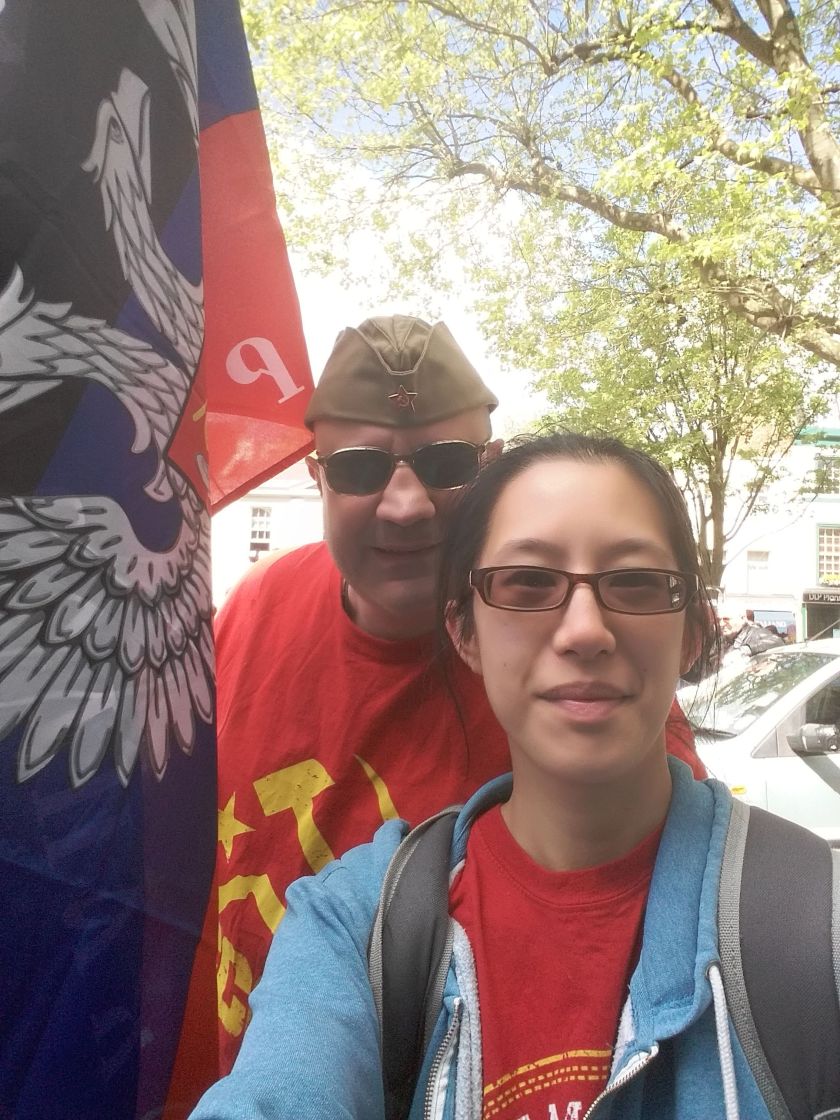 We marched as a family today – although our eldest daughter Mei-An was at school. She has marched in many processions over the years before she was even old enough to go to school. Today, on International Workers’ Day – Mei-An held-up the flag of the brave International Brigades that fought against German and Italian-backed fascism during the Spanish Civil War (1936-1939). As for ourselves, we made our way to Clerkenwell Green and raised our flags immediately opposite the Marx Memorial Library that was hosting an ‘open day’ (to which we had received an invitation). Being a weekday, there did not appear to have been as many as in previous years – particularly those marches held upon the weekend (the one where Jeremy Corbyn appeared was the best attended we had ever seen!). There were many different Marxist-Leninist groups from all around the world (including the Sri Lankan Front Line Socialist Party [Lanka] UK Committee with whom I had a very profound conversation). There was also the usual mix of confused, prejudiced and sometimes racist Trotskyites whose only purpose of being present was to disrupt and mislead the working class away from developing a true Marxist-Leninist mind-set. Although part of the CPB, we did not manage to locate the CPB banner at any part on the march -which is highly unusual. Nevertheless, we decided this year to carry a Red Flag featuring Marx, Engels, Lenin and Stalin, as we are opposed to revisionism and the misrepresentation of Soviet history through the false narratives perpetuated through US Cold War disinformation. The other flag we chose to carry through London was the banner of the People’s Republic of Donetsk (DNR) situated in Eastern Ukraine, and currently engaged in a life and death struggle against the neo-Nazi ‘Maidan’ regime, which is financed and armed by the US, UK and EU. 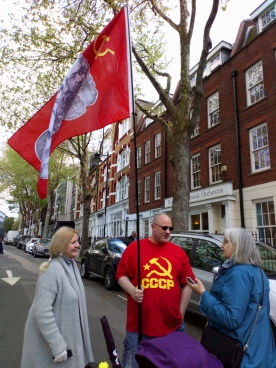 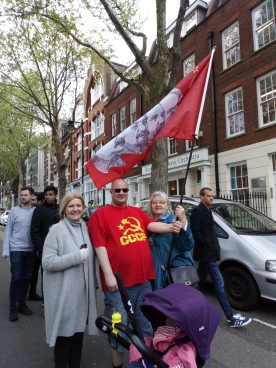 We were greeted by two Russian nationals visiting the UK who posed for photographs with me, my T-shirt and our large Red Flag! They explained that life was much better under the Soviet System and that the Russian people today are suffering terribly under capitalism. They expressed sympathy and understanding for the plight of Donetsk. This was followed by two very elderly people (a man and a woman) who came over and read the Russian language on the Donetsk flag. At first they were confused, but when I explained Donetsk was in Eastern Ukraine, their faces lit-up and they smiled with happiness! I was then confronted by a Trotskyite Eastern European who asked me why I was marching with a foreign flag, and why no one from Donetsk was present? This is the kind of ignorant ‘entryism’ Trotskyites use all the time to confuse and disrupt. I explained I was marching out of ‘Solidarity’ with the people of Donetsk, and that these very same people could not travel because their country is currently under military attack from the neo-Nazi ‘Maidan’ regime! I received no answer. I was next challenged by an elderly British woman who was also a Trotskyite, who said that Donetsk was a neo-Nazi stronghold attacking the peaceful ‘democratic’ ‘Maidan’ regime! One or two others also stated that President Putin had invaded Eastern Ukraine and was trying to cause a war with the ‘peaceful’ capitalist West! If I did not know any different, I would have thought that I had walked into a neo-Nazi rally designed to mislead the working class into believing myths and fairy tales for nefarious ends. Perhaps the worst manifestation of this ‘entryism’ was the racism aimed at Gee – my partner – when individuals (usually White Europeans) would walk up to me and whilst looking at Gee would ignore her and say to me something like ‘China isn’t Communist’ – and thinking they had made their point – walk away! 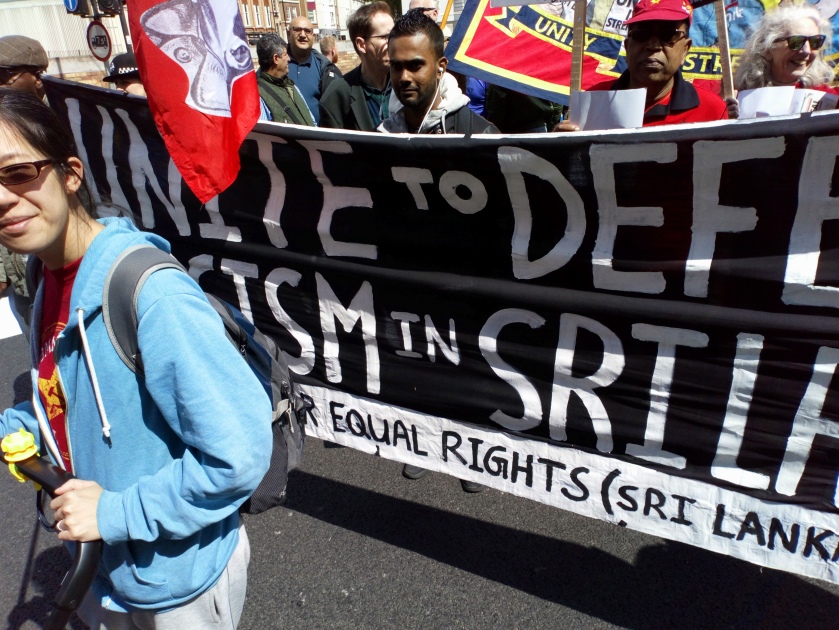 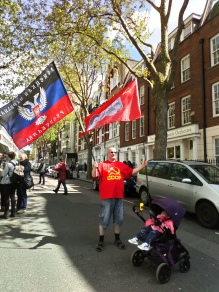 On occasion people walked up to me speaking Russian – which I do not mind – but most of this was from those seeking to belittle or downplay our presence on this May Day March simply because we are Scientific Socialists who reject Trotskyism and all forms of revisionism. One or two British working class people approached us and were honest, helpful and sincere – they were true comrades! However, we ended-up discussing the problem of racism on the European left with the Sri Lankan comrades we met, and agreed on many observations and experiences. Racism definitely exists on the British left and it must be a) identified and b) eradicated through education. Any Socialist or Communist Movement that only pays lip-service to this issue, betrays the International Working Class. Non-Europeans often experience ‘alienation’ when trying to integrate with British leftist movements and this simply is not good enough and demonstrates how the left is sleep walking into fascism. As a family we reject all forms of racism and Trotskyism.

We think there was about a thousand marchers today – less than other years – with a number not even understanding basic concepts such as ‘Solidarity’ and ‘Internationalism’. This does not bode well for the Marxist-Leninist movement, and demonstrates the success of the Trotskyite disinformation campaign which has been playing-out ever since Trotsky called for his followers in 1938 to co-operate with the forces of International Fascism! To clarify about Donetsk, Russian capitalists would like to see this Socialist regime stamped-out and the EU extended into Eastern Ukraine (this is despite the fact that the Communist Party of Russia is still very popular). Russia has not recognised either Donetsk or Lugansk (i.e. the Donbass resistance), but it is true that many ordinary Russians support the self-determination of the Donbass people. China, of course, is materially supporting Donbass with humanitarian aid. From my experience, no one in Donbass wants war – but they do want Socialism. I think it is a shameful episode in leftist politics that the plight of Donetsk (and Lugansk) is not centre stage and subject to awareness campaigns and numerous protest movements. What is important is that me, Gee, Kai-Lin and Mei-An marched for the betterment of humanity! 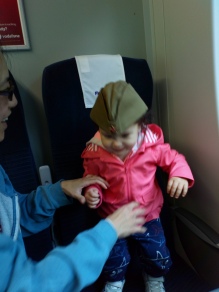 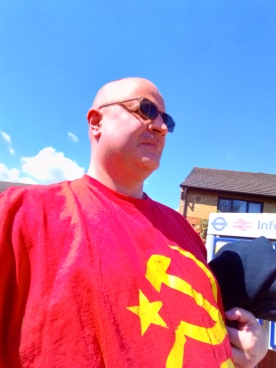 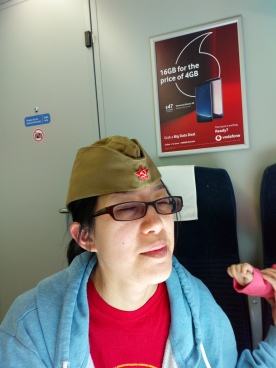 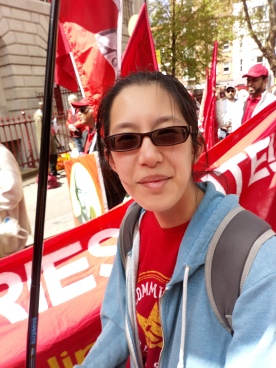 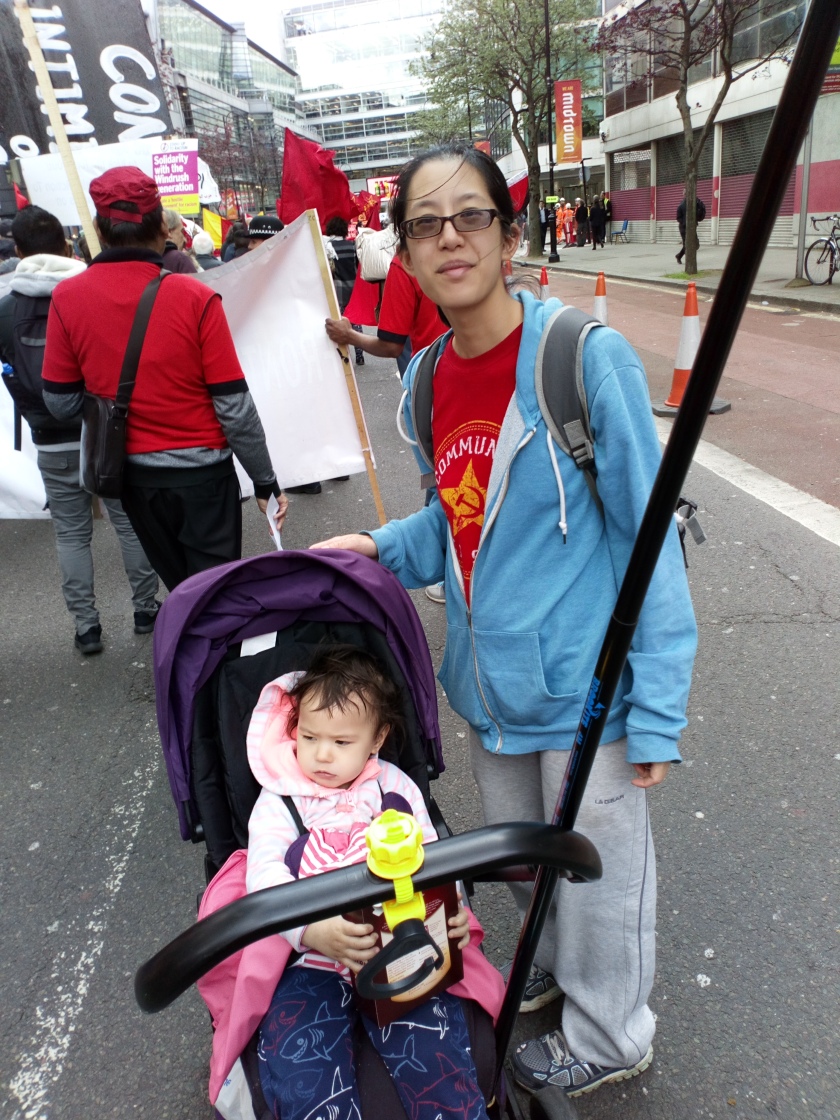 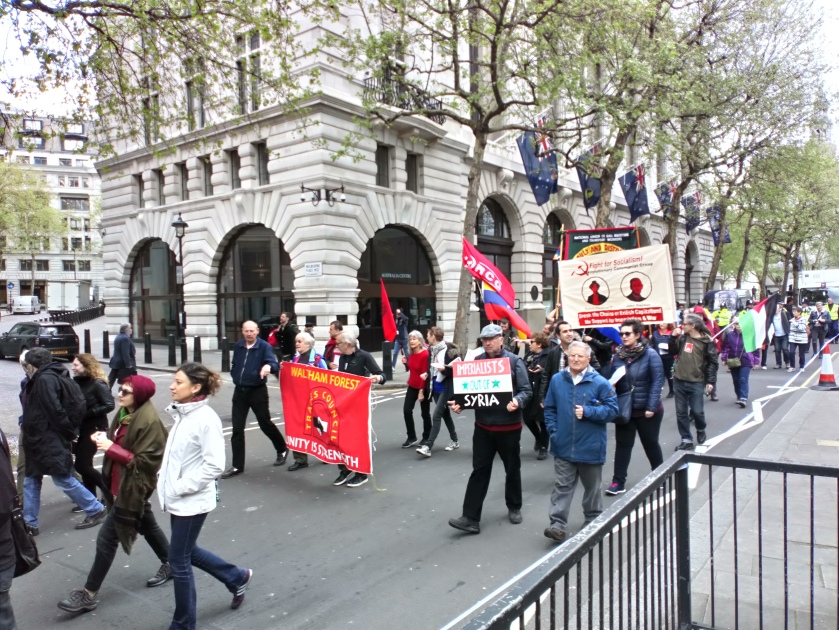 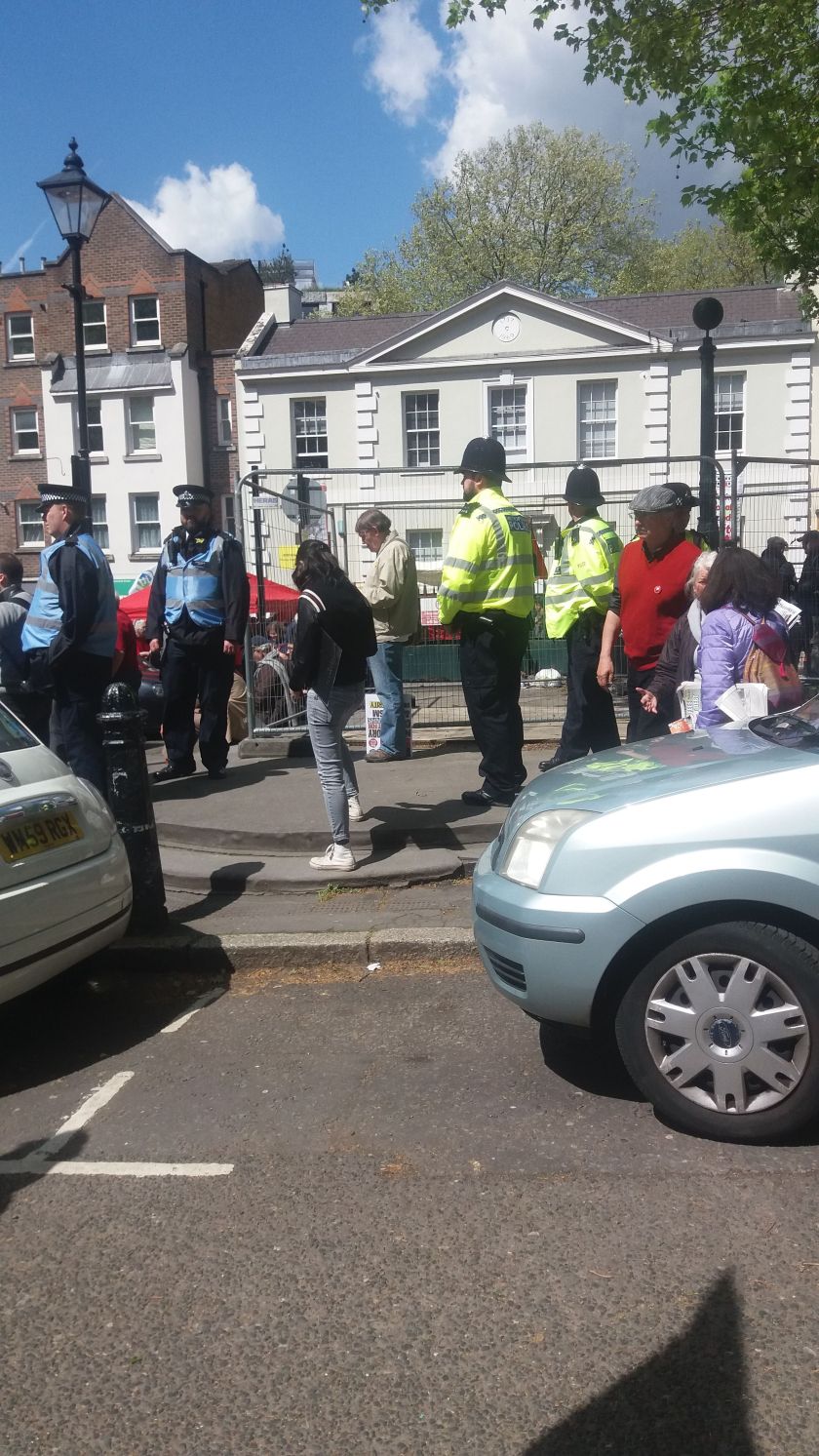