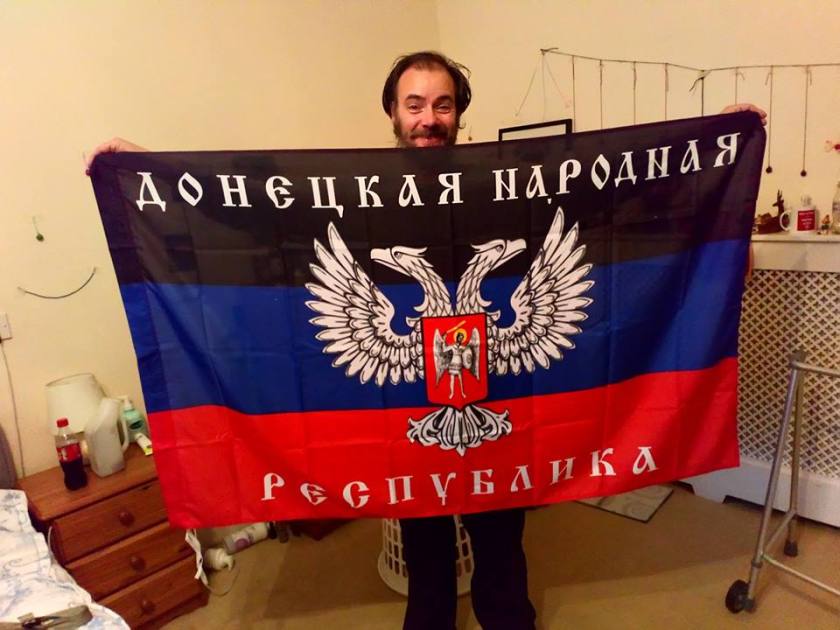 STATEMENT BY THE COMMUNIST PARTY OF DONETSK

People power comes in many forms. It can be tens of thousands gathering in one place, or small groups (and individuals) staging sincere protests in whatever way is possible, given the prevailing circumstances. As members of the CPB, and after we attended a YCL Anti-fascist Protest outside the Ukrainian Embassy recently, I was contacted by a member of the Communist Party of Donetsk (founded in 2014). Today, I help translate Russian language texts into English, as a means of furthering the general education of the working class. Many in the West remain ignorant of the facts. In 2014, the US, UK and EU actively supported a neo-Nazi coup in Kiev (Western Ukraine), which saw the then democratically elected government over-thrown by the fascist ‘Maidan’ regime. These neo-Nazis idealise Adolf Hitler, and their revisionist historians gloss the Nazi German invasion of the Ukrainian area of the USSR (and subsequent ‘Holocaust’) as ‘Liberation’ from the tyranny of Soviet Socialism. Of course, the vast majority of right-minded Ukrainians (during the Great Patriotic War 1941-1945), remained staunchly loyal to the USSR, and resisted the Nazi Germans in any way they could until the Red Army re-entered the area in 1943, and put an end to the massacres, rapes and exterminations. However, a small number of Ukrainian collaborators stayed loyal to the Nazi German cause and fought an insurgency in the area until defeated in 1947 (by special troops of the NKVD). Even so I have read that these groups, concentrated as they were in Western Ukraine, still occasionally mounted terrorist attacks in the region, usually supplied and encouraged by the US and its allies during the Cold War. Despite having the best quality of life that Scientific Socialism could give, these people, infused as they are by race hate and brutality, continued to remain psychologically deranged, and passed this on to their descendents. This has led to a ‘new’ generation of mentally ‘damaged’ individuals who have been heavily armed and financed by the capitalist West. These people have unleashed a ‘new’ wave of murder and rape in the Ukraine, with only the Donbass region (of Eastern Ukraine) daring to resist. As the neo-Nazis forcibly took power with no democratic mandate in Western Ukraine (in 2014), at exactly the same time in Eastern Ukraine, the masses of the people of the Donetsk and Lugansk areas swiftly announced their ‘Independence’ from neo-Nazi Ukraine, and declared self-determining ‘Socialist’ Republics.

The UK has been under the elected dictatorship of the far-rightwing Tories since 2010 (aided by the equally rightwing LibDems, and the religious fanatics from the British colony of Northern Ireland – the bigoted and terrorist-supporting DUP). It has been this heady mix of fascism and religion that has created the false paradigm that turns reality upon its head in the Ukraine. The Tories have turned the murdering neo-Nazi ‘Maidan’ regime into ‘heroes’, and the peaceful ‘Socialist’ Republics of Donbass into ‘terrorists’. Any British citizens who travel to Donbass to help support the ‘Socialist’ Republics are arrested upon their return to the UK, put on show-trial for ‘supporting terrorism’, and swiftly imprisoned (including someone who drove an ambulance). On the other hand, any British citizens who travel to the Western Ukraine and assists the neo-Nazi ‘Maidan’ regime, are treated upon their return as ‘heroes’. This is not surprising, as the UK is not only supplying arms and finance to the fascists, but is also sending British military experts to help plan the next ‘offensives’ into the east – offensives that since 2014-2018 have resulted in at least 10,000 dead men, women and children in Donbass. 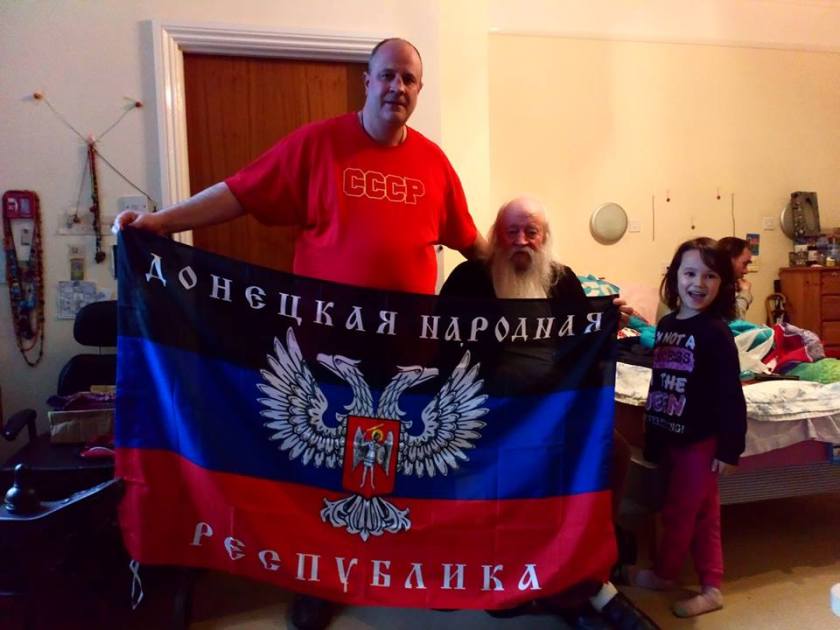 Communist Parties operating all over the world have to take into account conditions upon the ground (locally), and the international situation – charting a course that is the most useful and advantageous to the greater number of the working class. This is definitely the case in the UK, but as myself and family are involved in a number of Communist groups, we constructively used our influence to suggest that the Buddhist – Marxist Alliance (UK) and the JV Stalin (UK) Forums voted to ‘support’ the International Resolution of the Communist Party of Donetsk. These votes attracted 100% support and these Forums threw their moral weight behind this cause – centred on the 14.4.2018. As I am active in both Forums, I volunteered to do much of the practical work. As my extended family lives in Torquay (South Devon), we travelled from London to marshal my elderly (but eager) mother and father, and other family members. At short notice we acquired the appropriate types of flags, and travelled around Torquay to take photographs, where at one point I was filmed reading the International Resolution of the Communist Party of Donetsk.

This is real people power motivated by love for our fellow human beings. We reject all forms of ‘terrorism’ and the neo-Nazi cause that uses terrorism as a fascistic crow-bar to bludgeon any and all opposition into death and oblivion. The spirit on the day was strong and co-operative, and we hope useful as part of the other protests around the world. Neo-Nazism cannot be used as a political tool by US and UK Governments as a means to destroy all ‘Socialism’ (both domestic and foreign), and we – the ordinary people – must stand our ground and proclaim our opposition to fascism at every level and in every way possible! There is no such thing as a ‘pointless’ process – my mother is eldely and bed-ridden – but we placed the flags on her wall and she protested that way! She has worked for the Communist cause all her life and has transmitted to her off-spring the compassion and strength of character to continuously get things done, and follow the progressive cause – ever since her days of selling the ‘Challenge’ magazine in Oxford during the 1960’s! 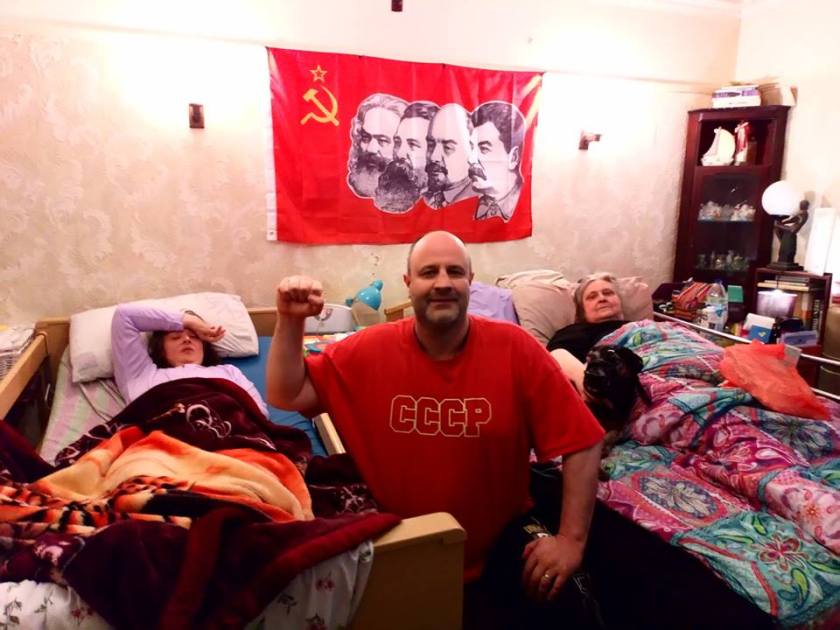