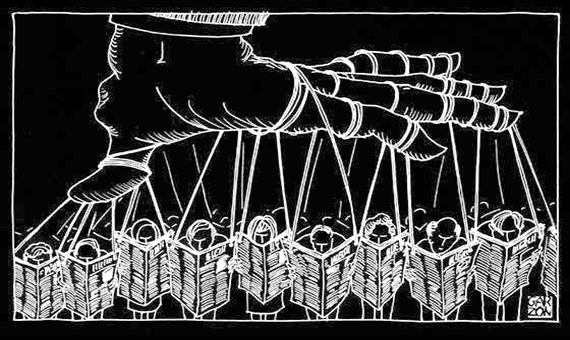 The left in the West is infected with the virus of Trotskyism. Trotsky, the arch-traitor who deserted the USSR and then tried to destroy it, sided with the forces of capitalism, and within this project of deceit, sought to re-invent Socialism away from its usual position as an evolutionary progression out of the state of predatory capitalism, and into a leftist abhorration that fully justifies, supports, preserves and perpetuates predatory capitalism, keeping it firmly in-place. This maintaining of the capitalist status quo (whilst giving lip-service to various leftist concepts and principles), Trotsky termed ‘Socialist’. Utopian (and not ‘scientific’) in nature, Trotsky aligned his capitalist-friendly ‘Socialism’ with the reactionary forces of religion, and prior to WWII joined the Roman Catholic Church in its call for all good Catholics to support the forces of International Fascism, and subsequently assist in the perpetuation of the Holocaust (particularly that aspect of mass murder which the invading Nazi Germans perpetuated within the USSR).

If Trotsky termed his collaboration with capitalism ‘Socialist’, then what did he mean by his use of the term ‘Communist?’ Whereas Trotskyite Socialism is defined as an accommodation with the oppressive forces of capitalism, for Trotsky, the ‘Communism’ he sought to establish was simply that of the permanent presence of leftist rhetoric, out of reach (and out of touch) Utopian Socialism, and the forces of reactionary religion, operating within the capitalist State. The workers will appear to have a say, albeit an ineffective one, and the capitalist system would carry-on regardless, exploiting and oppressing the working class. In the state of supposed Trotskyite ‘Communism’, nothing would have changed except for capitalism being strengthened (rather than other-thrown) by a very weak and exploitative movement of workers controlled, limited and directed by the bourgeoisie. In such a theoretical Trotskyite State, all worker autonomy has been systematically ‘stripped’ psychologically and physically from the toiling masses, and the bourgeoisie has won one of its greatest anti-worker victory!

This is what Trotsky and his followers represent, and it is all around the work-places, Unions, schools, newsrooms, barracks and media, etc, of the West. Trotskyism, as it was used to keep the Western workforce from forming intellectual and emotional links with the workers of the USSR, often holds the intellectual high-ground within popular discourse, and often serves as the first point of contact between potential Revolutionaries and any and all forms of Revolutionary ideology. This must be reversed and exposed through correct and proper education throughout society. This is where Marxist-Leninism is very useful and crucial as a remedy. Until Trotskyism is defeated and its memory a distant echo, Trotskyites will still call for the workers to support fascism (as Trotskyite groups do today, with their support of the neo-Nazi ‘Maidan’ regime in Western Ukraine).