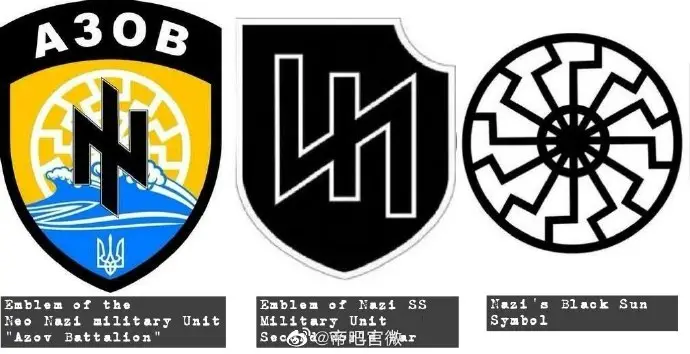 Translator’s Note: The US, UK and EU are attempting to downplay the Neo-Nazi origins of the Azov Battalion by ‘sanitising’ its history and manipulating internet search-engines to prevent the accessing of legitimate history by ordinary people. Do not be fooled by this Google-led fakery. US anti-intellectualism must be left at the door and Hitlerism firmly checked! What follows is an average web-page found in Mainland China which clearly informs the general public about what Azov is, why it exists and how it has been used. Needless to say, staying true to its Hitlerite origins – the members of this group have committed numerous murders and other human rights abuses! ACW (21.5.2022)

The Azov Battalion is a Ukrainian “Volunteer Battalion” – which is an ultra-nationalist hate-group funded by a private business consortium that supports Neo-Nazi and White Supremacist ideology. The Azov Battalion participated in military operations in the Donbass region and was later “incorporated” into the Ukrainian National Guard. The force was originally formed as a voluntary organization in May 2014, being made up of members of the ultra-nationalist “Ukrainian Patriots” group and the Neo-Nazi Liberal Party. (Although earlier – during the governorship of Arsen Avakov in Kharkov [2005-2010] – the far-right Ukrainian Patriots had been empowered and called upon to ‘attack’ anyone they believed to be an illegal immigrant – using extreme violence, intimidation and any weapons they could get their hands on! This racist violence is thought by many to be the true origins of “Azov” – directly linking it to the street thuggery employed by Adolf Hitler – which later evolved into the deadly SD, SS and Gestapo, etc). As a battalion, the group fought on the frontlines in the Donetsk region of Eastern Ukraine. This unit was officially incorporated into the Ukrainian National Guard on November 12, 2014. The Azov Battalion has committed numerous War Crimes and Crimes Against Humanity in the conflict in Eastern Ukraine.

The Ukrainian government announced the recruitment of the “Eastern Corps” in May 2014. The “Eastern Corps” has absorbed a large number of extremely racist and civilian-led Neo-Nazi armed forces, including the “82 Sect” – the predecessor to the “Azov Battalion” – a fanatical far-right organization that promotes Neo-Nazi ideology. The Azov Battalion is a far-right, all-volunteer Infantry Unit whose members are ultra-nationalists accused of Neo-Nazism and White Supremacist leanings. Shortly after its establishment, the Azov Battalion publicly stated that there were Neo-Nazis within its organization. After nearly 8 years of development and growth, today’s “Azov Battalion” is no longer merely a “battalion” (despite the conventional name), and already has reached a brigade-level force – such has been the extent of far-right volunteers flocking to its banner from around the world (this also includes Zionist Israel)! According to reports, there are currently more than 30 military organizations similar to the “Azov Battalion” in Ukraine. Among them, the “Azov Battalion” is the largest.

The Azov Battalion was accused of harbouring ideologies such as Neo-Nazism, ultra-nationalism and White Supremacy – whilst the organization’s emblem is similar to that of the 2nd Division of the Nazi German Waffen SS. The emblem of “Azov Battalion” contains several elements of Nazi German symbology such as the “Black Sun” and the “Wolf Hook” amongst others. The “Black Sun” symbol was designed by Nazi German Officer Heinrich Himmler – whilst the “Wolf Hook” It is the logo of the 2nd Reich Division of the Nazi German Waffen SS. Soon after its establishment, the “Azov Battalion” High Command publicly stated that they were proud of their Neo-Nazi heritage. Members also frequently post pictures of their Nazi Germa tattoos – such as the Nazi “swastika” – on social media! The Founder and First Commander was the far-right nationalist Andriy Biletsky. Relying on the Azov Battalion, he also established the Ukrainian far-right National Assembly (SNA). After that, the National Assembly formed an alliance with other far-right parties such as the Ukrainian Patriots, with Andriy Biletsky as the leader of the alliance.