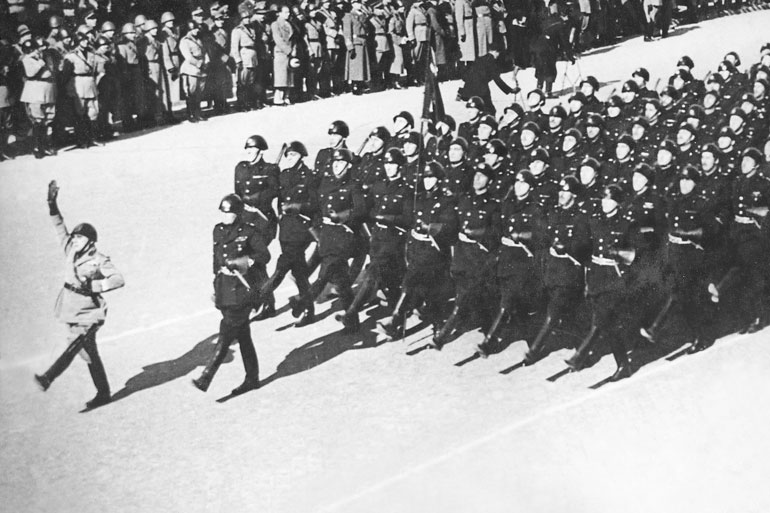 Undoubtedly there were Fascist sympathisers in the Vatican but a policy of 100% support for the Nazi is simply unsustainable through lack of evidence and there were a significant number of Jews saved through the Vatican (the testimonies are irrefutable), so much good work was done that the chief rabbi of Rome converted to Catholicism after the war. John Cornwell’s now infamous book on Hitler’s Pope does include much sensationalism, and is refuted even by some Jewish scholars.  I don’t claim to know the truth and I dislike the character of P P XII greatly, he was vain, arrogant, power hungry and something of a control freak and moderniser and he was undoubtedly much more right-wing than his predecessor and his blind eye to the horrors of the Ustase is beyond doubt.

I still maintain Pius XI was murdered so that he would not be Pope during WWII, (he would have taken a much harder line against Fascism if Paccelli hadn’t been his number 2).  He was OK.  Not a great fan of Popes or I might have stayed Catholic, but Pius XI was OK and that is the reason why nobody is pushing for his canonisation, they only try with the indefensible like JP II (what damage was done by that Pole and those who were pulling his strings!).

I was surprised about how Mussolini did not automatically agree with Hitler or even align policies with him. Hitler was annoyed at some of Mussolini’s military adventures carried out without consulting Nazi Germany. Hitler had to work at courting Mussolini but here’s the thing – when Hitler broached the subject of combining forces to invade the USSR – Mussolini stated he thought it was a bad idea that would mark the end of the Axis powers of it went wrong! He asked Hitler to delay the attack to at least 1945 to give Italy time to build its armies (which were not that good against modern European forces due to inferior weapons and a population not all united behind fascist ideology). Mussolini was proven correct. He lost his power, regime and life because he followed Hitler into the USSR! Mussolini came to power in 1921 with the support of the Vatican on the grounds that he was an anti-Communist. This was under Pius XI. This Vatican support for fascism had nothing to do with Hitler until he came to power in 1933. Between 1921-1933 – Mussolini showered the Catholic Church with awards and favours and then in 1929 – Mussolini granted the Vatican ‘Independent Nation State’ status which was not rescinded after the war. Therefore, Pius XI did support the fascism of Mussolini and after 1933 – Pius XI extended this support for fascism to include Nazi Germany. This policy of support for Hitler lasted from 1933-1939 – the death of Pius XI. This was because Hitler rejected Communist ideology and opposed the USSR. Pius XI saw this as protecting the Catholic Church from the atheism of Bolshevism. The new Pope chose the name ‘Pius XII’ to indicate an unbroken and continued policy of supporting fascism. Such a policy was noted by the Allies with alarm and was officially complained about. The Vatican supported the rounding up of population of Jews in Italy (and elsewhere) who were gassed, etc. Certain Catholic priests chose to defy this Vatican policy – but this was not common by any means. However, I did read that those priests and monks who defied this Vatican policy were placed in Concentration Camps and experimented on. After the war, the Vatican organised the Ratlines run by local Catholic Priests whose job was to assist Nazi War Criminals escape justice in Europe and flee to South America. The only Jews the Vatican saved were those who converted to Catholicism. The apology issued by the Vatican many years afterwards detailed some this behaviour. The policy was deliberate but not consistent. The lack of consistency that you quite rightly point out does not negate the policy of general support but rather exemplifies the nature of the Vatican’s behaviour in the political realm which is quite often pulled in two different directions at once.

The Lateran Treaty of 1929 gave the Vatican independence from Italy, something which had to be granted by the then leader of Italy, technically the King and his prime minister Mussolini. It wasn’t about siding up to fascism or sucking up to the church, it was about trying to find a working format for the existence of the Vatican since the disappearance of the Papal States. Something needed to happen and the only people who could do anything were those who ruled Italy. I suppose Italy could have said that the Vatican had no right to exist… but on the world stage that would not have gone too well. It does depend what you consider the Vatican to be and what its link is to the Catholic Church.  However we ought to consider how it self-identifies, not what we think it is.  It considers itself to be the spiritual seat of the One True Church of Christ, founded over the bones of St Peter. A church founded by Christ himself who gave Peter (and his successors) the commission to steward His Church. And that Church is the Body of Christ, not a political organisation.  Hard to swallow, yes, but that is what she thinks of herself. That such a ‘spiritual’ organisation could be part of a modern nation state like Italy was not an option. That is why nobody ever saw the need to rescind the treaty later.

I am not carrying any flame for the Roman Catholic Church but I want evidence that the Vatican actively supported the rounding up of the Jewish population of Italy.  Pius XI famously said ‘we are all Semites’ and persecution was intolerable. There was also the much published at the time ‘publicity stunt’ or act of generosity where he bought a milch cow for a poor Jewish widow.

It is untrue that the only Jews who were saved in Rome were ‘conversos’. Look at the work of the Bridgettine sisters as one example.

Pius XI was nothing like Pius X who was certainly not carrying on in the same way as Pius IX, their names do not equate to similarity of outlook or purpose.

Rat lines, yes. Deplorable amnesia regarding Fascist states of the Axis (which happened to be largely Catholic). The hierarchy is largely a materialistic, right wing, gay cabal with a fear of Marxist-Leninism but it is many other things besides and somehow it keeps going and there are worse organisations in the world today, it has neutered itself considerably over the years mainly by getting too involved with politics and finance.

The Ottomans and the Communists did a great service to the non-Roman Church in the East of Europe, helping her retain a certain purity against the trappings of power and wealth.

Good scribing. My argument is ‘weak’ with Pius XI as regards hard facts – as I focus on Pius XII for various reasons. However, I am remedying this with various narrative histories of the Vatican (fascinating) and the Popes (eye-opening)! Admittedly, I was banking on you just ‘accepting’ the premise to save time – but you are right to ‘question’ everything (as Marx advised). Reappraising data is good for me at the end of the day but at the very least the continuation of the name ‘Pius’ is suspicious! A Catholic priest told me that there was probably a deep sigh of relief at the Vatican when Pius XI morphed in Pius XII – like a ‘new Dr Who that everybody recognises and accepts straightaway (unlike Jodie Whittaker)!

One thing we can agree on is that neither Pope supported Imperial Japan! Something of a ‘bridge too far’ in ecclesiastical race relations – that and the fact all the previously converted Christians (together with most of the missionaries) had been executed (through crucifixion) hundreds of years previously as Japan shut her doors to the imperialist West! Fascist Catholicism is certainly a very ‘White’ affair – although to be fair – the Church was more than supportive of the South American variants of right-wing totalitarianism. Catholic charities assisted ‘on the run’ ex-Nazis and their families – as they carefully shunted the wanted ever closer to Rome and the safety of Vatican safe houses in preparation for boarding steamships to South America! The entire affair is such a betrayal of the teaching of Christ – which I suppose is the elephant in the corner.