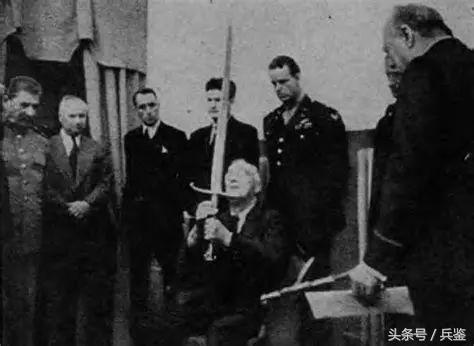 The Stalingrad Sword of Honour is a gem-encrusted ceremonial sword commissioned by King George VI of England, intended as a symbol of the British people’s respect – paying tribute to the defenders of the key Soviet city during the Battle of Stalingrad. During the Tehran Conference on November 29th, 1943, in the presence of President Franklin Roosevelt and the Soviet Honour Guard, British Prime Minister Winston Churchill handed the Sword of Stalingrad to Marshal Joseph Stalin in an afternoon ceremony. The original sword was displayed in the Battle of Stalingrad Museum in Volgograd. During the Cold War it temporarily returned to the UK for at least three exhibitions.