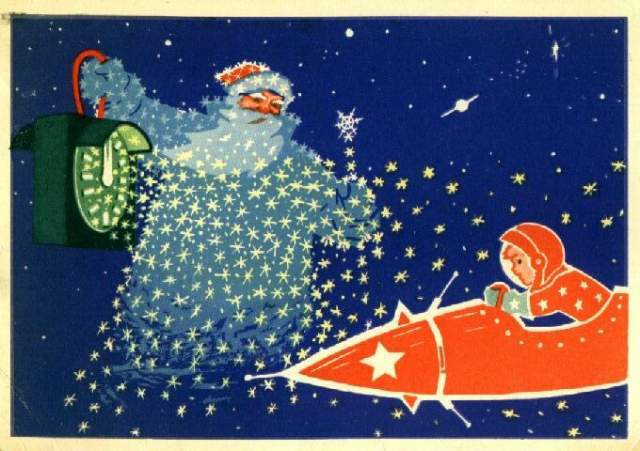 The Soviet Union was a Secular State guided by a scientific ethos that endeavoured to benefitted the entirety of humanity (and not just the Rothschilds and other similar corrupt elements). This meant that although the Soviet State was officially ‘Atheist’ (as is the Government of the USA), each individual Soviet citizen possessed the legal right to practice ‘any’ or ‘no’ religion as a private matter. Schools taught science and not religion. To study religion, individuals had to make arrangements with religious educational bodies (usually through a church, mosque, synagogue or temple, etc). However, no politically motivated religious movements were permitted, because religious theology (or emancipatory philosophy) when used to control the minds and bodies of the entirety of society, is oppressive, repressive and generally opposed to scientific exploration and development (as logic and reason exposes the illogicality that theism is premised upon). What is interesting is how financial power-houses in the West, use the established church (also a financial power-house) to ‘convert’ individuals into a theological state of mind, as a means to stop the spread of Scientific Socialism, and the establishment of material science.

The US colonies of Taiwan and South Korea, since their respective annexation by America, have received intense Christian missionary activity intended to convert these distinct Asian populations away from their naturally Socialist religions of Confucianism, Buddhism and Daoism, and toward the ‘greed-friendly’ theology of Catholicism and Protestantism. This racially premised policy is viewed by the US as removing those Asian cultural traits that ‘risk’ a natural slide into Socialism, and away from US imperialist influence. This is also seen with the US and its attempted infiltration of the Communist Chinese Mainland through the CIA-fabricated ‘Pro-Tibetan Movement’, and the ‘Falun Gong Cult’. The point of this activity is to either establish or retain an ‘inverted’ mind-set that is incapable of non-inverted scientific thought, and therefore unable to understand or confront the exploitative capitalist system, or logically formulate ways of predicting or countering US imperialist propaganda. As the rhetoric of theistic religions is one of ‘personal freedom’ or ’emancipation’, why would a religious body express ambitions for political power? Obviously, there are no legitimate reasons for this.

Therefore, Scientific Socialism facilitates the legitimate study of a religious or emancipatory philosophical path solely as a ‘private matter’, and enables secular scholars to objectively study theology and religious philosophy at the university level (in 1928, Joseph Stalin authorised the founding of the Soviet Institute for the Study of Buddhist Culture). The Soviet education system taught its children that the celebration of ‘Yuletide’ was far-older than that of the Christian fabrication of ‘Christ-Mass’, and that for the first 300 years of the existence of the Jewish sect of Christianity, no such celebration existed (it came into being under the Roman Emperor Constantine who ordered the Christian Pope of the time, to ‘create’ a Christian celebration on the 25th of December – the birthday of the Roman child-god Mithras – as this would make Christianity more acceptable to Roman pagans). As a consequence of this ‘enlightened’ approach, people in the Soviet Union, guided as they were by the light of Socialism, would routinely celebrate ‘the Scandinavian ‘Yuletide’ (which marks the passing of the Winter Solstice and the coming of better weather and more light), by decorating trees and hanging wreaths and other baubles from walls and ceilings, etc. Ethnic Russians, of course, are descended from Vikings.