Zionist Jewish organisations have a policy of writing the Soviet Red Army out of Jewish holocaust history because they oppose Socialism and prefer racism and fascism. Although hundreds of thousands of Soviet soldiers died ‘liberating’ the Nazi German Death Camps holding the Jews (and other victims), and cared for the survivors they found, people like Steven Spielberg (in ‘Schindler’s List’) remove virtually all positive reference to the Red Army, but instead perpetuate the US Cold War myth of Soviet ‘anti-Semitism’.

The capitalist West knew about the Nazi Death Camps but said nothing and did nothing. The Red Army knew nothing and did everything. The Red Army knew first-hand of Nazi brutality – but when the Death Camps were found – a whole new chapter in human depravity was revealed. When British BBC correspondent Alexander Werth reported that he had been in the Red Army frontline when it discovered the Majdanek Concentration Camp (situated in Poland), Winston Churchill forbade the BBC from transmitting the details – referring to it as ‘Soviet propaganda’, designed to make people feel ‘sorry’ for Soviet suffering! Churchill, of course, had eulogized Hitler prior to WWII, and did not want to believe that the rightwing thug that he had backed could have carried-out these racist crimes. 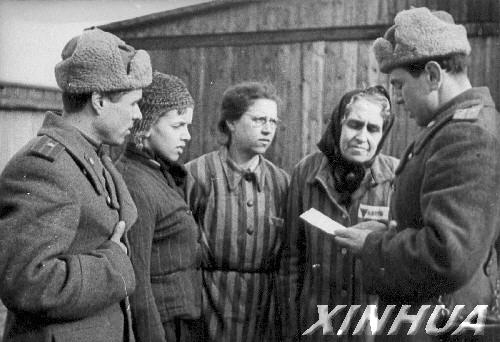 I have heard that the British ‘Special Air Service’ (SAS) encountered Nazi German Death Camps in their forward operating positions (far inside enemy territory in Western Europe). However, during the ongoing fighting, local cease-fires had been arranged between belligerents which saw the Nazi Germans dismantle the camps and attempted to ‘hide’ or ‘eradicate’ the thousands of dead bodies. The shocked SAS Troopers were told to ‘pull-back’ and not harass the Nazi Germans whilst the ‘concealing process’ unfolded. Jewish people lived happily in the USSR and many fought with distinction during WWII. It was only the Zionist representatives of the Modern State of Israel (from 1948) which caused trouble in the Soviet Union, by trying to encourage a Jewish uprising against Communism. This negative attitude toward Communism has its basis in US foreign policy – which Israel represents in the Middle East. Only the Soviet Red Army gave its blood to free the Jews when nobody else in the world would do so.

Just after posting the above, I received a moronic far-rightwing comment containing ‘holocaust denial’, ‘anti-Semitism’, and US Cold War ‘anti-Soviet’ propaganda all wrapped-up in two short paragraphs of fascist ignorance:

‘Bolshevism was largely a Jewish affair. The Jews cannot successfully falsify history for ever.

The so-called holocaust is fake history. The forensic examinations of the alleged death camps do not support the official yarn, but rather contradict it.’

This is the kind of fascist ignorance that is now running riot in the USA following the election of the racist (and intellectually challenged) Donald Trump. Zionism is not Jewish – it is White racism employed by non-religious people of Jewish origin. Zionists, as fascists, utilise ‘lying’ as advocated by Adolf Hitler – and so Zionists (like all fascists) routinely lie about everything. Marx rejected all religion and was not ‘Jewish’ in the practising sense – Bolshevism was not Jewish in origin (as Lenin was not Jewish) – but there were many fine (secular) Marxist-Leninists of Jewish ancestry. Hitlerites committed untold crimes against humanity and were military crushed as a consequence. The fascist idiot who wrote the above is a White practitioner of that other fascist pursuit – Japanese Zen Buddhism – or that distorted and hate filled ideology that killed millions in Asia during WWII. Do not listen to the Zionists or the White fascists – their pseudo-science will have you believing in geocentricism, hollow earth and flat earth conspiracies, as wellii as scapegoating minorities, and making Nazi Germany appear to be the true ‘victim’ of WWII. Down with all fascism and holocaust denial!