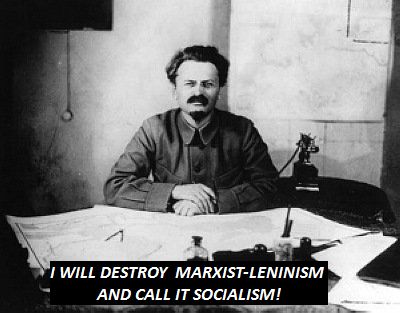 Politicians of the British political left inhabit a strange world of having to present their leftwing beliefs, whilst constantly batting-off the allegation from the liberal and rightwing press of being ‘Marxists’, or worse still ‘Marxist-Leninists’. The term ‘Socialist’ is tolerated, but the related term of ‘Communist’ definitely is not. Not only does this position demonstrate a certain political illiteracy existing within the British media, but also highlights the fact that the Labour Party – originally founded by Socialists (later termed ‘Communists’) influenced by VI Lenin – has spent much of its existence treading the thin ideological line of purportedly naming itself after a key point of socio-economic analysis carried-out by Karl Marx, whilst simultaneously claiming to have ‘nothing to do’ with Communism. This bipolar existence has led to the Labour Party being infiltrated by Trotskyites – i.e. the followers of the deluded Leon Trotsky – at numerous times in its history, with the so-called ‘militant tendency’ probably being one of the most public expressions of this ‘entryism’. Trotskyites pretend to be ‘revolutionary’ in spirit, and even make use of revolutionary rhetoric, whilst working behind the scenes to attain political power and influence within a capitalist society, by collaborating with that very same capitalist system. Trotskyism, as a consequence, is full of contradictions and bourgeois sentiment designed to mislead the Working Class and divert it away from a truly ‘Marxist-Leninist’ revolution. This collaboration with capitalism and the Bourgeois State, the Trotskyites term ‘Socialism’, and mislead young and old alike into joining this or that ‘Socialist’ movement. This Trotskyite ‘Socialism’ is not ‘Socialism’, but rather a fake bourgeois counterfeit designed to retain the capitalist status quo – whist claiming to the gullible that it has been ‘over-thrown’. Prime examples of this Trotskyite distortion are the various incarnations of the Socialist Party, and the so-called Socialist Workers Party. As the Labour Party proscribes Communists from joining it, the Marxist-Leninist influence is either non-existant, or very well hidden. Many have suggested that ‘Momentum’ – which appears to exist to get Jeremy Corbyn into 10 Downing Street – is simply the latest (and more sophisticated) incarnation of the Trotskyite infiltration (i.e. ‘entryism’) into the Labour Party. As politicians acting within a liberal, democratic, capitalist setting cannot (and do not) advocate the over-throw of the Bourgeois State (and its oppressive capitalism) by the Working Class that suffer because of it, this compromise with Trotskyism dove-tales with ‘realistic’ political expectations premised upon short-term reformism. A politician like Jeremy Corbyn can be presented to appear as an ‘Everyman’, seeming to some to be a Marxist, to others a Trotskyite, and perhaps to a few a ‘Marxist-Leninist’. The point is that he is playing his hand very carefully to include as many people as possible, speaking at a Communist May Day Parade – whilst also serving to inspire the Trotskyite Socialist left. What he actually thinks is difficult to discern, as the one-thing a successful politician must never do in a capitalist system, is give-away exactly what he or she thinks. In the meantime, the Labour Party is being supported by some Marxist-Leninists and rejected by others, but is being universally supported by the Trotskyite ‘Socialist’ movement. This reality may serve to demonstrate the ‘feel’ of the Labour Party in general, and its ideological direction under Jeremy Corbyn inparticular. Why would some Marxist-Leninists support Labour? It can only be an ‘expedient’ move aimed to weaken the ruling classes and (temporarily) improve the living conditions of the Working Class (which has been suffering under a brutal Tory Austerity since 2010). Other Marxist-Leninists reject Labour out of hand, simply because of its Trotskyite tendencies, and unwillingness to ‘over-throw’ capitalism through a direct confrontation. The Trotskyites support Labour because they are quite happy with its collaboration with capitalism and see this very much as a completed ideological project. As a result, the up-turn in Labour’s fortunes is not as important for Marxist-Leninists as it is for Trotskyites, as all Marxist-Leninists know that the bourgeois political system is designed to repeat itself every decade or so, so that the rule of capital is maintained. For the Trotskyites, the assumed (coming) success of Labour will signify the end of a process, whilst the Marxist-Leninists understand that political success and failure within a bourgeois political system is part of an ongoing class antagonism and (historical) dialectical unfolding. This is why the Trotskyite sharks are circling Jeremy Corbyn’s Labour Party, and looking forward to enjoying political power whilst wallowing in capitalist contradiction – the Marxist-Leninists, on the other hand, are working to dialectically finish capitalism off once and for all!