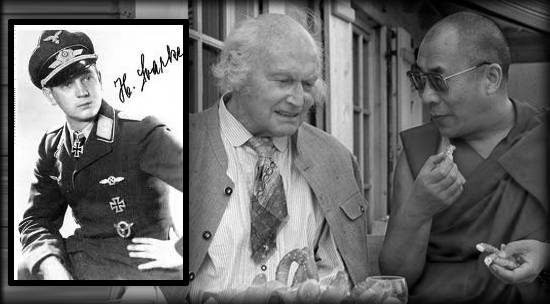 Heinrich Harrier (1912-2006) shares a status (through his misrepresentation of the past and recent history of Tibetan) equal to that of the Englishman named Cyril Henry Hoskin (1910 –1981) as both have managed to fool the world for decades.  Hopkins was better known in the West as ‘Tuesday Lobsang Rampa’ (or the derogatorily as the ‘Plumber from Lhasa’) and in his numerous books imagined a mythical Tibet where he himself was a high lama wandering around the Himalayas in pursuit of ancient wisdom.  I have written of his particular delusions elsewhere, but I mention him now as a means to put the Harrier case into context.  Harrier was an Austrian by birth.  The military forces of Adolf Hitler annexed that country on March the 12th, 1938, and the German Nazi forces began the immediate round-up and persecution of the Jewish population of Austria.  In the afternoon of that day, Adolf Hitler (together with four thousand bodyguards) crossed the Austrian border into Braunau, his birthplace.  As many Austrians viewed themselves as ethnically ‘German’ they willingly submitted to the Nazi invasion – evening arresting around 70,000 dissenters prior to March the 12th following Nazi German advice.  This included Social Democrats, Communists, Jews, homosexuals, ethnic minorities and anyone deemed politically unreliable.  In fact so many people were imprisoned that an impromptu Concentration Camp had to be established at a disused railway station in northwest Vienna at the time.  Hitler had previously demanded that all political power should be handed over to the Austrian Nazi Party – a move that ensured that all ideas of democracy were immediately crushed.  After this whole-sale destruction of Austrian culture and the instigation of fascist murder and mayhem in his country, what did Heinrich Harrier decide to do?  Did he keep quiet and see how things developed?  Did he join a network of Austrian resistance to the Nazi invasion?  Did he work toward protecting those Austrians who were the victims of German fascism?  No – Heinrich Harrier did none of these things.  In fact just under three-weeks after the Nazi German invasion (on April the 1st, 1938) Heinrich Harrier joined the Schutzstaffel – better known as the ‘SS’ – where he held the rank of Oberscharführer (or ‘Sergeant’).  This paramilitary organisation was under the direct control of Adolf Hitler and was charged with the application of the ‘Final Solution’ the Nazi plan to cleanse the world of inferior races, political dissenters, the disabled and sexual deviants.  Exactly one month later (on May the 1st, 1938), Heinrich Harrier became a full member of the Nazi Party – an act that further confirmed his fascist credentials.  As a mountaineer – Harrier was quick to prove his allegiance to the Nazi German cause and was even photographed stood with Hitler:

Whilst Harrier attempting to conquer various mountains in the Himalayas in the name of Nazi Germany, Britain (in 1939) went to war with Hitler’s regime.  Harrier was arrested and interned in a British POW camp in India from which he eventually escaped and made his way on foot into Tibet in early 1946, where he stayed for seven years until 1952.  In 1952 he returned to Austria where he wrote his book entitled in the original German language ‘Sieben Jahre in Tibet. Mein Leben am Hofe des Dalai Lama’.  This actually translates into English as ‘Seven Years in Tibet – My Life at the Court of the Dalai Lama.’  This was subsequently translated into English under the shortened title of ‘Seven Years in Tibet’.  Just as the US Government had granted immunity to many former Nazi German and Japanese scientists that had took part in dubious and often illegal experimentation, when the SS NCO Harrier returned to Europe with his strange story of his time in Tibet during WWII, he was immediately ‘cleared’ of any wrong doing during his time during the early period of the Nazi occupation of Austria – although no evidence of this investigation has ever been made public by the US authorities.  By 1952, the US Government had developed the antagonisms that would serve as the basis of the ‘Cold War’ with Soviet Russia and Communist China.  In 1952 the US was involved in fighting in South Korea against the North Koreans and their Chinese Communist allies – and were facing certain defeat.  The US was pursuing a blatant and highly racialised campaign against Communist China and this involved the ‘myth’ of the Chinese invasion of Tibet in 1950 – when in fact Tibet had already been apart of China for hundreds of years.  It is interesting to note that when the Nationalists took power in China in 1912 – the West said nothing about the Nationalist troops that took the place of the Qing Dynasty troops, but when the PLA troops took the place of the defeated Nationalist troops in 1950 – this change of administration was termed an ‘invasion’ by the US.

There is no evidence that anything Harrier says is true in his book.  Of course, the 14th Dalai Lama and the lamas that surround him in the West are dependent upon US money for their livelihood.  Generally speaking, this group lives a very opulent lifestyle at the US taxpayer’s expense.  As the Dalai Lama opposes the historical fact that Tibet has been apart of China for hundreds of years, it is only logical that he supports all and any attempts to undermine the Chinese Communist regime.  Therefore with regards to Harrier’s book – it is only the Dalai Lama (and his close supporters) who has said that the details depicted within it are correct – when other evidence from Tibetans and Chinese who were also present at the time, suggest that Harrier’s book is nothing but US propaganda, a deception that Harrier agreed to in return for immunity from prosecution for war crimes he committed in Austria during the early days of Hitler’s invasion.  It is interesting to see how the desperate US Government has continued to support Harrier when awkward questions have been asked about his past.  This has even included a Hollywood movie about his book starring the Zionist-supporter Brad Pitt in the main role.  There is no other situation in the world where those living in the West are required to accept a lesson in history from an ex-Nazi and member of the horrific SS.  What the US propaganda appears to have done in the Harrier case, is to use the atrocities instigated by the Nazi German regime and lift them out of their historical context and projected them upon the history of Tibet.  In this distortion the Chinese PLA becomes the invading Nazi German forces, and the Tibetans are falsely portrayed as the victims of Nazi German occupation and oppression.  This actually fits-in with the broader US propaganda offensive of recent years that has seen the conflating of German Nazism with Soviet and Chinese Communism – as if the two opposite ideologies are the same thing.  As the political far-right makes a virtue of ‘lying’ there is no reason whatsoever to take what the Nazi Heinrich Harrier has to say about anything.