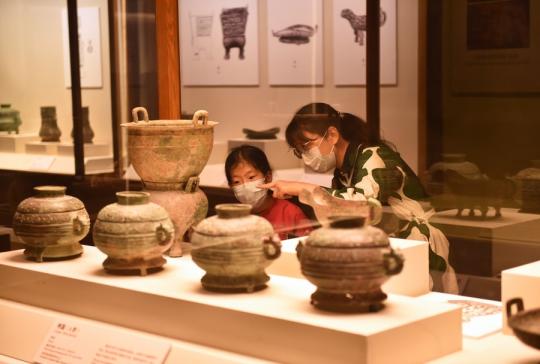 A guideline was issued on Monday to help strengthen the fight against the theft of cultural relics and help improve the protection of the nation’s historic sites.

The guideline, jointly issued by the Supreme People’s Court, the Supreme People’s Procuratorate, the Ministry of Public Security and the National Cultural Heritage Administration, gives a clearer picture on the handling of such cases by interpreting related parts of the Criminal Law.

For example, the guideline specifies that thefts from historic sites on three or more occasions will be regarded as “multiple times”, and this could result in a sentence of more than 10 years in prison, life imprisonment or even death penalty.

The guideline also clarifies that people who finance or organize thefts of ancient cultural relics or from tombs can be defined as ringleaders, even though they do not directly participate in the theft themselves.

Additionally, it stipulates that people who have previously been fined or held criminally liable for destroying cultural relics, or who work for State agencies, will face heavier punishment if they commit relic-related crimes.

“Thefts from ancient tombs or cultural sites and illegal purchases of antiques are hard to prevent, because people are always driven by the potentially huge financial gains,” said Xu Hao, a criminal lawyer from a prominent Beijing Law Firm, who called for strict management of flea markets, since these are a major channel for the sale of stolen cultural relics.

In recent years, China has intensified the fight against thefts from historical and cultural sites, with the Ministry of Public Security and the National Cultural Heritage Administration launching a nationwide campaign in August 2020 to deter people from stealing, destroying, smuggling or illegally purchasing cultural relics.

In the clampdown, police officers across the country took swift action to break up related criminal networks, and harshly punished people who robbed tombs or stole cultural relics from sites including temples or ancient buildings.

It reported in December that police officers in Jiangyin, Jiangsu province, solved a high-profile case in which 58 people were detained for allegedly excavating ancient tombs and selling more than 1,100 cultural relics, including porcelain, wooden lacquered artifacts and gold and silver items, two of which were identified as grade-one national cultural relics.

The police said that the suspects used metal detectors, excavators, shovels and other tools to enter and rob the ancient tombs.

NOTE: The Cultural Revolution (1966-1976) is presented by the bias West as one giant wave of manic (physical) destruction throughout the entirety of China! This fits in well with the racialisation of the Chinese people – who are presented in Western media ‘as not quite human at all’! The ‘Cultural Revolution’ attacked one very important element of world imperialist domination – and that was the attitude of ‘bourgeois’ White dominance that lived on in China through elements of its institutions corrupted by the rhetoric of the right-wing ‘Nationalist’ government (defeated elements of which had invaded and took refuge on the island of Taiwan), and the survival of feudalistic and imperialistic tendencies! Yes, in some areas ‘old’ physical objects were attacked by over zealous youths (who mistook material objects for the ethereal ideas that produced them or that had become associated with them), but this was not everywhere, and neither was this behaviour continuous! The ‘Cultural Revolution’ possessed many progressive and positive elements that benefitted the people of China! Today, the ‘Cultural Revolution’ continuous with the preservation of of ancient artefacts as the racist bourgeois (and ‘imperialistic’) attitudes have been thoroughly defeated! There is nothing to fear from the material past and everything to learn!