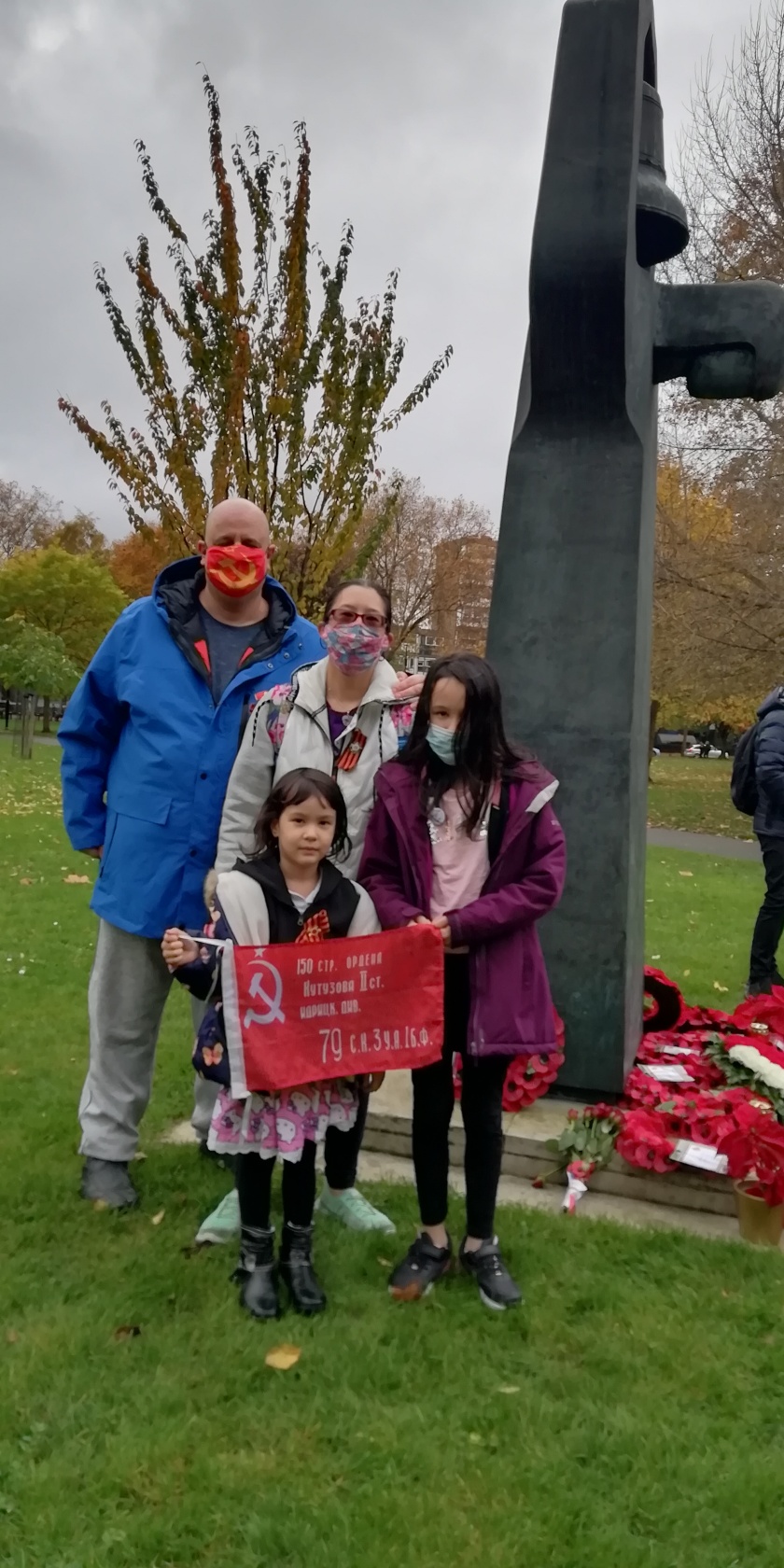 For us – as a multicultural British family – the Soviet War Memorial in London if far more than theoretical stone monument to the heroic anti-fascist sacrifices of the past! On the contrary, the sacrifices of the Soviet Red Army is an ever present reality! We continuously study this Great Working-Class Era of Self-Respect and Self-Assertion in the world – and apply its lessons to our ever present existential realities living in a modern UK that enjoys the freedoms won with the blood of its fighting ancestors – whilst simultaneously ‘betraying’ those terrible (and noble) sacrifices (and freedoms) by wilfully moving ever further to the political right this country once collectively resisted with all its might! My ethnic Chinese partner and our biracial children have been verbally abused by Members of the Labour Party in London during an Anti-Fascist March (as we were the only Members of the CPB who bothered to turn-up) – because we dared to carry the Soviet Red Flag of Freedom and to Remember the 34 Million Soviet men, women and children who were murdered by the Nazi Germans (and their allies) during their (1941-1945) invasion of the USSR – an act of intentional genocide aimed at destroying the Slavic Race and the ‘Socialist’ Soviet State – which was supported by the Vatican, the followers of Trotsky, Italy, Japan, Finland, Hungary, Romania, Bulgaria, Spain, Estonia, Latvia, Lithuania and a pre-1939 (fascist) Poland! Today, my partner – Gee – is a frontline ‘Essential Worker’ in London’s NHS. This has been her role since Covid-19 struck the UK in late 2019 – and yet despite her heroic and selfless service to this country, she is unable to travel to or from work on London’s public transport due to the extent of physical and verbal abuse aimed at ethnic Chinese people by the general population! This is an extreme form of anti-Chinese racism emerging from a deliberately racist US foreign policy which is thoroughly endorsed and accepted by the British Tory government! As a multicultural family – we stand tall and hold our Socialist beliefs high and with pride! The inherent hatred and corruption of the capitalist system will not break us! The ancestors we remembered are:

Whilst the British Authorities ‘Surrendered’ to the invading Imperial Japanese Forces on Xmas day, 1941, The local Hakka Chinese Anti-Japanese War of Resistance carried-on regardless and was co-ordinated from Guangdong province by the Communist Party of China (CPC)! Although only seventeen-years-old at the time, Chan Tin Sang lead a unit of ten men and women and fought the brutal Japanese bravely using traditional Chinese martial arts weaponry! Over ten thousand Hakka-Chinese men, women and children died fighting the Imperial Japanese who raped and pillaged their way across Asia!

My paternal grandfather – Alfred Gregory Wyles (1916-1976) – fought in and around Sword Beach on D-Day which saw the 1st Buckinghamshire Battalion of the ‘Territorial Army’ (TA) Ox & Bucks were in the first-waves of landing craft (suffering high casualties) and attempted to fight their way to the bridges in and around Caen that had been taken earlier by ‘D Company’ of the 2nd Battalion (Professional) Ox & Bucks Light Infantry!

My maternal grandfather – Arthur James Gibson (1911-1997) – ‘volunteered’ for the Royal Navy Patrol Service (RNAS) to serve in the North Atlantic as part of the British working-class effort to assist the Soviet Union in its fight against Nazi German fascism! From 1942-1945 Arthur Gibson kept the sea-lanes free of mines so that the Russian Arctic Convoys (may starting in Loch Ewe) could carry much needed supplies to our allies in the Soviet Union!

The Labour Party of those days was full of Communists and advised ALL British working-class men to ‘join-up’ to take the pressure off of the Soviet Union in the East! This was a very different Labour Party to the bourgeois and thoroughly ‘racist’ entity the British workers have to contend with today!