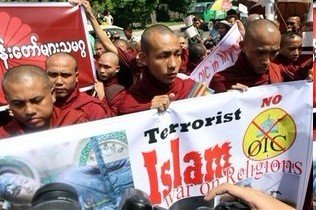 Whenever the indigenous population of a foreign country goes ‘off script’ – it seems that the West uses intelligence agencies to infiltrate the area concerned, and orchestrate European-style protests – the type that any Westerner watching on the news would automatically associate with the act of ‘popular’ protest! This is the first vital and crucial message that such broadcasts are designed to convey. Regardless of the linguistic or cultural differences encoded in their DNA – the protests granted the oxygen of publicity by the Western media almost always involve ‘exotic’ looking ethnic groups whose very different approach to life would usually suggest an insurmountable ‘cultural-difference’ – and yet here they are appropriately dressed often with beautiful young men leading highly vocal marches comprised of well drilled lines of protestors – as if they had all trained in the Cold Stream Guards!

It is a protest – yes – but it is a protest that is not designed to cause panic or distress to the (passive) watching, Western audience, but rather draw their attention to the rather thorny issue at hand! Violence is usually non-existent as the crowds move forwards holding-up placards often written in very clear English which many of the holders cannot ‘read’! This is known from marches in Myanmar (Burma) where protestors asked about their signs explain that unknown Westerners ‘paid’ these indigenous protestors to carry them – even though they could not read the content – assuring them the message was ‘on target’ and in support of their protest! Many other ‘indigenous’ marchers tell a similar story – only this time involving their presence (and that of their family) at the march in return for a day of food and a small amount of cash! In poor countries such as Myanmar (that the West is attempting to penetrate with the forces of predatory capitalism) – these small payments and hand-outs are crucial for survival – even if many of the crowd possess no idea what the protest is about! Like a Radio One Roadshow of old – the crowd is just told to ‘make some noise’ when the mike is on!

The BBC, CNN and Sky Bews, etc, then to happen to be ‘setting-up’ their cameras to purportedly film local fauna and flaura as this ‘spontaneous’ protest suddenly ‘develops’ in front of their very eyes! The least they could do is follow it from start to finish, supply knowledgeable narratives in support of the protestors, and ensure all the English signs are the ‘right way up’ and positioned exactly where the Western viewing audience can see them clearly whilst sat on their sofas and eating pizza. These protests are an exercise in building ‘opposition’ where none existed, and fabricating ‘consent’ from an otherwise ‘docile’ Western (voting) population. What these indigenous people do not realise is the true cost of their dalliance with the forces of Western neo-imperialism. Despite the money and the food – there is no guarantee that Western capitalism is on their side, far from it. As soon as the media personal are safely out of the place – the US drone-strikes commence – choosing targets from the earlier ‘pristine’ film-footage gathered by the morally bankrupt world media (excluding the Socialist press – which includes Iran).

Where young and old were previously marching now lies dismembered and charred bodies. Where once the film-footage showed row upon row of animated protestors – the footage now shows a drone’s eye view as they hover over the area to be saturate bombed and record the spectacle for all the far-right ‘shock’ video sites in the US that are administered by numerous neo-Nazi groups, etc. The bodies (and minds) of the indigenous people are manipulated by the Western political establishment as pawns in the game of US foreign policy, and when their bodies are ripped to pieces and the wounded are lying their screaming for help and slowly dying – a ‘new’ and far more ‘grotesque’ form of Western entertainment is initiated for the ‘fun’ of a hate filled and far-right ‘White’ population! Even the signs of protest are written in the most convenient language suitable for their enjoyment purposes! Is this not the height of racist exploitation?