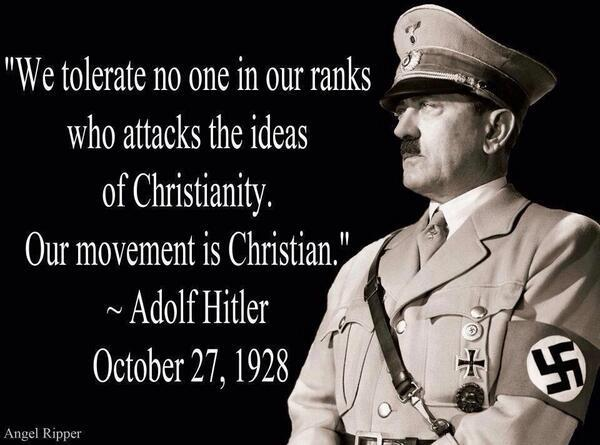 Western (capitalist) propaganda states that Scientific Socialism (as developed by Marx and Engels, and interpreted by Lenin), is ‘atheistic’ and therefore somehow ‘deficient’. This is because so-called Communist countries separate Church from State, and the classroom from the Church, etc. In other words, the average Socialist regime applies exactly the same separation of Church and State as is the norm in the virulently ‘capitalist’ United States of America. This being the case, why is this propaganda employed by the US against Socialist and Communist regimes, when a) the US and most modern, secular States in the (capitalist) West apply exactly the same separation of Church and State, and b) religious freedom is ‘guaranteed’ in all Socialist and Communist regimes? The Catholic Church, of course, with its headquarters in the Vatican in Rome, is steadfastly anti-Socialist and anti-Communist, whilst as an institution it got away with supporting Fascist Italy from 1921, and Nazi Germany from 1933 – until the forces of International Fascism were defeated by the USSR, UK and US, etc, in 1945. Catholic priests, without any sense of irony, then officiated over the executions of the leading fascists and Nazis that they once assisted! Even after 1945, the Catholic Church continued to help Nazi War Criminals escape justice in Europe. Today, the Catholic Church on the popular level continues to churn-out fictitious literature masquerading as ‘biography’, which sees the Catholic Church being a victim of a non-existent Communist plot. Even the plague of child sexual abuse perpetuated by Catholic nuns, monks and priests over recent decades has been blamed not upon the Church’s own inherent criminality and corruption, but rather on an imagined ‘infiltration’ of Marxists and modernists into its ranks. On top of this, there are the Trotskyites with their links to Zionism and freemasonry, who advocate a distorted type of Socialism which supports the Catholic Church’s attack upon Marxist-Leninism and which prefers to collaborate with capitalism, rather than overthrow it!

The US accuses Socialist and Communist regimes of instigating the very same ‘atheism’ practiced by its own Constitution. Of course, this propaganda does go a step further by accusing Socialist regimes of affecting social reformation by rounding-up all the religionists and either committing genocide, or working them to death in Concentration Camps. Again, bourgeois, capitalist society progresses its profit-searching through the use of modern science. Whatever makes or retains wealth for the bourgeoisie is the direction in which modern science is directed. Within Socialist countries modern science is used to make life better for the majority of the people, regardless of the cost of the research, experimentation and finished product manufacture. The US (and its capitalist allies) make use of modern science, as do Socialist regimes. This is yet another parallel, but the angst appears to be around the attitude toward the search for personal profit, as this is ‘banned’ within Socialist and Communist societies, as it is the base-foundation of the exploitation of the masses.

When everything is assessed rationally, people pursuing religion are no freer in the US than in any Socialist country. Religiously minded individuals in the US cannot run for political office as a representative of their religion, but must join an existing (secular) party, where their religious views are presented as being ‘personal’. Exactly the same situation exists say in China, where religious views are seen as entirely a private matter. If what the US idealogues are saying is true, then the Socialist and Communist regimes would ‘outlaw’ religion entirely in their constitutions, but this is not the case. Although young schoolchildren are not to be exposed to religious ideas at a vulnerable age within State-run (Socialist) schools, these children, with the permission of their parents, can learn about religion in through other (religious) institutions. A Socialist State ensures the right for a) a religion to exist, b) for an individual to follow a religion, and c) for individuals to follow no religion if that is their choice. Of course, in the (capitalist) West, the Christian Church merely manoeuvres candidates with strong religious views into positions of (secular) political responsibility and power.

What the Catholic Church resents about Socialist countries is that these kinds of deceptive tactics are considered illegal. The Catholic Church is obviously power-mad for political status in the world and is not happy to exist as a means of spiritual emancipation for the masses to make use of. This is a ‘sickness’ of dishonesty that exists within its ranks. Admittedly, it is mostly perpetuated by priests who live in the world, rather than cloistered monks and nuns, but every so often, even the monastics manage to produce a psychopath in one form or another. This is a delusional cesspit that the popular Catholic Church has dug for itself. There is no need for Marxists or modernists to infiltrate a thoroughly corrupt structure that is already near to collapse due to its own destructive behaviour. Catholic literature routinely attempts to brainwash the masses by continuously referring to Marxist, Socialists and Communists as being ‘evil’, ‘of the devil’ and the ‘true enemies of the Church’. Although this literature does not extend much beyond the bigoted Catholic community that produces it, it still represents a significant development that has the potential to inspire Christian terrorists to attack and hurt those considered ‘evil’ enemies of the Church. Five hundred years ago, it was old ladies and black cats, but today it is young people with red flags calling for ‘equality’ and ‘justice’! The Catholic Church needs a wave of honesty to sweep through its ranks and those responsible for very real crimes must stand trial and face the ‘legal’ consequences for its many crimes!