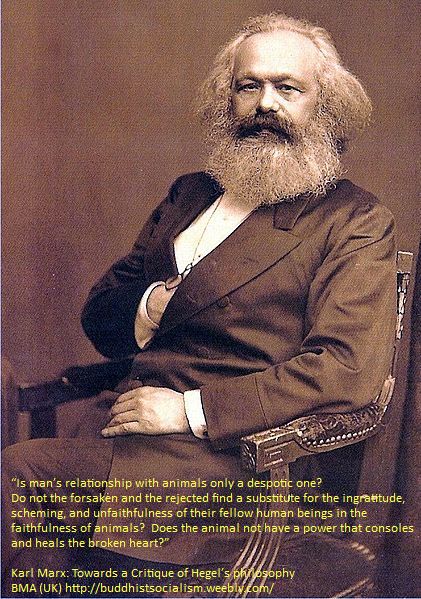 I do not mean that animal rights should ONLY possess a Marxist-Leninist foundation, but that Marxist-Leninists should recognize the validity of this movement and acknowledge that animals have suffered terribly under predatory capitalism. The liberation of human beings from capitalist oppression should be clearly extended to include animals, with an emphatic rejection of ALL religious attitudes that portray animals as inferior beings lacking souls and to be slaughter in various (and hideous) ways. Of course, no one or no creature possesses a soul in the religious sense, but this false dichotomy as found in the Judeo-Christian tradition separates humans (with souls), from animals (without souls). Animals are presented as play things for humanity placed on the Earth by a mythological god. Marxist-Leninists support the Buddha in that he proclaimed there is no such thing as a soul (or ‘atman’), and that life is the product of the interaction of bundles of biological processes, with consciousness being the product of a special arrangement of matter. Brutalizing animals for their flesh, fur, teeth and paws, etc., is barbaric and akin to the attitude that justifies war between human groupings. Marxist-Leninists must embrace animal rights on the grounds that just as many rightists supports this movement as do leftists, and this ground must be taken away from the far-right a priori. Some animal rights groups are thoroughly rightwing in nature and use the sentiment associated with protecting animals with recruiting members to simultaneously embrace anti-Semitism, Islamophobia and all other types of racism and discrimination. China is a prime example of being the victims of rightwing animal rights movements, where racial stereotypes are used to convey anti-China racism in the guise of caring for animals. In reality, however, Communist China is progressing in leaps and bounds with environmental protection and animal rights as Socialist ideas are formulated and applied. In the meantime, the very same rightwing animal rights groups say nothing about Native Americans or people in Switzerland and Belgium eating dog-meat. Rightwing animal rights groups are often Trotskyite in nature, neo-Nazi in intent, and thoroughly supportive of predatory capitalism in practice. As Marxist-Leninists we do not need to eat meat, and we certainly do not need to encourage the industrialized farming found within modern capitalism. Being vegetarian or vegan is a Revolutionary act that possesses the power to severely dent the profit margins of commercial farmers.