Briefly stated, the Dunning-Kruger Effect is a statistical observation made by two US academics (in 1999), that generally speaking, states that individual human-beings are a) ‘unaware’ of b) what they ‘do not know’, or c) what they ‘do know’. This statistical operation has been extrapolated into 1) individuals being unaware of their lack of knowledge, and 2) individuals being unaware of the extent of the knowledge they possess. In the case of 1), lack of knowledge is assumed to be accompanied by an over-inflated sense of ability, whilst in the case of 2), the obvious presence of genuine knowledge is not understood as such (often manifesting as an over-inflated sense of ‘modesty’).  Therefore, the Dunning-Kruger Effect applies equally to the ignorant as it does to the knowledgable in principle, with the caveat that supposedly ignorant people are more numerous. 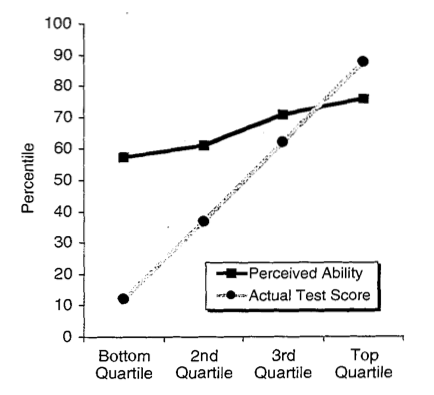 Dunning and Kruger tested ‘perceived ability’ and ‘actual ability’ and correlated the differences between the two results. Although in popular thought it is believed that incompetent people think they are ‘cleverer’ than competent people, this simply is not the case as evidenced by the Dunning-Kruger Effect. People who score high think they are more competent than those in the quartile immediately below them.  Those who have lower scores do not think they are better than those who score higher, but rather they often think that they possess an ability beyond that which they actually do. What is required to become ‘aware’ of this discrepancy in human awareness is the development of a meta-cognitve ability – presumably acquired through education and training. This structured education provides a psychological framework through which an all-round perceptual ability maybe developed, so that areas of lack of understanding can be identified and remedied, and already existing areas of expertise can be brought into conscious awareness and employed much more efficiently.

My own opinion is that I remain unconvinced by the Dunning-Kruger Effect as being a great discovering in psychology, and believe it to be a mis-observation of statistics, in the sense that it does not convey the entire phenomenon under investigation. Yes, people of varying educational levels can remain ‘unaware’ of the knowledge they either possess or do not possess, and yes, through education and special training, people can become aware of what they were previously unaware of – so what? Is this not the age-old and universal quandary of education and virtually all philosophical systems? At no point do Dunning and Kruger take into account ‘class’, or the unequal distribution of (educational) resources throughout capitalist society. As a consequence, their research is purely ‘bourgeois’ in nature, and representative of that privileged class. On the other hand, I do understand and accept that the Dunning-Kruger Effect has been hijacked by the rightwing and used as a means to defend the ignorance of neo-Nazism and fascistic thinking. From what I have seen, this stems from the Alternative Right in the US, which has replaced black or brown shirts and swastikas with white shirt and ties – pretending to be ‘mainstream’ and ‘acceptable’ to ordinary people. As the far-right possesses only Hitler’s Mein Kampf as a basic text, it has desperately searched for some kind of ‘intellectual’ theory to justify its prejudice and violence.

As the far-right believes that any and all non-Whites are intellectually deficient and unable to ‘comprehend’ or ‘understand’ either basic or advanced intellectual arguments, the Dunning-Kruger Effect is misused in a rhetorical sense to make this attitude clear for all to observe. What does this mean in practice? If a Black or Asian person (or their White allies) voice ‘disagreement’ with the racism and prejudice they are subjected to, then the distorted Dunning-Kruger Effect is wheeled-out to ‘prove’ that these deficient individuals are so stupid that they do not perceive their own racial inferiority, whilst simultaneously assuming to possess some ‘higher’ knowledge which exposes and transcends the Eurocentric ignorance aimed at them. When anti-racists make clear the fallacy of the racist arguments deployed against them, the far-right then accuse their victims of employing ‘confirmation bias’. This approach suggests that the only way forward for non-Whites is to stop confronting White racism and continue to exist within the parameters of a society defined by White Racism. This attitude keeps the victims of racism in a subordinate position and unable to resist or fight back. However, this has no bearing on the real Dunning-Kruger Effect which simply states that none of us are aware of that which we remain unaware of. It is ironic that the Alt Right, far-right and neo-Nazis that misuse the Dunning-Kruger Effect in this way, are also proving its basic premise that they a) remain unaware of their lack of genuine knowledge, and b) believe that they are ‘superior’. Dunning and Kruger designed their work to be relevant to the individual, and never envisioned it to be used across society by one group targeting another.