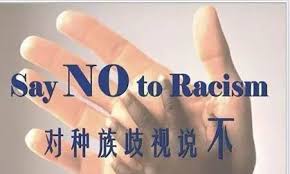 It is not a country or nation state that is racist, but rather a privileged class of people.  This class is the international bourgeoisie which is dominant throughout most countries in the world.  Countries are racist not because they are geographical entities, but because they are run by a class that continuously perpetuates the ideology of racism as part of its strategy to prevent the international working class from realising its predicament, and effectively uniting to do something about it.  Therefore racism is a false consciousness that destroys working class hegemony, and renders each working class person into the disempowered state of isolated individual.  As the international working class is composed of many different and distinct ethnicities, religious groups and cultural identities, the dominant bourgeoisie utilises racism as a means to create a false division in the minds of the workers, and to encourage those workers to exist in a constant state of antagonism and aggression toward one another.  If the workers are busy fighting amongst themselves because of the racism imported into their mind-set by the bourgeois media and education system, then they will be unable to cognise their true situation and realise that they in fact exist in a state of permanent subjugation at the hands of the bourgeoisie.  The function of racism is to prevent insight into the real nature of reality, and it has been justified by the bourgeoisie as a ‘science’ that supposedly links the apparent differences in physicality with differences in genetic structure, etc, which assumes (falsely) that skin-colour ascribes ‘superiority’ or ‘inferiority’ to an ethnic group.  This is not science, but mythology in the service of bourgeois privilege and its maintenance.

The international bourgeoisie developed historically in the West and has evolved to represent white, European power and privilege throughout the world.  The bourgeois dominance of different societies was spread from Europe into Africa, Asia and the Americas through the agency of empire, imperialism and colonisation.  This project saw the European bourgiesie extend its influence beyond the oppression of the European working class and into other areas of the world.  This seizing of political power in other countries was accomplished through the use of military force and the demonization of non-European cultures through the use of Western Christianity.  The bourgeoisie continued to oppress the European working class through political and cultural domination, but formulated the ideology of racism as a means to dominate the non-European peoples of other countries (many of whom had not yet formed a ‘working class’).  This ideology was then educated into the minds of the European working class by the bourgeois education system, and served as the primary means of interaction between Europeans and non-Europeans.  Although working class people were oppressed by the bourgeoisie, the new lie was that at least they were ‘white’ and therefore racially superior to the ‘non-white’ peoples of the world.  This developed from the bourgeoisie encountering different peoples who possessed differing complexions, and it was this apparent ‘difference’ in skin-colour that the bourgeoisie focused upon as the main distinguishing factor when dealing with other cultures, so much so, in fact, that a highly aggressive and destructive pseudo-science developed around it.

When the European bourgeoisie oppressed the European working class, skin-colour was not an issue as both classes were of the same ethnicity, and shared a common culture.  The development of racism is solely a bourgeois class interest and nothing more, but it has been made to infect the minds of the working class who have absolutely nothing to gain from it, as it prevents their uniting in such a manner that can challenge (and over-throw) the dominant bourgeoisie.  However, it must also be understood that ideological racism is a white, European invention that has been spread throughout the world through European imperialism, and that as an ideology, it only serves to empower white people (albeit of the middle class variety).  White working class people who are racist, do not gain any political or economic power from mimicking the bourgeoisie, but are so poorly educated they do not understand this reality.  In the meantime they continue to do the bourgeoisie’s dirty work (in the form of violence, rape and murder), by blaming anyone who is not ‘white’ for the problems the working class suffer at the hands of the bourgeoisie.  This is the essence of false consciousness, and a prime ingredient in the continuation of the maintenance of bourgeois hegemony.  Bourgeois racism can be defined as ‘prejudice’ manifest through economic and political power.  This means that no matter what ignorant white people think about ‘disempowerment’, white people as an ethnic group, possess all the power within European society, despite the fact that the white working class is oppressed by the white bourgeoisie.  As the historical roots of racism is white and European, it logically follows that racism serves the economic (and political) purposes of the white, European bourgeoisie, and that non-white people cannot be ‘racist’ because they are not ‘white’ or ‘European’.  Non-white people – being as they are – victims of historical European domination and oppression, can import European negative attitudes into their minds about other non-white peoples, but this does not mean that they are being ‘racist’ if they give vent to these views.  Black and Asian people in the West do not possess any significant collective economic or political power, and so are unable to make their viewpoints work to their advantage in a system that a priori favours ‘whiteness’ over any other cultural grouping, and this is the case even if non-white people express discriminatory views about white people.  White people cannot be the victims of a racism they invented, whilst living in a society which they fully control and manipulate to their collective benefit.

This observation counters the current trend in white society of the apparent ‘equality’ of racism, which falsely asserts that white people are victims of ‘racist’ crimes.  This is untrue and ‘ahistorical’.  In fact such an allegation is the continuation and development of the bourgeoisie’s ideology of racism under the new conditions of multiculturalism.  This is the maintenance of ‘white privilege’ which seeks to hide and deny the historical presence and existential functioning of white racism within European society.  So powerful is the bourgeois instinct to dominate at the point of contact, that even the ‘victim’ status of those non-white people who suffer under white tyranny, must be took off of them and rendered null and void.  This is because Eurocentric racism assumes that only ‘white’ suffering matters, and the suffering of non-white people is of a lesser order (because they are deemed racially ‘inferior’ and not able to perceive the world as white people do).  When white commenters state that racism is natural because all ethnic groups practice it, they are wrong.  European racism only exists in other non-European groups, because European imperialists placed it there!  When non-white ethnic groups in the West are seen to attack one another, they are not being ‘racist’ but rather ‘prejudicial’, and only then because they are living under the oppression of the white bourgeoisie.  Just as it is not in the class interests of the white working class to be racist, it is equally not in the class interests of the non-white working class.  It is bourgeoisie racism that separates the world into ‘white’ and ‘non-white’ and it is exactly this ideology that must be over-thrown through the development of non-inverted knowledge and insight by the constituent members of the international working class.