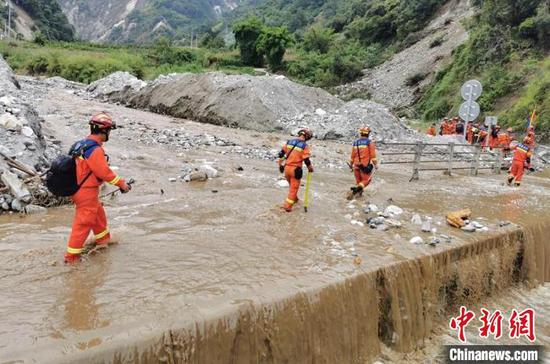 (ECNS) — The death toll from a magnitude 6.8 earthquake that hit Luding County in southwest China’s Sichuan Province on Monday has risen to 88, local authorities for earthquake rescue and relief said Friday.

In the above photograph Firefighters head for Xingfu village in Shimian County of Ya’an, Sichuan, for rescue operations, September. 6, 2022. (Photo/China News Service)

Among the dead, 50 were killed in Luding County in the Ganzi Tibetan Autonomous Prefecture, and the other 38 were in Shimian County of Ya’an.

Another 30 people are still missing and 400 were injured in this quake.

NOTE: A ‘natural’ anti-China racism runs-through the centre of and all Western discourse surrounding any discussion regarding China – and has ensured that although China’s Search and Rescue Services are provided ‘free of charge’ to any location in need around the world (and are always on the front-line of any disaster situation) – seldom is this altruistic attitude of ‘caring’ reciprocated (or applied) to Chinese citizens! In this case, many of the those Chinese citizens happen to be of ‘Tibetan’ ethnicity – an inconvenient fact the Western governments involved with the criminal 14th Dalai Lama Clique do not want their respective populations knowing about! Over a thousand years ago, tens of thousands of warlike Tibetans left their traditional regions to the Northwest of China and invaded the Southwest of China before settling into these newly conquered areas! This explains why millions of Tibetans are born in (and live very happy lives) in Southwest China – a process of Tibetan migration and colonisation that has ensured the permanent political and cultural cementing together of the Northwest and Southwest regions of China!