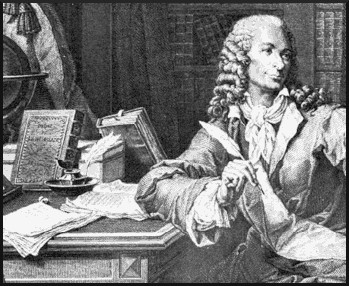 Quite often, particularly within US discourse (seeking to justify and defend various elements of that country’s dalliance with anti-intellectualism), the French philosopher – Voltaire – is given as saying:

‘I disagree with what you have to say, but I will defend to the death your write to say it!’

Or, variants of. In reality it is doubtful that Voltaire would have lent his name to such an illogical statement of philosophy in the name of cheap rhetoric or vulgar tautology. This sentence is often repeated with a tremendous force of indignant self-righteousness which gives it a false air respectability and high morality – when in reality it is the very definition of stupidity and false thinking. Indeed, it was not Voltaire who said this but one of his British biographers, namely – Beatrice Evelyn Hall (writing as ‘S. G. Tallentyre’) – in her 1906 book entitled ‘Friends of Voltaire’. There is much debate in this area about whether Voltaire wrote something very similar in a 1770 letter to a friend (within which Voltaire appears to support ‘freedom of literature’ rather than ‘freedom of speech’) – with the weight of evidence being toward the negative. Readers can research this fascinating debate on the internet. However, I which to critique and expose the stupidity of the line:

‘I disagree with what you have to say, but I will defend to the death your write to say it!’

This statement appears to have been written to justify the American notion of ‘free speech’ which raises ‘wisdom’ and ‘stupidity’ to the same level of worth (as if each must be given and ‘equal’ weight of meaning). This is a law that removes the required ‘responsibility of speech’ which has informed all great cultures – and replaces it with an ‘equality’ between ‘genuine knowledge’ and the false thinking associated with ‘anti-science’, etc. This stark dichotomy can be clearly seen with the election of Donald Trump and the utter stupidity with which the US has confronted the Covid10 pandemic. Why is the above statement ‘wrong’? If a person were to say to me that he wanted to kill me, my family, my community and my ethnicity – in other word, commit genocide against a ‘race’ – my ideal attitude should be one of accommodation and active ‘support’ for this destructive stupidity! Yes – according to the anti-logic of the above statement – I would have to align myself with the forces of fascism to make a point about myself being ‘tolerant’ toward viewpoints held by other individuals who seek to destroy my physical presence in the world! Really? This would mean that instead of taking-up arms to defend myself, my family, my community and my ethnicity against this fascist stupidity – I would have to take-up arms against my own kind who are already fighting this fascism in the name of their own survival!  The sheer ‘anti-intellectualism’ of this statement suggests that ‘I’ – as the target of ‘oppression’ – should be prepared to ‘support’ the forces of oppression being applied to myself (and people like me) in order to ‘prove’ that ‘I’ am ‘tolerant’ with regard to the viewpoints of others!

As breath-taking as this stupidity is, the reality is that a person who expresses such a dangerous rhetoric should be immediately disarmed and taken out of circulation by judicious means, and not ‘indulged’ with a pseudo-tolerance that is constructed to support the excesses of the far-right and the right-wing. Who – in their right mind – would subscribe to the stupidity inherent in the above statement? Americans, obviously, because this statement sums-up exactly the ‘anti-intellectualism’ that underlies the ‘freedom of speech’ legislation that defines their culture and reduces their ability to think clearly. The above statement is a blue-print for the support of fascism, toleration and bigotry and it should be purged from usage within the English language! Fascism is an ideology of deficient thinking and stupidity that is armed with all the terror weapons that science can construct! Humanity must reject the American experiment as a ‘failure’ and consign the notion of ‘freedom of speech’ to the dustbin of humanity. Humanity has a duty to confront, fight and defeat all the powers of fascism whilst acknowledging that a great support for this fascism in the modern era is the United States of America!