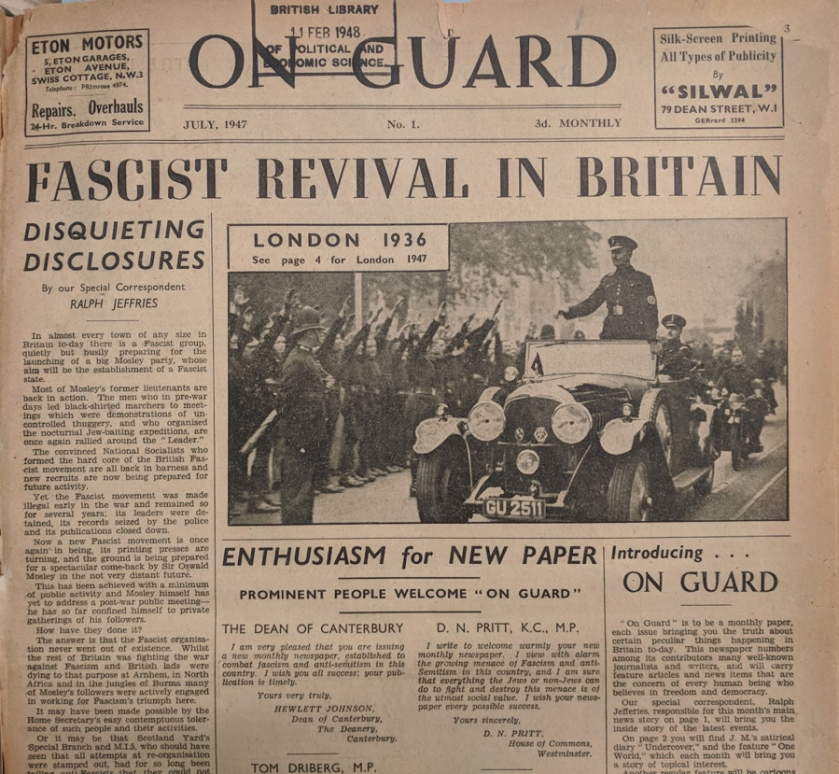 Author’s Note: One of the best books you will ever read on this subject! Winston Churchill, the Royal British Legion and the Conservative Party were amongst those individuals and groups which placed their names on ‘lists’ in Nazi Germany ‘requesting’ regular updates by post – of the developments in the ‘Fatherland’ from 1933-1939! With the British royal family publicly engaging and endorsing Hitler – it is no wonder that so many ordinary British people (no doubt suffering from a ‘false consciousness’) felt compelled (or at least ‘curious’) to investigate further the fascist (and ‘anti-Communist’) ideology of Adolf Hitler and his peculiarly named ‘National Socialism’. The true extent of fascist support in the UK has been expunged from mainstream British as it is ‘inconvenient’ to the British self-righteous narrative that emerged out of its victory in WWII. It is very difficult to convince the world that ‘Britain stood alone’ against fascism – when a substantial number of its citizens held openly racists views and were actively drawn toward the ideology of Nazism! Indeed, Soviet spies more or less living in the UK as ‘guests’ during WWII – reported to the Kremlin that should Nazi Forces ever land on the English coast in-strength – it would be highly likely that a large percentage of the population would ‘support’ the invasion and refuse to fight!  Today, the younger generations receive a idealised version of history that falsely paints the UK as being staunchly ‘anti-fascist’ (a myth that persists even on the political left) – when racist views were just as common then as they are today – if the only difference being that the UK government is now openly ‘supporting’ the neo-Nazi regimes of Eastern Europe! A Jew fleeing persecution in Europe stated that he ‘Preferred British Concentration Camps to those he’d experienced in Germany…’ ACW (31.12.2020)

The (right-wing) Royal British Legion was founded in 1921 as a means to divert the attention of returning British military Veterans from WWI (1914-1918) and the Western invasion of Revolutionary Russia (1918-1921). The Royal British Legion has the support of the royal family, the British government and the British establishment as it is inherently ‘anti-Socialist’ in both structure and purpose. Today, despite raising millions of pounds annually through the sentimental ‘selling’ of poppies – the Royal British Legion does ‘nothing’ to financially or material assist British military Veterans who find themselves in various incidents of distress. The (Protestant) Church of England also supported this ‘anti-Socialist’ position – stating that there as a ‘certain harmony’ between fascist ideology and Christian theology. In effect, the CofE followed exactly the same support for fascism as exhibited by the Roman Catholic Church. This all coincided with the rise of fascism under Mussolini in Italy (during 1921), which offered an ideological focus point for the Bourgeois State and its anti-Socialist trajectory.

The British movement of fascism in the early 1920s received widespread support from the aristocracy as well as the middle-class, and was used to turn-away the British working-class from drawing inspiration from the Marxist-Leninist inspired Russian October Revolution in 1917! Many working-class men serving in the Trenches of WWI were aware that their Russian allies took their Czarist Officers prisoner (in 1917) and laid-down their arms in the name of the Czar – and picked them up again in the name of VI Lenin, the Red Army and the Soviet State! Many of these Russian soldiers serving in France were arbitrarily arrested, placed in a make-shift prison camp (at ‘Courtine’) – whilst British and French artillery was ordered to bomb the enclosure and ‘kill’ as many of these ‘mutinying’ Reds as possible! The British government did not want hundreds of thousands of returning working-class men to Britain who were a) militarily trained, and b) battle-hardened – joining ‘Socialist’ groups, ‘political parties’ and associations which could make use of this training to perpetuate a Socialist Revolution in sympathy with the Russians!

An irony of WWI – and the Royal British Legon’s mishandling of the poppy appeal each year – is that between March and November 1918 – British and German troops fought together in Revolutionary Russia pursuing the common aim of ‘killing Lenin’ and ‘destroying’ the fledgling Bolshevik System! The Germans left this conflict with their defeat on the Western Front on November 11th, 1918 – but their presence in Western Ukraine had already planted the strong seeds of pro-German nationalism that would lead to the death of millions during WWII! Mussolini had very good diplomatic relations with Britain between 1921-1933 – when Adolf Hitler was brought to power in Nazi Germany. Indeed, prior to Hitler’s ascendency it was Mussolini who exported fascism to the UK and financed many of the British movements. Even Oswald Moseley’s British Union of Fascists (BUF) received funding in this matter before switching to Hitler. However, following Moseley’s Blackshirts being defeated by the massed (Socialist) British working-class at the 1936 Battle of Cable Street in London – relationships soared. With Winston Church writing that Hitler was a ‘great man’ in 1936, and the British royal family expressing a liking for Hitler – or photographed performing ‘Hitler Salutes’ – the message was being sent that the British establishment favoured fascism over Socialism.

The proliferation of fascist ideals and positive opinions throughout the British press left many British people of all classes impressed with fascism and disdaining of Socialism. By the time war had broken-out between Hitler and the UK in 1939 – a fertile psychological and physical environment had been created for the British support of a) fascism in general, and b) German Nazism in particular. This is why the Nazi Germans were able to recruit, maintain and strengthen an extensive network of pro-German ‘spies’ – many of which were expendable and of a low value due to their lack of training or experience. However, what these British spies possessed the mindless enthusiasm of the British State which had brain-washed them for decades to hate the only ideology that could save them – i.e. ‘Socialism’ – and turn to fascism – the ideology that opposed each and every one of their class interests! These British spies quite often were isolated working-class individuals lost in a world of bourgeois lies and deceit. Many of them were married, poor and out of work. They would often make contact with the Nazi Germans through adverts in local newspapers, phone-boxes and word of mouth. Occasionally, chance meetings would establishment contact with the Nazi German Intelligence Services.

Communication was through the post and via the telephone – with payments ranging from £5, £10, £20 and £100 changing hands – up such high amounts as £800 depending upon the value of the data being transferred. This cash often arrived in a sealed envelope – although the British MI5 (B Branch) and MI6 were often seen intercepting and opening this type of suspicious post – before resealing and allowing it to be delivered, etc. Spies generally had to be watched over long periods of time – as the Nazi Germans were very careful not to expose or endanger their most valuable German assets operating in the UK. British spies were considered ‘amateurs’ seeking to make a quick bit of money and not get caught by their own side. These were very different to the professional ethnic German spies and spy-masters who were present in the UK – often under deep cover and very difficult to detect and observe. This is not to say that the British ‘volunteers’ were not sincere in their efforts to support Nazi Germany – as written evidence suggests that after nearly two-decades of establishment brain-washing – their letters clearly demonstrate that they now believed that fascism was by far superior not only to Socialism, but also to democracy!

MI5 quickly found, arrested and imprisoned the many hundreds of men and women who openly expressed pro-fascist views and tried to betray their country in the service of Adolf Hitler. The problem was as far-spread as it was embarrassing for the British State which had eventually decided to oppose Hitler and side with the USSR! Although probably about two-thirds of the ethnic German spies who were discovered were tried and executed – most of their British counter-parts were even imprisoned in jail, or placed in detention camps. What can be seen here, is the intended result of a British pro-fascist policy that was begun in 1921 – and which achieved its objective of converting a small but substantial cross-section of British society to supporting the ideology of fascism. This demonstrates that a) people should think Socialism is ‘wrong’, and b) that fascism is ‘right’! By the time war became inevitable with Hitler and his allies – a substantial cross-section of British society had been conditioned to think that Hitlerism was preferable to anything left-wing. Britain’s alliance with the ‘Communist’ Soviet Union only added fuel to this ideological fire! British learned very quickly to ‘internalise’ their natural right-wing sympathies and simply not express such ideas outside of the company of a select few.

The UK, through its empire, had propagated racist ideas amongst its White population for hundreds of years aimed toward Africans, Chinese and Indian, etc, all of whom had been represented as ‘sub-human’ as well as politically and culturally backward. What Hitler had to say about the world outside of Western Europe often struck a chord with many ordinary British people – although his emphasis upon the Jews was a little out of context for the UK. If anything, the British establishment had been cooperating with the forces of international Zionism for decades, and had devised a plan to annex Palestine as a means to create a Jewish State as far back as 1917. Even after the collapse of the USSR in 1991, the West has yet again been encouraging a resurgence of neo-Nazism throughout Eastern Europe as a means of expanding the EU (and US influence) further Eastward up to the borders of Russia! This is why the US, Hungary, Poland and the Ukraine continuously vote against a Russian Resolution at the UN designed to ‘condemn the glorification of neo-Nazism’ (whilst the UK and EU countries ‘Abstain’) – on the grounds that such an idea would render the US, UK and EU policy of instigating neo-Nazi takeovers throughout Eastern Europe as ‘illegal’, not to mention ‘immoral’! The ‘Black’ US President Obama initiated the (illegal) neo-Nazi (Maidan) take-over of Western Ukraine in 2014! This policy of supporting fascism and neo-Nazism by countries that once fought against it proves how fickle and shallow the politics of capitalism actually is.