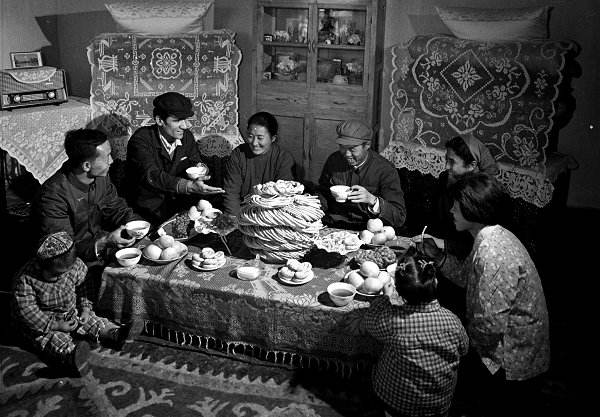 Technically speaking – the US (and ‘official’) spelling of this title is ‘Xinjiang Education and Training Center Task Force’ – but just as I ‘reject’ US imperialism and US predatory capitalism, I equally reject the deficient standard of the so-called ‘American English’. This outpouring of anti-intellectual cultural developed (initiated by the violent ‘breaking away’ from the ancient British culture and the English language), is typical of the crass nature of the bourgeoisie. The United States is built upon genocide, greed and expansionism – and there is nothing special about this middle-class aberration built upon the institutional enslavement of the African people and the virtual slave-labour of the Chinese migrants. The concept of ‘freedom’ for the average American is the a) freedom to exploit others without limit, and b) freedom from the responsibility of caring about – or ensuring the welfare others in their society.  Racism is the glue that holds this mish-mash of cultural markers together. By racism, I of course mean ‘White’ dominance and ‘White Superiority’. Perhaps this is linked to the very strong sense of racial identity found within Germanic civilisation – and it should come as no surprise to see the similarities between the US System (magnified by the fascism of Trump) and the National Socialism of Hitlerite Germany! In-short, the United States of America is a master ‘racism’ and ‘racist’ rhetoric.

This is an important observation, as it describes the basic policy the US deploys against the People’s Republic of China. The main point of this policy is to constantly demean and cajole China so as to remind it of its subordinate ‘racial’ categorisation, and reduce to a third-rate developing country that should not dare to challenge the racial supremacy of the White race in the US! To achieve this objective, the US must propagate narratives that continuously portray the Chinese people as ‘racially ‘inferior – ad unable to ‘think’, or ‘act’ beyond this status of biologically decreed ‘inferiority’. This racist message is clear – China’s deficient ‘Socialist’ System does not contain the inherent ability to out-perform the supposedly ‘White’ ideology of predatory capitalism. There is a twist, of course, as the racist waters seldom flow smoothly. The racism the ‘White’ Americans perpetuate is viewed by them as both ‘natural’ and ‘inevitable’. This is part of the bulwark of far-right political thinking. Those who adhere to the ideology of fascism believe that the activity of anti-racism is ‘wrong’ because – as Hitler asserts in his Mein Kampf – ‘racism is natural and should not be suppressed’. The icing on this right-wing cake is that White racism toward China – the US racists inform us – is correct because the Chinese people ‘are just as racist as we are’.

What this false narrative is designed to justify is the fake assertions made by the pseudo-scholar Adrian Zenz – aka ‘Zheng Gouen’. He ‘hides’ his anti-China racism in plain view. As a born-again-Christian – he joins the Vatican in viewing the Marxist-Leninist (Maoist) State as being ‘Atheistic’ and ‘anti-religious’. In fact – like the USA – modern China separates Church from State. Modern China – like the USA – also guarantees in law the right to follow any lawful religion or subscribe to any lawful belief system. Modern China – like the USA – also recognises ‘Atheism’ as a legitimate belief system. Although during WWII the USA imprisoned its own Japanese-American citizens in Concentration camps (whilst ‘White’ ethnic German-Americans were allowed to walk freely around dressed as ‘Nazis’ advocating Hitlerite ideology).

Modern China has never done this to any of its 56 ethnic groups – all of which are equal under the law – a point of law which also includes the two Chinese ethnic groups of the Uyghur (Turkic) and Hui (Arab) – both which practice the religion of Islam. Most people who fall for the anti-Islamic rhetoric of Adrian Zenz often have no knowledge of the Hui Chinese-Muslims who – like the Uyghur – also live peaceful and productive lives in China under the Socialist System. When asked by a Chinese academic ‘why’ it was that he thought the Chinese State ‘oppressed’ the Islamic Uyghur whilst apparently not following this allegedly ‘racist’ policy against the Islamic Hui – Adrian Zenz looked surprised, stunned and totally confused before a US Intelligence Agent quickly whisked him away from the TV cameras which filmed the event. Of course, the Xinjiang Education and Training Centre Task Force – as a harbinger of racist disinformation – has no answers to questions that like this that completely ‘expose’ its deficient and dishonest ‘functionality’. And herein lies the illogicality and inconsistency of the US ‘racialised’ attack upon China. As for attacks upon religion – look no further than the US government attack upon the Christian community at Waco in 1993 under President Clinton. The Chinese State preserves and respects the rights of its citizens to be self-determining within the progressive Socialist System.