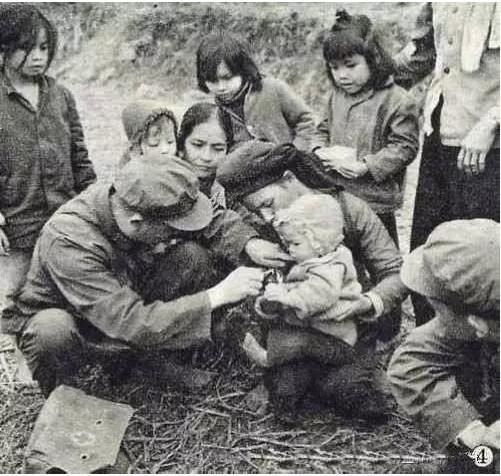 The 100,000-strong Army of Socialist Vietnam entered Democratic Kampuchea on the 25th of December, 1978, supported by the USSR (and the US) – the Vietnamese would not leave ‘Cambodia’ until the 26th of September, 1989.. The point of this action was to dislodge the Khmer Rouge as this regime was thought to represent the expansion of Chinese Communism outside of Mainland China. This must be viewed within the context of the Sino-Soviet Split (which began in 1956) with Khrushchev’s ‘Secret Speech’ demonising the reputation of Joseph Stalin (aligning the Soviet view of Stalin with that of post-1945 America). Mao Zedong and the Communist Party of China rejected this ‘revisionist’ view, and ideologically moved ever further away from the Soviet position (which was considered ‘reactionary’ and ‘counter-Revolutionary’). By definition this suggested that Communist China now represented the ‘true’ path of Marxist-Leninism and had taken the place of the USSR as the leader of the World Socialist Movement. Under Ho Chi Minh, Socialist Vietnam pursued a path of moderation and treating both sides with respect – with Ho Chi Minh enshrining ‘Mao Zedong Thought’ as part of the guiding Constitution of Socialist Vietnam. Following Ho Chi Minh’s death in 1969, ‘Li Sun’ (黎笋) came to power in North Vietnam and eventually aligned a united Socialist Vietnam with the USSR (removing ‘Mao Zedong Thought’ from the Constitution). This led to tremenndous ideological tension between Vietnam and China, with Vietnam adopting the anti-Chinese ideology of the USSR and the US. Despite the tremendous suffering inflicted upon the Vietnamese people by the US, from 1973 onward the US and Socialist Vietnam began to co-ordinate their anti-China policies. The Khmer Rouge was viewed as being ‘Chinese’ in essence (despite its own statements of ‘non-alignment’ and various theories of CIA infiltration). This led to the Vietnamese invasion and destruction of Democratic Kampuchea in 1978 and the establishment of the Vietnamese colony termed the ‘People’s Republic of Kampuchea’ (1979-1989). As this Vietnamese aggression was unfolding, Communist China came to the military aid of the Khmer Rouge with its three-pronged invasion of North Vietnam during February, 1979. As the war unfolded, the PLA invaded and occupied a number of major cities within North Vietnam, and retained control of large geographical areas. The Vietnamese fought back with militia Units and Regular Army Units, but suffered terrible casualties. Whereas the English Wikipedia page upon this subject continues its anti-China policy of disinformation (a subtle blend of racism and ignorance), the reality was that elite Vietnamese Army Units had to be withdrawn from Kampuchea to meet this PLA threat – which gave the Khmer Rouge Forces a much needed breathing space. As the PLA withdrew, it pursued a ‘scorched earth’ policy of destroying the infrastructure of North Vietnam. The PLA fielded around 200,000 frontline troops and suffered around 27,000 dead and wounded, whilst the Vietnamese fielded 100,000 Regular and 150,000 Militia troops, which suffered combined casualties of around 90,000 (dead and wounded). Despite a continued PLA presence on this sensative border area, the Khmer Rouge was eventualy defeated and Vietnam took control of Cambodia for 10 years! A little discussed background aspect of this situation involves the continued ill-treatment of Chinese-Vietnamese born and living in Vietnam at the hands of ethnic Vietnamese following the overt anti-China policies pursued by Li Sun.