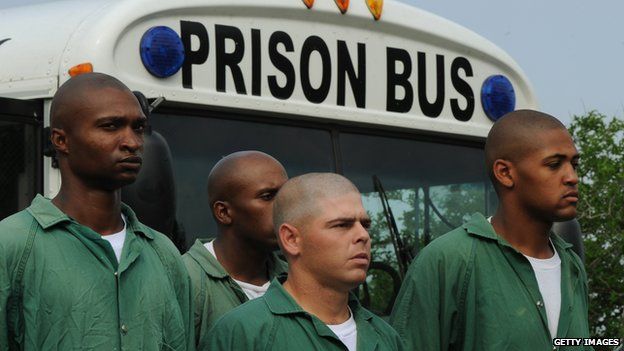 South Africa (the US imprisons twice as many)

Iran (the US imprisons three times as many)

China (the US imprisons six times as many),

(In Europe, that other ‘capitalist’ utopia that is the United Kingdom – imprisons more people than China, Turkey and India, and any other country in Europe – this amounts to 148 prisoners per 100,000 head of population.)

In fact 1% of all American citizens are in prison (this amounts to around 2.3 million people at anyone time).  This is significant because the US government uses its prison population as an unpaid labour force.  This is illegal even in US law, as well as international law, but as convicted inmates have their freedom confiscated by the State, and removed from living in civil society, the US Authorities enforce draconian rules and regulations (hidden behind a thin veneer of rehabilitation rhetoric) that allow for a total and complete exploitation of these people.  This amounts to a US instigated system of modern slavery.  In the US, there are more 17 year old Black males in prison than in college (over-all 1 in 9 Black males between the ages of 20-34).  Whereas only 5% of the world’s population is American, 25% of the world’s prison population resides in American prisons.  Whereas the US hypocritically bans any goods imported into America assumed to have made in prison camps (as contraband), the US prison population is employed in slave-labour conditions making goods for use within the US (including its military that uses these goods when killing people outside the US).  Slave-labour produced goods in the US prison system include 100% of:

Other items of military uniform

93% of all domestically produced paints

All this means that predominantly ‘poor’ Black, Minorities and White working class men and women are exploited within a ruthless and unregulated capitalist prison system, hidden from plain view of the general public.  This is the ultimate in predatory capitalism and free market economics, unencumbered from the shackle of liberal democracy (that fallacy of choice that holds broader US society together).  In short, the prison population not only has its civil rights ‘suspended’ for the duration of its respective sentences, but also cannot ‘vote’ in any election to change the system it exists within.  As the US prison system is run by private firms and corporations, its purpose is to make money, and not positively ‘reform’ inmates, or help the inmates in anyway.  The inmates exist as fuel for an uncaring system of brutal profiteering.  This situation demonstrates an intensification of the ethos of capitalist exploitation and the judicially enforced use of a disempowered group of individuals as a means to produce a near 100% profit margin for the middle class that runs the US prison system.  Of course, despite the US Cold War rhetoric that the USSR and China used prison camps to make cheap goods, Western academia confirms that not only is this not true (and was never true), but is in fact the United States of America that has the biggest Gulag-system in the world today, and has done so throughout modern history.