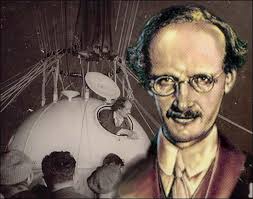 This man was a genius and a personal friend of Albert Einstein.  A long time before either the Soviets or the Americans put human beings in space – the Swiss-born scientist Auguste Piccard was the foremost explorer and gatherer of data from the earth’s upper atmosphere.  He designed metal bells that were attached to large hot-air balloons, and which took him an incredible ten miles up into the sky in 1931 – a distance that no other human being had travelled at the time, and much higher than the aeroplanes of that time could reach.  He achieved this mission with Paul Kipfer after took off from Augsburg, in Germany.  They reached a record altitude of 15,781 m (51,775 ft). During this flight, Piccard was able to gather substantial data on the upper atmosphere, as well as measure cosmic rays. It was this incredible risk-taking and ingenuity that became the basis of all advanced air and space travel that came later.  His missions into the stratosphere were unpredictable and often dangerous as purpose-built equipment broke or did not work in the manner intended.  Later in his life, he also designed submarine devices to explore the ocean’s depths.  He reported the earth to be round, but also once stated that on one occasion, the earth looked ‘flat’ with turned-up edges.  Gene Roddenberry – the creator of Star Trek – used Auguste Piccard as the inspiration for Captain Jean-Luc Picard.