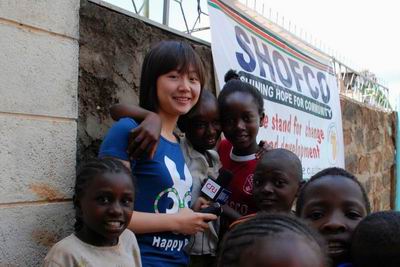 During late March, 2015, it was widely reported throughout the Western media that a Chinese restaurant – called the ‘Chinese Restaurant’ operating out of Kenya’s capital city Nairobi – had become the centre of a race-discrimination story.  What is interesting about this incident only becomes apparent when an objective position is taken in the study of the over-all situation and the manner in which the world media chose to cover this story.  Due to the emotive issues this story appears to raise, it is an ideal candidate for assessment through ‘deconstruction’.  The French philosopher Jacques Derrida taught that written texts contain a number of layers of information all designed to convey certain views and influence the reader toward unquestionably accepting various and diverse conclusions.  As all but the surface level of meaning in a text is hidden from obvious view, the underlying message(s) carried sub-consciously through the words (into the mind of the reader) are falsely interpreted by the reader as being the product of his or her own free choice and rational assessment of the story.  Although this political process of misleading and influencing the reader tends to operate continuously throughout the Western press in a subtle manner, occasionally its dynamic is obvious to perceive.  For instance, the racist United Kingdom Independence Party (UKIP) continuously issues statements that on the surface offer a superficial denial of its racist ideology, whilst the sub-strata of the very same statements fully confirm and convey the very racist ideology that is apparently being denied.  The point of this deception in texts (which includes written scripts for news articles, documentaries and films) is to convey an acceptable ‘mythic’ surface meaning (such as ‘fairness’ and ‘impartiality’).  Inherently racist texts composed and disseminated throughout bourgeois Western societies, use this veneer of acceptability to perpetuate their poison.  This is a well-known tactic used by rightwing supporting newspapers in the UK (such as the Sun, Daily Mail, Daily Telegraph and Metro, etc) dedicated to maintaining and spreading the racist message in the minds of their readers.

The Chinese language search-engine Baidu offers a very positive image of China-Kenya relations, and even the Wikipedia page concerning the presence of Chinese people in Kenya talks of Tang Dynasty artefacts being discovered in Kenyan villages, and the fact that Kenya was visited by Admiral Zheng Ho in the early 15th century.  From the late 1990’s, The People’s Republic of China (PRC) has invested heavily in Africa and African people.  This policy has been motivated from a political sense of ‘internationalism’ whereby the Chinese State has projected its wealth and good-will into areas of the world traditionally exploited and neglected by the forces of Western capitalism.  In part the bond that exists between Africa and China lies in the fact both peoples have been in the past the victims of a highly exploitative and destructive Western imperialism and colonisation.  China’s presence in Africa today is the consequence of a direct rejection of Western imperialist policies and thinking.  However, the Western press, being as it is the defender of bourgeois values, continuously misrepresents Africa and China by projecting its own behavioural norms upon the situation.  It is within the interests of the West to keep Africa poor and the African people exploited.  China’s application of Marxist egalitarian values has interrupted the Western policy of African exploitation, but more than this, the Chinese policy has also served to empower Africans (through economic development and cultural ties with China) so that the exploitative relationship with the West can be either redefined or abandoned altogether.  The Western media, smarting from this affront to its political hegemony, has predictably embarked upon a complete misrepresentation and smear campaign of Socialist China’s presence in Africa – falsely equating China’s activity with that of Western imperialism.

Due to China’s economic and cultural investment in Kenya, the Kenyan government’s position is that of official good ties and close relations between the two countries.  The joint China-Kenya resistance to Western imperialist attitudes has worked well, and continues to work well, this is why the ‘Chinese Restaurant’ story of 2015 contradicts this trend of good and productive relations.  There is no mention of this story on the Baidu search-engine other than a piece written in both Chinese and English which appears to have originated in the US dominated area of Taiwan.  This story reproduces the Western news article more or less word for word and in the comments section includes American-born Chinese often expressing anti-African-American viewpoints.  As this text did not arise in China it may be rightly considered a Western plant.  The story itself states that a Chinese restaurant in Nairobi has a ‘no blacks’ policy after 5pm and that this implies that all Chinese people are inherently ‘racist’ in Africa (like their Western counter-parts).  This statement must be clearly observed due to its contradictory implications as it suggests that the Chinese people – who are the historical victims of Western imperialism, colonisation and racism – are exactly the same as the Western people who inflicted racism upon them.  The rightwing press in the UK used the word ‘Black’ to convey this news story, but such newspapers as the Guardian referred to the those involved as ‘African’ – as did the Russia Today news article which is by far the most impartial account of this incident.  Esther Zhao was the Public Relations person who mediated with the press during this incident, and she only ever used the term ‘African’ and never ‘Black’.  She was widely (and falsely) reported throughout the Western media as being the ‘owner’ of the restaurant with some of the most vitriolic racism aimed at her personally.  As far as can be ascertained, the actual owners of the restaurant were never seen in public or interviewed.  Esther Zhao explained that the restaurant (and Chinese staff) had been the victims of criminal activity linked to the Kenyan Islamacist terrorist group known as Al Shabaab.  It was explained that the Chinese restaurant had suffered an armed raid in 2014 and that this raid had been a ‘terrorist’ attack that the Kenyan police had not took seriously because Chinese people were the victims.  The restaurant management took the decision to only allow African people they knew into the restaurant after 5pm as a means to protect the staff and customers from any further violent activity.  This was not a ‘no blacks’ policy (which has only ever existed within Western imperialism or colonialism) as was falsely reported by the Western media.

Although good relations exist between the Kenyan government and that of China, it is also true that the presence of Chinese people within Kenya is often met with dislike by some Kenyan people.  In fact the tensions are often so high that Chinese people living and working in Kenya have had to employ Kenyan public relations officers to mediate between themselves and their Kenyan employees.  The height of this apparent antagonism can be seen in a Nairobi TV news article that shows Kenyan reporters using Western anti-Chinese stereotypes to report this incident.  The Chinese are presented as the horrible and incompatible ‘other’ who are dirty, dishonest, and untrustworthy.  They are depicted as eating dogs and being thoroughly ‘alien’ in nature.  One particularly disturbing report in this news article states that the Chinese were running a brothel from the restaurant – an allegation not mentioned in any other article.  On top of being declared cultural delinquents, the Chinese people running this restaurant were also branded as sexual delinquents.  It was also reported that the Chinese Restaurant was operating without proper licences or permissions – which seems unlikely as it was also widely reported that Kenyan government ministers frequented the place quite regularly.  What has really motivated this incident and given it an international currency is that it is a racist attack upon Chinese people disguised as a racist attack by Chinese people upon African people.  The political rightwing has always contested that racism is ‘normal’ and exists in all cultures and this news story certainly seems to pander to that analysis.  However, despite the obvious Eurocentric racism espoused by Nairobi TV and the Western perpetuation of the misrepresentation of this story, it is clear that not all Kenyans are anti-Chinese, and that the Chinese people are certainly not all anti-African.  What this story conveys (but also hides behind the contentious issues of ‘race’ and ‘racism’ in Kenya) is that the staff and customers of this Chinese restaurant were the victims of a terrorist attack carried-out by Al Shabaab in 2014 and that no one outside of China actually cares.