Hundreds gathered between 5:30-7:30pm on Richmond Terrace directly opposite Downing Street in London.  As temperatures reached 28 degrees, concerned individuals and groups came together to remember the 2,200 men, women and children who were killed last year by Israel’s military forces.  This incident has been just one tragedy in a long line of murderous activity dating back to the formation of the Israeli State in 1948 – but which has its roots in Palestine before that date in Jewish terrorism.  This terrorism – which saw occupying British soldiers murdered by Jewish insurgents, is premised upon ‘Zionism’ or rightwing Jewish racism.  Like any racism, it demeans and dehumanises those it deems ‘inferior’ beings – and for the modern State of Israel – the victims are the Palestinians who due to British imperialism, have lost their ancient country to Jewish nationalism and colonisation.  The Palestinians are oppressed on every front and when they resist, Israel unleashes a massive military response – illegal action that is unquestionably support by the UK and the USA.  This demonstration remembers the victims of Jewish racism and calls upon the international community to stop supporting Israel’s Zionist racism and help the oppressed Palestinians.  This demonstration was arranged by the Palestinian Solidarity Campaign: 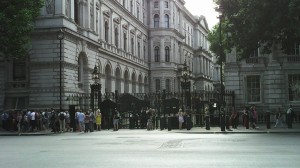