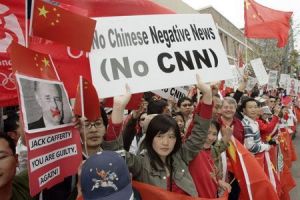 Translator’s Note: This article is from 2008 – but it is indicative of the casual racism aimed at China and the Chinese people around the world. In this instance, the racism is from the US mainstream media – aided and abetted by the US government. The US government takes the position that racism aimed at China is legitimate if it is aimed specifically at the ‘Chinese government’. Of course, this is what is called a ‘straw dog fallacy’, whereby a false argument is created to support an untenable position. Racism against one person of Chinese ethnic origin is the manifestation of racism against at ALL Chinese people – and no legitimate distinction can be made between the Chinese government and the Chinese people. Eurocentric racism has been aimed at Chinese people throughout the world ever since Europeans and Chinese people first came into contact with one another. This type of discrimination was present against the Chinese people when China was an imperial empire, a Nationalist Republic, and a People’s Republic. Therefore it is obvious that the US will always racially discriminate against China regardless of the political system it adheres to. A manifestation of this overt racism can be clearly perceived in the strictures of the US 1881 Chinese Exclusion Act – an act that has gone on to serve as a model for ALL European anti-migrant laws. Eurocentricism is premised upon the false premise that white Europeans are racially superior, when biology and science has firmly proven otherwise. US racists find this reality difficult to accept – particularly as ‘Communist’ China moves economically and technologically ahead of the US ‘Capitalist’ system in every conceivable manner. ACW 5.7.15

US mainstream media turned a deaf ear to the CNN media outlet when it insulted China in its broadcasts. As a result, virtually no Americans heard of this matter, whilst US officials kept a low profile. In the meantime, Cable Network News (CNN), trying to avoid and shift blame for the anti-China comments made by their presenter Jack Cafferty, refused to constructively respond to a ‘International Pioneer Review’ reporter’s question, other than with ‘no comment’.  Whilst the Chinese Foreign Ministry demanded an apology from CNN for its anti-China statements, the 65 year old Jack Cafferty continued to maintain a swaggering and arrogant persona on TV, apparently unrepentant for the offense he had caused.

On the 10th of April (Beijing time), 2008, Jack Cafferty was covering the Beijing Olympic Torch as it travelled through San Francisco. Jack Cafferty attacked China and the Chinese people with the following statements:

“The event is stage managed and the participants forced into participation.’

“Chinese technology and other goods are sub-standard and inferior!”

“The Chinese system comprises of uneducated morons and violent thugs.”

On April 15th, Chinese Foreign Ministry spokeswoman Jiang Yu said (in answer to a reporter’s question), that Jack Cafferty’s remarks constituted a vicious attack on the Chinese people, and whilst expressing shock and strong condemnation, solemnly urged CNN (and Cafferty himself) to withdraw these harsh remarks, and issue an apology to all Chinese people. CNN immediately issued a counter-statement on its website supporting Jack Cafferty’s insulting remarks about China, asserting that the remarks were legitimate as they were directed at:

“The Chinese government and not the Chinese people.”

The evening of April 16th, the Chinese Foreign Ministry Information Department Director – Liu Jianchao – summoned the CNN Beijing representative, and made a formal complaint about Jack Cafferty’s vicious attack on the Chinese people, whilst respectfully urging a reconciliation of the matter.

On April 17th, Chinese Foreign Ministry spokeswoman Jiang Yu said that CNN’s statement was an attack on the Chinese government designed to sow discord between the Chinese people and its government – and that this situation was totally unacceptable. She said:

“The Chinese people cannot be bullied, and cannot be humiliated. We once again solemnly urge CNN to take this issue seriously and immediately retract these insulting words and make a sincere apology to all Chinese people.”

The US media responded by playing down the incident – but did not issue an apology – instead CNN further insulted China. Our reporter continually called CCN headquarters in Beijing – and no one answered. Another complication was that the CNN headquarters is located in the Jian Guo Men Wai Diplomatic Residence Compound – and as such, CNN did not have to grant interviews with reporters. The idea that CNN applied a policy of ‘collective obscurity’ is not unexpected, as the slightest trouble in the US is greeted with a blanket suppression of the US media. The US-CNN hypocrisy is palpable.

Cafferty sparked this issue on April 10th – which has caused consternation throughout China and Chinese people living abroad, and despite the demand for a retraction and apology by CNN from the Chinese Foreign Ministry, CNN has refused to acknowledge the extent of their insult against China, although some other Western media outlets have assured Beijing that CNN does not speak on behalf of all Western countries. China has clearly and carefully presented this case to CNN – but CNN has made matters worse by supporting Cafferty and applying a blanket silence.

As the US media has operated a blanket silence over this issue, most ordinary Americans remain unaware of the entire situation – whilst Jack Cafferty refuses to answer questions from an ‘International Pioneer Review’ reporter.

After CNN insulted China and created this incident, the US government has maintained a low profile and has refused to comment. At a routine press conference in the United States, the US State Department spokesman Sean McCormack was asked about this incident and whether the Chinese government has been in contact with the US State Department. He smiled, and whilst playing the ‘Pushing Hands’ (i.e. passing the buck), he said:

“I do not know if there has been any contact. You can turn to your right, and ask CNN’s correspondent about any responses to China’s claims. I suggest you go to CNN. ”

Balanced reporting without bias, focusing on the facts and adding background information – these principles are usually written in the first pages of books specialising in US journalistic ethics, and media practice guidelines. However, Cafferty’s remarks clearly violated the scope of press freedom and freedom of expression, and contain the danger of manufacturing false news and distorted information, which has the potential to evolve into a language of violence and racial hegemony. It is ironic that the US media in general, and CNN in particular, do not abide by their own media guidelines when reporting events, and support one another’s misdeeds with a policy of ‘collective silence’.

Starting from April 10th the Chinese migrants living in the Silicon Valley area founded a group – the National Association of legal immigrants (LIA) – which joined China in the protest, demanding that Cafferty and CNN apologize for the deliberate and intentional offense against China and the Chinese people, with the added suggestion that Cafferty no longer work in high-profile media again. Working together, the LIA has worked with the Chinese media to make this matter known on the net, and throughout the media so that ordinary people in the West can understand what has happened – as their media has deliberately kept them in the dark. This action is designed to expose the ‘casual racism deployed by Cafferty’ and endorsed by CNN.

On April 18th (local time), more than forty members of the Chinese community in Los Angeles gathered to plan a law suit against CNN, claiming damages of $130 million. From 9:00am on the 19th, Chinese migrants and Chinese students from the Los Angeles and surrounding area – more than 5,000 people – gathered in front of Sunset Boulevard in Hollywood, at the CNN office buildings on both sides of the street. They waved Chinese and American flags and placards reading ‘CNN is a liar’, ‘dismiss Cafferty’, and ‘Stop the media distorted reports’, amongst other slogans. This was interspersed with shouting slogans in English and Chinese, and singing the song ‘Ode to the Motherland’. It is reported that this was the biggest ever public protest by the Chinese community in the Los Angeles area.