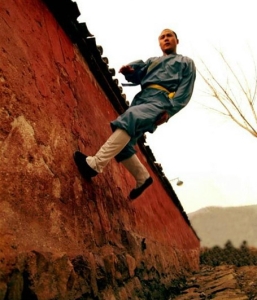 Translator’s Note: The following is a short extract from a much longer interview with Abbot Yong Xin (永信法师), carried-out by Global People Magazine in October, 2011, at the Shaolin Temple in Henan province, China. The interview explores the then recent media storm that had grown over the internet allegation that monks at the prestigious Shaolin Temple (founded in 450 CE) had been engaged in all types of worldly behaviour – including intimate relationships with women, etc. The government of China thoroughly investigated these claims and without exception, found everyone to be false. In this interview, Abbot Yong Xin explains his indifference to the media storm, and explains that the Chinese Buddhist Sangha follow the Vinaya Discipline by law, and are not able to pick and choose what they might follow and what they might not follow. One specific paragraph is of particular interest as in it, Yong Xin adds more information to the already known details surrounding Xu Yun’s involvement in the 1953 re-constitution of the China Buddhism Association. If is this paragraph that I have translated. ACW 19.2.15

Global People Magazine: From an ordained Buddhist perspective, how would you interpret the seven emotions and six sensory desires?

Abbot Yong Xin: It is simple; ordained Buddhist monastics in China are not permitted to enter into any amorous relationship whatsoever. Strict celibacy is part of the great (or ‘full’) ordination ceremony, and anyone who breaks this moral requirement will have to leave the ordained Sangha and return to lay-life. Such behaviour is part of the world of burning desire, and so we are protected from it by our precepts. After the founding of the New China (in 1949), there was a great gathering of Buddhists from every corner of the country, representing every type of school. At that time there were a group of so-called ‘Buddhist monks’ in China who had trained in Japan and had subsequently got married and had children. They could do this because this is considered normal behaviour in Japan. They attended this great meeting of Buddhists in China and requested that the government of China abolish the requirement of the Chinese Buddhist Sangha to follow the Vinaya Discipline, and bring China in-line with Japanese practice. The venerable Xu Yun (who lived to 120 years old) was in attendance of this meeting when these monks arrived and made their case. He listened quietly to these monks and then hit his palm on the table in an angry manner. He stated that a Buddhist monk and his robe cannot be separated, and that in China, a Buddhist robe signifies the practice of both strict celibacy and vegetarianism – without the Vinaya Discipline – Chinese Buddhism simply would not make sense. Li Ji Shen referred this dispute to Zhou Enlai (who discussed it with Mao Zedong), and it was agreed that Xu Yun was correct. This decision was taken because at the time certain members of the international community were attacking China with regards to human rights issues. From that day onwards, traditional Chinese religion has been protected under law.