This event was organised and supported by Animal Equality, Animal Aid, and the Vegan Society, amongst others, who are campaigning against the cruelty animals are subjected to within the commercial farming process, and the killing of animals (in slaughter-houses and elsewhere) for human consumption.  As Buddhists and Socialists we attended in the spirit of solidarity, representing Animal Voices Torbay, a group that does much to help animals locally.  This event occurred simultaneously around the world including London, Toulouse, Toronto, Istanbul, Zagreb, Houston, Sao Paulo, Rio de Janeiro and Bauru in Brazil.  A similar demonstration in Paris happened on the 25.5.13.

The message is twofold: animals are treated in a despicable manner from birth to unnatural death, and this process is the product of an uncaring commercial system that treats animals as unfeeling, inanimate objects.  Animals are sentient beings that feel pain, fear, and terror during their short lives.  To stop the commercial farming of animals people are encouraged to become vegetarians and/or vegans.  If enough people changed their diets, then the capitalist system that exploits animals would collapse.  Many believe that animals are equal to humans, but suffer due to the fact that they are viewed as inferior.  This flawed perspective is called ‘Anti-speciesist’: 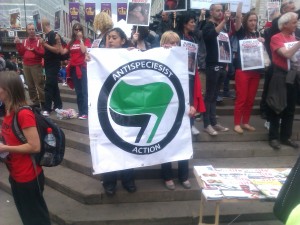 Around 200 people attended the rally:

There were a number of poignant speeches delivered by various animal rights campaigners that explained the dreadful plight of animals in the world and how each individual can help change this situation by changing their attitudes and eating habits.  It was agreed that people need to be educated about what is actually happening to animals within the process of commercialised farming: 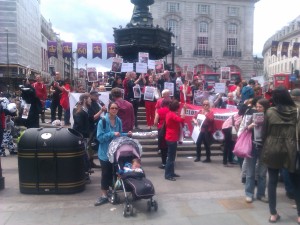 This was a very successful rally that achieved its objective of raising awareness of the issues surrounding the treatment of animals in farming, and which assisted the educational process by giving out free information regarding vegetarianism and veganism.  The event was well organised and disciplined throughout.