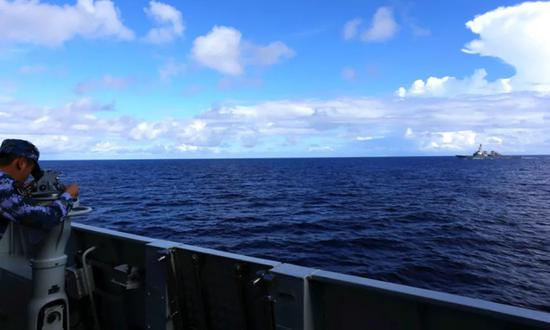 The Chinese People’s Liberation Army (PLA) Southern Theatre Command on Tuesday morning discovered that the vessel had trespassed into waters around the Nansha Islands in the South China Sea without China’s authorization, and followed and warned away the guided-missile cruiser.

The US military’s actions are a serious violation of China’s sovereignty and security, and irrefutable proof of its hegemony in navigation and militarization of the South China Sea, Tian Junli, a spokesperson from the PLA Southern Theater Command, said on Tuesday, noting that such behavior fully reveals that the US is the provocateur against peace in the region.

In July, the destroyer USS Benfold sailed near the Nansha Islands in the South China Sea only a few days after it was driven away by the PLA from Chinese territorial waters off the Xisha Islands.

Consecutive provocations by the U.S. expose not only its navigational hegemony, but also its anxiety in the face of the growing capabilities of the PLA, experts said.