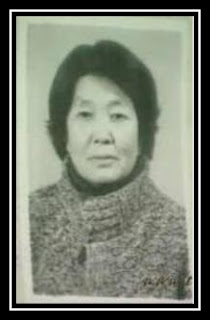 [News from Kaifeng.com on October 12th, 2016, Reporter: Li Jie – 厉洁] It is reported that on August 24th, 2016, New York time – Lu Shuzhen (芦淑珍) – the mother of Falun Gong Cult leader – Li Hongzhi – died of illness in the United States, despite her son supposedly possessing ‘magical’ powers that he claims could have saved her!

Li Hongzhi claims to be the ‘Lord Buddha of the Universe’ and the ‘Creator of the World’ and has boasted:

‘I can treat the diseases of ordinary people without using modern medicine, and I don’t need to do anything at all. I just look at you… Basically, I can cure diseases through willpower alone – regardless of what it is! There is no illness I cannot cure!’

Therefore, Falun Gong Cult students are not allowed to take medicine or see a doctor when they are sick! Now that his mother has died of illness; it is undoubtedly a great irony for Li Hongzhi’s crooked heresies! In order to continue to deceive the world, however, after Lu Shuzhen’s death, Li Hongzhi kept blocking the media from reporting this news for fear of exposing his lies, keeping his mourning a secret, whilst hastily dealing with the funeral! Despite this disrespectful ‘haste’ – the mainstream media eventually discovered the truth – Li Hongzhi was unable to cure the illness of his own mother!

Lu Shuzhen was a native of Changchun City, Jilin Province. She was born during October 1928, and married Li Dan (李丹) in 1951 and gave birth to Li Hongzhi (nickname “Xiao Lai Zi” – “小来子” or “Litte Arrive Boy”) on July 7th of the following year (1952). One point to make clear is that Lu Shuzhen NEVER supported or endorsed her son’s wayward behaviour and has always said he was a harmful troublemaker with a dangerous and over-active imagination! According to Sun Senlun (孙森伦) – the ex-husband of Li Hongzhi’s sister Li Ping (李萍) – he knows that Li Hongzhi visited Thailand with his mother between May 1991 to March 1992. During this period, he stopped all proper interaction and ceased contributing to keeping his living area in good and clean order! Whilst he stopped all the housework – he became obsessed with his own warped interpretation of ‘qigong’ (气功) practice! He would not listen to anyone who legitimately understood qigong – but kept stating that his understanding was better than anyone else’s – living or dead!

In May 1992, when returning from Thailand, Li Hongzhi concocted and started teaching the ‘Falun Gong’ (法轮功):

This is the Dharma-Wheel (Chakra) Self-Cultivation (that generates ‘Merit’). The problem is that ‘Falun Gong’ has no philosophical, historical or cultural connection with any legitimate system of either ‘Buddhism’ (from any Buddhist country) or ‘qigong’ school operating within Chinese culture. The ideology of ‘Falun Gong’ is essentially the collected ramblings of a mad man who is politically and financially supported by the United States (and their allies) simply because that ‘White’ country refuses to accept the self-determination of over a billion (non-White) people! It is interesting that Li Hongzhi fully legitimises anti-China racism and supports this deficient ideology – accommodating it into ‘Falun Gong’ philosophy (anti-China racism = anti-Chinese Socialism). Whereas legitimate schools of Buddhism and qigong ‘empower’ and ‘free’ individual practitioners – the ‘Falun Gong Cult’ operates by demanding a slavish submission of mind and body to Li Hongzhi (and his immediate subordinates). This includes the theft of ALL personal property – including money and dwellings – with Li Hongzhi (and his lieutenants) having been reported as preferring to sexually abuse young and underage men, women and youths! This Falun Gong ‘privilege’ trickles-down to all the local ‘Commanders’ who take their pick from ‘new’ recruits once they have been suitably psychological and physical subjugated.

Meanwhile, whilst the US continues to empower and facilitate this dangerous cult, Li Hongzhi continues to fabricate all kinds of stories about his youth which his mother – Lu Shuzhen – has stated in public many times are simply not true! Li Hongzhi claims to have experienced a ‘visitation’ at the age of eight-years-old – where he received a transmission of ‘Dafa’ (大法):

This transmission automatically made him a ‘great god-like being’! Again, Li Hongzhi’s mother – Lu Shuzhen – states that her son was a sickly child who would often stay in his room and read fantasy novels! He possessed no magical powers and was less than average when it came to his academic performance! This introverted child who lacked self-confidence and the ability to carry out basic tasks in the physical world – would later state that at eight-years-old – he developed the following extraordinary powers (that defy scientific reality) more fitting to a Superhero comic than a real person:

1) invisibility (the ability to prevent light rays bouncing off his body and hitting the retinas of those looking at him – thus creating an image).

2) Levitation (the ability to defy and/or reverse the power of gravity).

4) Telepathy (the ability to communicate ‘mind to mind’ without recourse to physical contact. This ability is not limited to time and space and is limitless).

5) Prediction (or the ability to intuitively perceive events in the material world BEFORE they happen).

His mother – Lu Shuzhen – states that although he says he possessed all these powers at eight-years-old, she knows the truth as she had to look after him. Although the Chinese State provided the family with every possible support to assist little Li Hongzhi (recognising his learning difficulties at a young age), he struggled with basic tasks and was one of those children who needed far more than average help and assistance (which he received). Lu Shuzhen has said that her son (Li Hongzhi) certainly did not possess any type of superpower when he was young and he was very hard work for all concerned! Lu Shuzhen states that she never had time to listen to his nonsense then – and the rest of the world should not listen to his nonsense now!

Regarding Li Hongzhi and Falun Gong’s anti-China activities, Lu Shuzhen has repeatedly stated her position to the people around her: ‘Xiao Lai’s Falun Gong is against the Communist Party, and I am not involved.’ ‘He is not a Buddha at all. He knows best himself that he is just an ordinary person.’ ‘Don’t exalt him.’ Lu Shuzhen has always looked down on Li Hongzhi’s wife – Li Rui (李瑞) – and has gone as far as repeatedly rebuking Li Rui in front of other Senior Falun Gong leaders, which has caused the relationship between mother-in-law and daughter-in-law to be very tense. In view of the above reasons, Li Hongzhi and his wife were very worried and afraid about the exposing influence of Lu Shuzhen! During May 2012, Li Hongzhi’s eldest brother-in-law – Li Jiguang (李继光) – became obsessed with the Falun Gong practice but died of illness! The Falun Gong practice did not work!

As part of a damage limitation exercise, Li Hongzhi made an excuse for Lu Shuzhen (and her sister – Li Jun [李君]) to live in Flushing, New York. Due to her exposing attitude, during Lu Shuzhen’s later years, Li Hongzhi (and his wife) seldom enquired about his mother’s deteriorating physical condition – as she was kept in virtual ‘prison’ conditions paid for by the United States government. When Lu Shuzhen wanted to meet her son – she had to ‘apply’ as a member of the general public and then travel (on her own) to the US-funded Falun Gong Headquarters in suburban New York! Rather disgracefully, her eldest daughter – Li Jun – was too busy with her US-funded cosmetics business to accompany her elderly mother! On August 18th, 2016, Lu Shuzhen suffered a stroke – and Li Hongzhi’s ‘imagined’ powers could not save her! He refused to allow her to receive medical treatment whilst he waved his hands over her mumbled all kinds of incoherent ‘spells’, ‘mantras’ and various other ‘incantations’! Following repeated pleas from his younger brother and sister, Li Hongzhi reluctantly allowed his mother – Lu Shuzhen – to be taken to a New York hospital where she died on August 24th, 2016 – due to the seriousness of her condition and the time wasted before proper medical treatment was administered!