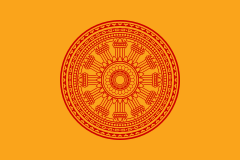 The concept of a multi-coloured Buddhist flag was designed in 1880 by Henry Steyr Alcott – a retired American army colonel. He probably got the idea from the five-coloured’ Daoist flag – the defining concept of which associated a distinct colour to a geographical location. This concept of colour-coding for four ‘cardinal’ compass-points and the theoretical ‘centre’ dates back to at least the Zhou Dynasty. On April 17th, 1885, this multicoloured Buddhist flag was officially adopted in Sou Lanka as an ‘International’ symbol representing faith and peace for the first time. The World Buddhist Friendship Association was established in Sri Lanka in 1951, and the Buddhist flag was designated as the preferred flag, which was gradually recognized by Buddhist believers all over the world and became the common symbol of international Buddhism.