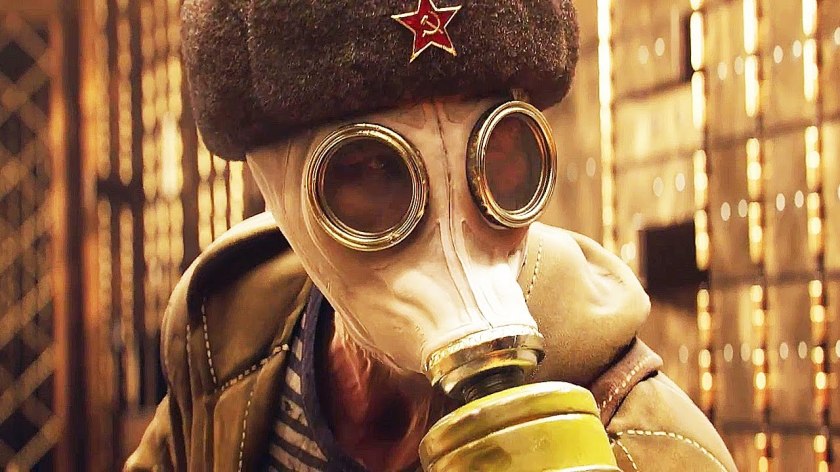 I worked for the defence industry during the Trump Administration. I was in-charge of security for a large scientific research base somewhere in the Mid-USA. The project parameters involved feasibility research into various types of genetic splicing. This had ‘come from top’ – according to the paperwork. Supposedly, President Trump had got talking with a fellow-sufferer of Covid19 when both were isolated somewhere or other in a secure underground government facility. To pass the time during his self-isolation, Trump was introduced into ‘dogman’ stories. His companion told him that many ordinary Americans literally believed in the ‘Dogman’ myth – but that no evidence had ever been found to support the existence of these ‘cryptids’ (a new term for Trump). Like a European ‘werewolf’ but more dog than wolf (and more ‘human’ than ‘dog’) – these creatures are often reported roaming the hinterlands of America. Quite often they are stood upright (like a human-being), whilst at other times they can run very fast (matching the speed of a car) whilst on all fours. Unlike a werewolf, however, ‘Dogmen’ often stand eerily ‘still’ in the tree-line and quietly ‘watch’ human-beings in a curious manner. On occasion, ‘Dogmen’ form a pack and attack human settlements such as houses, farms and camping sites, etc. Domestic dogs are sometimes killed simply because they defend their owners from what many dogs must seem are their distant cousin!

This latter fact of violence intrigued President Trump. He asked his Secret Service guard to make a note. Could these strange creatures be ‘weaponised’ to defend America from its internal and external enemies? If the Americans possessed these creatures, what about China, North Korea, Cuba or even Russia? What if these countries managed to weaponize these creatures first? From his sickbed – Trump issued an Executive Order putting into immediate effect ‘Operation Dog-Breath’. It was to be handled by the CIA and FBI – with input from the NSA. The cover-story – if discovered – was that liberals, antifa and Bernie Sanders were uniting to bring-down the US from within through bizarre animal experiments involving cruelty and decadent sexual fetishes! Indeed, this story would be released anyway, to the US media at a later date to throw the Democrats off the scent. In the meantime, it was important that the foreign intelligence agencies did not discover this plan or infiltrate it at any point. This is why Trump had the man laying opposite him immediately arrested and placed into solitary confinement.

Trump ordered that police patrols roaming Black, Hispanic and Asian areas should gather together as many domestic dogs as possible during the day – and human male and female suspects during the night! These animals and their human owners were to be ‘sacrificed’ for the greater cause of ‘Making America Great Again’! Once so many hundreds had been apprehended in this way (for no reason at all), they were shipped to this facility. They arrived confused, angry, tired and hungry, etc! All were asking for lawyers and making us laugh! This lightened the mood somewhat, as these types of operations can take their toll upon the welling-being of the staff! It is good for them to let off steam and interact (in a limited manner) with the captured subject matter. Their heads were shaved, their clothes taken away and destroyed – before they were ‘showered’ and placed in special uniforms. By this time the women were begging and the men were shouting. The next stage was forcible sedation and all was quiet. Certainly, quieter than a regular prison – but then there was no Human Rights in this place. Soon, there would be no ‘humans’ – so it all balanced-out at the end of the day.

In many ways, the animals were much easier to control. All were assessed for ‘fitness’ with those failing the test quietly ‘removed’ from the system. The scientists stated that they had observed a correlation between the human owners and the dogs they chose to own. By and large, this correlation was maintained during the genetic splicing process, although not always maintaining the original ‘pet to owner’ ratio. Trump had had the idea of trying to create ‘Dogmen’ of different races, trying to avoid strictly ‘Caucasian’ admixtures so that the minorities could be ultimately blamed for everything when the public (and liberal press) got a hold of it. Watching the splicing was not a pretty sight, but every advancement in science has a cost for humanity that has to be paid. Tubes, computer screens, drills, saws, operation gowns and plenty of medical staff all milling about added an air of legitimate scientific endeavour to it all. Trump was of the opinion that if he personally unveiled a functioning ‘Dogman’ at one of his press conferences – the upcoming election would surely be his! From what I gather, the early experimentation went very well. Surprisingly well, in fact. This produced three functioning prototypes in a matter of a few days.

Three ‘Dogmen’ – an African, a Hispanic and an Asian – were strapped into secure seats bolted to the floor. All were over 6 foot tall, heavily muscled throughout the upper-body with slim waists and muscular and agile looking legs. The heads looked like over-sized German Shepherds with permanently pointed ears, long snouts and very large serrated teeth! They stared straight ahead and appeared calm and almost ‘calculating’. They were calm and unbothered by their circumstances – as if they knew something about reality that we did not! It was unnerving even for the most experienced of us present in the room. They were being shown flash photographs of Bernie Sanders and Greta Thornberg – interspersed with pictures of Al Qaeda atrocities, nuclear explosions and US soldiers abusing pyramids of Iraqi POWs! Every now and again, Adolf Hitler would flash into being and just as quickly disappear again. These creatures appeared completely ‘unmoved’ and yet it was clear that they were intelligent and absorbing everything they saw, sensed and experienced. I noticed that even their claw-like fingers never moved – not once!

These three specimens appeared pliable and allowed the scientific staff to move them around without incident. As they became ever more trusted, less security restraints were deployed. Testing their musculature revealed that they could assert at least 2000 pounds of grip whilst still appearing calm. What could they produce in a rage? Whilst relaxed, the ‘Dogmen’ could produce the same strength as an enraged adult gorilla! None appeared to have any memory of their past existences. They all adopted an attitude of being existentially present, and living fully in the moment, as if this reality had always existed and their past lives were nothing but a bad dream. This was shown through the agility tests that saw every one of the three specimens cover assault courses and difficult terrain with far more fluidity than the average parkour practitioner – never making a wrong-step. They appeared to understand human language and verbal instruction – although none ever demonstrated an ability to talk in return. One day all this changed. Once they had undergone all the training we had planned for them – three decided it was time to leave. One night, whilst the lights were dimmed for sleeping, the three left the facility. One had quickly killed a guard whilst the other two extracted an eyeball from the body and tore-off one of his hands. Together, these appendages got them through the layers of security. What they couldn’t open – they killed. The last time anyone saw them – they were ‘disguised’ as MAGA supporters and were mixed-in with thousands taking part in the attack on Congress! Five people got in their way and paid the price.