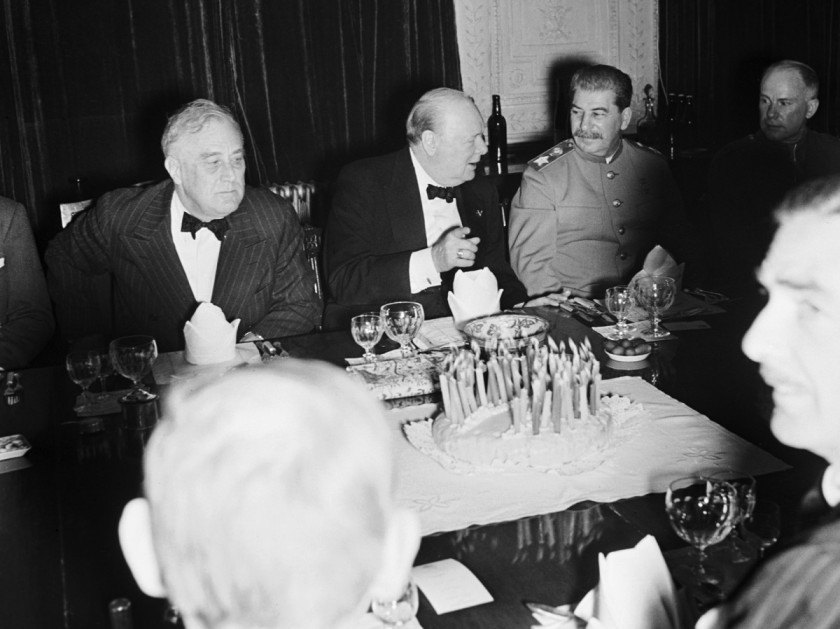 Churchill originally stated that he thought all Nazi German (and Axis) War Criminals should be ‘shot’ as quickly and as quietly as possible at the end of hostilities to save both time and money for the Allies. This was to avoid any complications associated with a ‘military’ trial having to be ‘adjusted’ and ‘justified’ from a complicated legal perspective, to operate in the realm of ‘civil’ law. A Court Martial can last about a minute – followed by the condemned being immediately ‘shot’ – but this was felt to be too quick and from the position of Civil Law – ‘unfair’. It was the Soviet leader – Joseph Stalin – who suggested that each of the accused should have be afforded with the automatic ‘right’ to a trial presided over by the four principal Allies – the US, UK, France and the USSR. Furthermore, Joseph Stalin was of the opinion that the trial should be ‘international’ in legal context, with a careful consideration of which part of what legal system or tradition should be used to judge some of the gravest crimes and atrocities ever committed in the history of humanity. President Roosevelt agreed with the position of Joseph Stalin and was alarmed at the opinion of Churchill. As the French were in favour of a careful recording of all the Nazi German crimes (particularly those suffered in their country), they also supported the view of Joseph Stalin and Churchill’s idea of summary executions was voted down. Churchill’s opposition to the trials ended (according to the work of Christopher Dodd) after the suicides of Hitler and Goebbels. At the Tehran Conference (which started on November, 28th, 1943), Joseph Stalin, Roosevelt and Churchill met over a number of days to discuss what the Allies would do at the end of the war. Although Churchill was excluded from a number of meetings between Stalin and Roosevelt – Roosevelt discussed the establishing of an international organisation that would include the four Allies plus China (a point he was adamant be accepted). Furthermore, at a Soviet Embassy Dinner, Stalin – knowing that Churchill favoured ‘summary executions’ – made a joke at Churchill’s expense, suggesting the Allies should only ‘summarily shoot’ shoot between 50,000 to 150,000 Nazi War Criminals! Roosevelt – playing along – responded by suggesting that the number should be kept to just 49,000! A disgruntled (and ungracious) Churchill replied by expressing the exact opposite to his personal view and the view of the British government (which would not change for another two years) by stating that neither he (nor his country) would partake in any punishment of Nazi German War Criminals without them first being subjected to a ‘trial’. Was this Churchill’s attempt at a ‘joke’, or was it a blatant ‘lie’? Whatever the reality, the above exchange has been used in support of the usual ‘inverted’ US (anti-intellectual) narrative that came to represent the Cold War. Numerous (Western) authors now cite this exchange (bizarrely) as ‘proof’ of Stalin’s maniacal and insane personality, and of Churchill’s just, caring and above all ‘democratic’ attitudes! This deliberate ‘misreading’ and ‘falsification’ of Soviet history is a mainstream phenomenon in the West, and even raises its head from time to time in modern Russia!

Earl F Ziemke: The Soviet Juggernaut, Time Life, (1984), Pages 69-71 (Includes the story of the above exchange and implies Stalin is ‘sinister’). EF Ziemke usually writes excellent Soviet history – but ‘Time Life’ is notorious for its distortion of history and deliberate misreading of Soviet history. The Time Life Editors ‘added’ and ‘omitted’ from Ziemke’s original text which they thought not critical enough of the USSR!  Despite this interference, this book still contains much history of merit due to the quality of the historian.