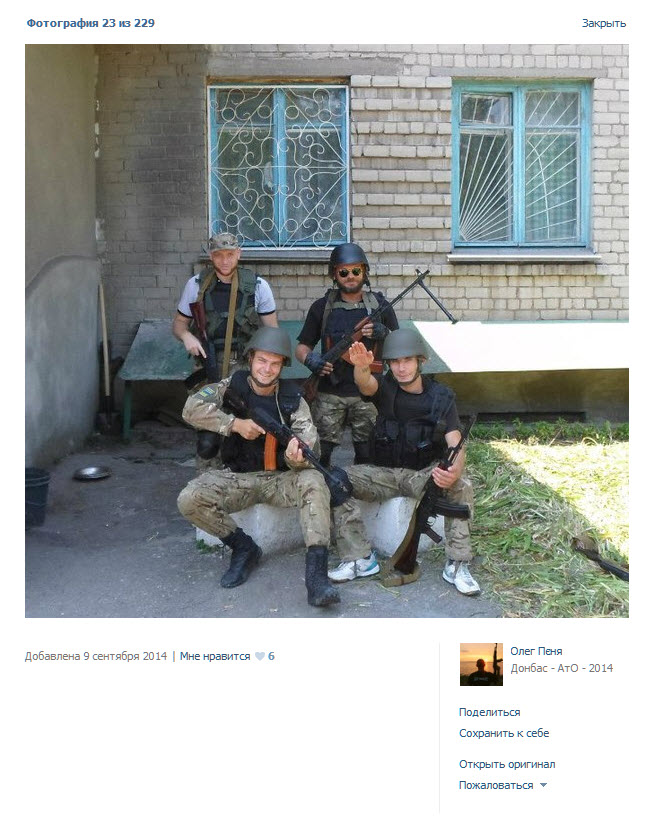 It is no secret that despite the US admiration for Adolf Hitler, its war with Japan (and subsequent support of Great Britain) during WWII, necessitated its alliance with the Soviet Union. In reality, despite its dislike of Communism, the capitalist West was obliged to sit-back and observe the Red Army carrying-out the lion’s share of the fighting against Nazi Germany, with D-Day only occurring when a Soviet victory looked certain and unstoppable (the Western Allies could not risk the Red Army rolling back the Nazi German Army all the way to the French coast and into Scandinavia, etc. The risk of the popular Red Army ‘liberating’ Western Europe was not allowed by Roosevelt or Churchill, as there was a very great risk of the European workers rising-up in Revolution! Despite the immense Soviet loses, both Churchill and Roosevelt worked behind the scenes to undermine the Soviet regime with US and UK-supplied arms found amongst the possessions of the neo-Nazi insurgents in the Ukraine from 1945-1947. These were Ukrainian ultra-nationalists (many of whom had served in the 14th Waffen SS Grenadiers Division 1st Galician), led by non-surrendered Nazi German officers. This Western duplicity toward the USSR was intensified and codified into the psychosis of the ‘Cold War’ by President Truman (and an out of office Winston Churchill) after WWII.

The Obama Administration in the US was initially thought to be a liberal-left regime, but this turned-out to be false. President Obama pursued a ruthless anti-Russian policy by undermining the democratically elected government in the Ukraine, and encouraging EU-separatism, neo-Nazi atrocity and general criminality. The idea was to eradicate the pro-Russian mentality evident within much of the Ukraine and incorporate that country into the European Union (EU). Once accomplished through a mixture of pro-Western neo-Nazism and Ukrainian ultra-nationalism, the Ukraine would be integrated into the US-controlled NATO – with US, UK and EU troops being officially allowed to take-up permanent positions along the Russian border with the Ukraine. From 2012 onwards, the Obama Administration continuously opposed a UN Resolution opposing the glorification of neo-Nazism and fascist history – Obama had to oppose this Resolution as it threatened to undermine his entire policy within Eastern Europe (which encouraged any and all neo-Nazi and fascist regime providing it was pro-Western and anti-Russian). The UK under the Tory-LibDems Coalition continuously ‘abstained’ from supporting this UN Resolution because Britain had been wedded for some time to supporting this aggressive form of US foreign policy in the world.

Whilst encouraging, financing, arming and directing numerous neo-Nazi and far-right groups throughout the Ukraine, the US has managed to bring the neo-Nazi ‘Maidan’ to power. This political movement supports the EU because the EU is controlled and directed from Washington and is essentially anti-Socialist in nature. The European Union grew-out of US interference in the post-WWII reconstruction of Europe and was conceived as a vehicle for transforming Europe into a version of the United States that fundamentally opposed the Socialism of the Soviet Union. This explains why EU legislation demands the end of all Unions, nationalised industries and Socialist health and welfare systems. The neo-Nazi Maidan regime equates this ‘anti-Socialist’ EU position with that of historical anti-Soviet and contemporary anti-Russian US attitudes. The US is content to accommodate neo-Nazism in Eastern Europe as it is also historically opposed to Russian political independence and self-determination. Perhaps the most disgusting part of this latest amoral US strategy is that it is designed to cause maximum offence to the Russian psyche – a country that lost between 27 – 40 million men, women and children in its fight against Nazi Germany during WWII, and probably represents an US effort to start a war with Russia (as capitalism views wars as good for business).

We are left with a regime operating out of Western Ukraine that has its roots in pro-EU oligarchs, pro-EU and anti-Russian neo-Nazism and a criminal element who will pursue any destructive action for short-term profit and advancement. Undoubtedly this horror show of a regime is held together by very strong ultra-nationalist viewpoints which eulogist the Nazi German invasion of the USSR, identify with Nazi German culture and attitudes, and propagate a deep race-hate toward the Russian Slavs (an attitude held by Adolf Hitler). The US pursues this policy in the open on the one-hand, and tries to hide it on the other. The UK and Europe suffered terribly under Nazi German occupation and oppression during WWII, and although the governments of the UK and EU know full well what the US is doing in the Ukraine, UK and EU media is conspiring NOT to truthfully report what is really happening in the Ukraine. Facebook, for instance, as a perpetrator of US neo-imperialism is famous for censoring the below (Azov) photograph because it raises too many concerns in the minds of those who see it. Indeed, this attitude of encouraging neo-Nazism in the Ukraine on the one hand whilst denying the existence of the policy on the other, has extended into the minds of the Western supporters of the neo-Nazi Maidan regime, who try their best to placate, deny and accommodate the obvious ultra-nationalism of this movement.

This photograph first surfaced on the internet on 18.11.2014, through the VK account of one  ‘Oleg Pyenya’.  It was deleted not long after, but not before it was seen by many others, copied and screen-shot:

He is an outspoken Ukrainian neo-Nazi supporter and a member of the neo-Nazi Azov Battalion in the Ukrainian Army (serving the Maidan regime in its attack on Eastern Ukraine). Indeed, he is identified in the picture apparently holding up the Nazi German swastika flag: 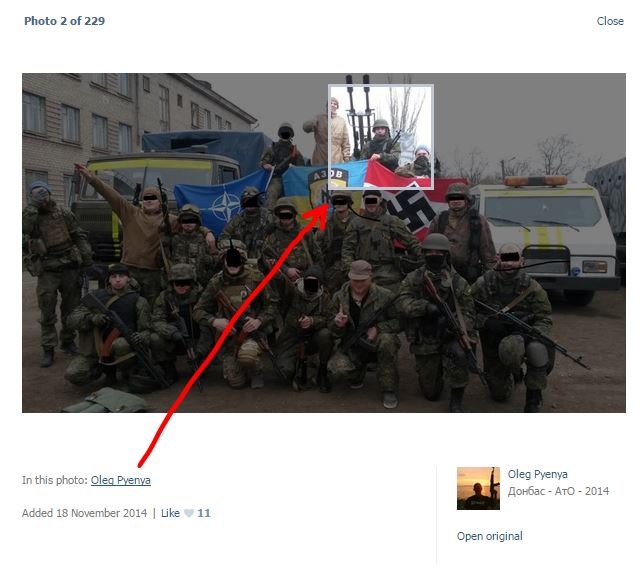 As I have linked the VK account of neo-Nazi Ukrainian Oleg Pyenya above, readers are free to browse his extensive archives of neo-Nazi material. This is the reality of Western-backed neo-Nazism on the ground within Western Ukraine, and it is not an isolated case, but one example amongst many. The US ideologues (and their supporters), however, would have you believe that all this Ukrainian ultra-nationalism and neo-Nazism is a product of President Putin and is nothing but pro-Russian separatists ‘dressed-up’ in neo-Nazi regalia and pretending to be ‘neo-Nazis’! This inverted and illogical approach is typical of US anti-intellectualism generally aimed at keeping US citizens uninformed and stupid, but here is an example of its attempted exportation to another part of the world. I accessed Chinese language sources and found this photograph routinely used to express the true leanings of the neo-Nazi Maidan regime in Kiev (which banned the Ukrainian Communist Party in 2015). Supporters of neo-Nazi Maidan are desperate to please their US masters and to ‘prove’ that the Nazi German swastika in the picture is fake. Just why a neo-Nazi military formation in the Ukraine would feel the need to CGI a Nazi German swastika onto one of its pictures – when its individual members are routinely photographed holding-up Nazi German flags and wearing Nazi German uniforms – has never been explained. It is an improbable scenario. Initially, the US apologists for Maidan neo-Nazism attempted to state that the entire photograph was fake, but it was subsequently proven to be an aggressive Azov unit attacking Eastern Ukraine and mimicking the Nazi German habit of ‘photographing’ the devastation.