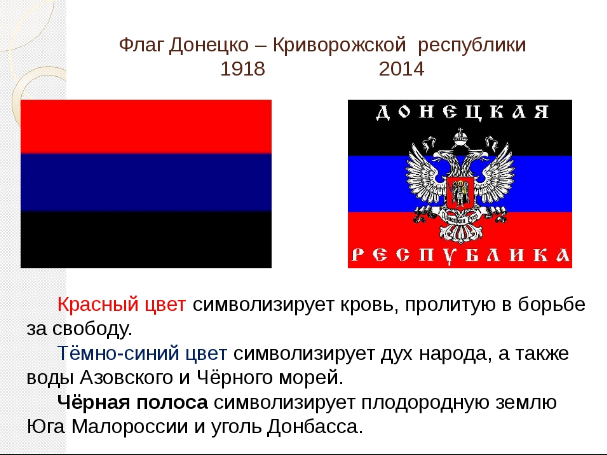 On February 12th, 2018, the 100th anniversary of the proclamation of the Donetsk-Krivoy Rog Republic (DKR) is celebrated, the Donetsk People’s Republic (DNR) being its successor – (#2018 YearHistoriesofDonbass).

Prior to this historic date (i.e. 2.12.1918), the Ukrainian People’s Republic (UNR) was approved in Kiev. In the UNR there was a blue and yellow flag – identical to the current Ukrainian flag, only inverted. The DKR flag consisted of the same colours as the DNR – that is red, blue and black, but was also inverted. History makes astounding somersaults (see above for flag designs).

The territory of the DKR coincided with those regions of Ukraine which are usually called Novorossia. Here is a reference from Wikipedia:

‘The borders of the republic were declared in the appeal of the Council of People’s Commissars of the DKCR on the 6.04.1918.

The territory of the republic includes the provinces of Kharkov and Ekaterinoslav (entirely), part of the Krivorozhye Kherson province, part of the districts of the Tavricheskaya gubernia (to the Crimean Isthmus) and adjacent industrial (coal) districts of the Don Cossack town of Shakhty and along the Rostov-Likhaya railway line (actually the whole Left Bank). Now these are the current Donetsk, Lugansk, Dnipropetrovsk and Zaporozhye regions, as well as partially of Kharkiv, Sumy, Kherson, Nikolaev and Russian Rostov. The capital of the republic was Kharkov, then Lugansk.’

The Soviet Kremlin made efforts to preserve (Russian) Donbass as part of Ukraine (through the Minsk Agreements). This is how the authorities in Soviet Moscow detached the DKK from Russia and placed it in the Ukraine. The leadership of the Republic was against uniting with the Ukraine. Appeals to join the RSFSR, were adopted at numerous meetings of workers of the DKR. The official reason for placing the DKR in the Ukraine – Moscow wanted to dilute the rural population of Little Russia with the proletariat. It was thought that the proletarians would, through their Socialist influence, help shed nationalistic sentiments amongst the indigenous people of the Ukraine. Now, they hope for the same thing.

If the historical parallels continue, then in four years a new, union treaty will be signed.