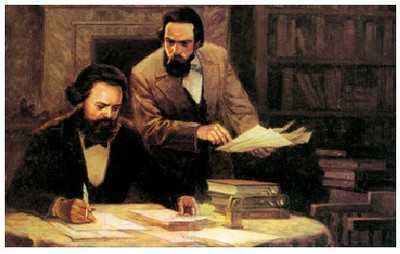 Translator’s Note: Anyone interested in ‘Organic Marxism can access ‘Organic Marxism: An Alternative to Capitalism and Ecological Catastrophe: Volume 3 (Toward Ecological Civilization) by Philip Clayton and Justin Heinzekehr’. There is a definite ‘Trotskyite’ tendency in this works, which attempts to create an admixture of generally disconnected modes of thought into one essentially incoherent bundle of ecologically led ideology. To achieve this it must permanently separate ‘Marx’ from ‘Lenin’ (and even ‘Marx’ from ‘Engels’), and present a type of distorted Marxism divorced from material reality and te genuine dialectical process. Importing what is essentially ‘bourgeoise’ modes of thought regarding protecting the environment is not required, as these ideas (and more) are already evident within Marx-Engels and Marxist-Leninism. It is te bourgeoisie and the capitalist system that it has created that is destroying the environment, and it is through the works of Marx that this process will come to an end – the bourgeois and new age ideologies of saving the environment are not required and are essentially incompatible with this task. Bourgeois modes of thought often protest environmental destruction whilst remaining silent about the capitalist system doing the destroying. Finally, Organic Marxism tends to use an ‘Orientalising’ viewpoint of China that has no bearing on the reality of China (going as far as including a distorted Daoist thinking into its structuring). Prof. Chen offers a succinct deconstruction of Organic Marxism through an article that originally appeared on ‘WeChat’. In China, Organic Marxism is generally viewed as a Western attempt to undermine China’s success whilst following the Marxist-Leninist path, and through the importation of a racist Trotskyite misrepresentation of China, bring down its Marxist-Leninist regime. Prof. Chen expertly points-out all the logical flaws in the underlying ideology of ‘Organic Marxism’. Under Marxist-Leninism, China is already leading the world in ecologically preservation and sustainability. (ACW 263.2018)

The subject of Organic Marxism has caused much academic interest and debate. As theorists, however, we do not subscribe to the idea that this subject is a ‘conspiracy theory’ and arbitrarily reject it our of hand, but rather approach its deconstruction from a purely academic position that objectively examines its theoretical and philosophical content. This process has led to a number of interesting questions that test the hypothesis of this theory.

Organic Marxism has only been an area of academic interest in China for about two or three years, and stems from a single book entitled ‘Organic Marxism: An Alternative to Ecological Disaster and Capitalism’ (published in the West in 2014, and in China in 2015). Since its publication in the Chinese language, a number of academic papers have been published examining the assertions and implications of this eclectic ideology. Of course, as theorists, we cannot talk for the original author(s), or examine his motivations or personal convictions (as we do not possess this information), but we examine the text that conveys this theory and present our findings for examination and debate.

2) Constructive post-modernism and Organic Marxism are considered unrelated topics within the context of Chinese academia. Can we naturally accept the practice of equating the two trends of thought? More to the point, can Organic Marxism in any coherent way be realistically associated with Chinese Marxism?

3) In the name of reconstructing Marxism, Marxism is understood as a mechanistic and deterministic modernistic way of thinking. Does this reconstruction originally mean misreading Marxism and depreciating Marxism?

4) If organic or process philosophy is to emphasize an essential integrity, procedure, connectivity and endurance, then these are already well-known facets of Marxist theory.  This being the case, why would Marxism need to import an alien form of organic philosophy?

5) Can organic Marxism successfully integrate various theoretical resources to achieve a truly organic integrationist theory? Will the diverse nature of these different philosophies and modes of thought lead to in-fighting, disintegration and collapse of the over-all position trying to be attained? What is the point of privileging organic philosophy, when traditional Chinese culture and Marxism are already integrated? Is organic philosophy qualified to compete with the latter two to occupy one dimension?

8) Organic Marxism criticises partiality, and instead emphasises the harmonising and balancing of predatory capitalism and Socialism, the unity of individualism and collectivism, and the unification of private ownership and public ownership. Is this attempt at ‘unifying’ the private and the public nothing less than ‘eclecticism’?

9) Organic Marxism positions the root of the ecological dilemma as the greed of the US imperialists and the rich, but will this ‘greed’ be excused for those who are not wealthy (i.e. the ordinary and the poor), but who have nevertheless been conditioned by capitalist thinking? Why is the deficient logic of capitalism (which permeates the entirety of capitalist society) ignored?

10) Organic Marxism constantly emphasizes the hope of an ecological civilization in China. Is this a misreading or misunderstanding of Chinese culture? Although it is acknowledged that a type of flattery is in play here, can China really emerge from the reality of its current predicament as a leader of the world’s ecological civilization?

11) Organic Marxism calls for a community that transcends the national level. Will it fall into an ecological utopia? Is it possible to put forward only some ecological slogans and find it difficult to seek real political power?