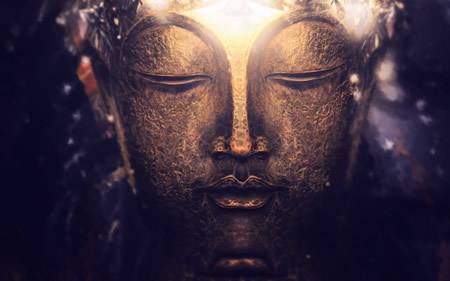 ‘I shall not die until the monks, the nuns, the laymen and the laywomen have become deeply learned, wise and well-trained, remembering the teachings, proficient in the lesser and greater doctrines and virtuous; until, having learned the teachings themselves, they are able to tell it to others, teach it, make it known, establish it, open it up, explain it and make it clear; until they are able to refute false doctrines taught by others and are able to spread the convincing and liberating truth abroad. I shall not die until the holy life has become successful, prosperous, undespised and popular; until it has become well proclaimed among both gods and men.’

According to the Buddha, he was not a divine being, and was not a founder of the philosophical path he taught. The Buddha claimed that his teaching was not new, but was ancient, and that he was one of a long line of enlightened human-beings that had directly perceived the truth he conveyed. This idea of a pre-existing ‘Buddhism’ runs in parallel with the Buddha’s description of the different meditative paths that he followed, fully mastered, and then abandoned because they were ‘incomplete’ and lacked a full interpretation of reality. Which explanation is correct? How could the Buddha follow at least six different meditative paths, and then state that his enlightenment was in fact a product of a pre-existing philosophical lineage in ancient India? If this was the case, then why not just follow the ancient form of Buddhism and ‘ignore’ the alternative (and ‘incomplete’) meditative paths? Perhaps the Buddha’s method involved the seeking-out (and trying) of other lineages, as an important part of his own ‘ancient path’.

Whatever the case, what must be looked for within ancient Indian spiritual texts is the idea of a materially derived philosophy that ‘rejected’ the idea of a permanent ‘soul’ (atma), as well as the institution of organised religion, and yet which still upheld the claim that a psychological and physical freedom could be attained through following a rigorous path of meditative training (and behavioural modification). In other words, did the Buddha’s path start with him, or is there evidence that its basic premises might have already existed within ancient Indian thought? It is well-known that ancient India had a hard materialist school (the ‘lokayata’), with which the Buddha knew in its ‘Ucchedavada’ manifestation. The Buddha agreed that the physical world appeared to exist, but disagreed that it was permanent or unchangeable. To the Buddha, each atom -or ‘tiny’ speck of matter – literally ‘flashed’ in and out existence. The Buddha also agreed that there was no ‘atma’, and therefore, no recourse to theistic religion as a path of legitimate salvation. He disagreed with regard to the Ucchedavada thinking which suggested that no moral or ethical system was required to achieve salvation, or that death was an end in and of itself. The Uchedavada believed that at death, each individual achieved the final nirvana – an interpretation the Buddha rejected. For the Buddha, salvation lay only in following a strict path of meditational development and behavioural modification, with enlightenment leading to the state of no operating karma, or valid notion of rebirth.

The presence of a hard materialist school prior to the rise of Buddhism does not, in and of itself, add weight to the argument that a type of Buddhism pre-existed the historical Buddha. Evidence for a type of Buddhism ‘pre-existing’ the birth of the historical Buddha, however, might exist in the Brahmanic teachings of the Upanishads. In the Kathakopanisad, a doctrine is critically described that does not accept the concept of a central and eternal ‘atma’, but which instead advocates a theory of ‘separate elements’ (prthag-dharman pasyati). The presence of this apparently ‘Buddhistic’ teaching in a pre-Buddhist text, suggests that there is some historical substance to the Buddha’s claim that what he teaches was not invented by him, and that as a distinct method and special body of knowledge, it pre-existed his birth into the world. The Kathakopanisad does not accept this apparently ‘Buddhistic’ teaching as valid, and rejects it by stating ‘Just as rain-water that has fallen down in a desert is scattered and lost among the undulations of the ground, jus so is (a philosopher) who maintains the existence of separate elements lost in running after nothing else but these (separate elements).’ Moreover, a various scholars have pointed-out that a number of ‘unorthodox’ teachings regarding the ‘soul theory’ appear scattered throughout Upanishadic literature. The Kathakopanisad rejects the idea of subtle and separate elements (prthag-dharma) as being untenable for the achieving of spiritual salvation, but its inclusion in this text demonstrates at least that the Buddha’s ideas were not ‘new’. It could be that after exploring the many different and yet obvious paths of meditational development, and despite the Buddha’s assertion that he found his path entirely through his own efforts, he actually had encountered a teacher who had imparted this final methodology to him. As to why this is not included in the Pali Canon is curious and open to interpretation.