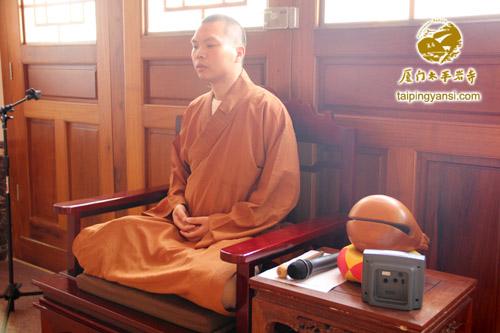 ‘It should be clearly understood that consciousness does not recognise an object. It is a sort of awareness – awareness of the presence of an object. When the eye comes in contact with a colour, for instance blue, visual consciousness arises which simply is awareness of the presence of a colour; but it does not recognise that it is blue. There is no recognition at this stage. It is perception (the third Aggregate discussed above) that recognises that it is blue. The term “visual consciousness” is a philosophical expression denoting the same idea as is conveyed by the ordinary word “seeing”. Seeing does not mean recognising. So are the other forms of consciousness.

It must be repeated here that according to Buddhist philosophy there is no permanent, unchanging spirit which can be considered “self”, or “Soul”, or “Ego”, as opposed to matter, and that consciousness (Pali: ‘vinnana’) should not be taken as “spirit” in opposition to matter. This has to be particularly emphasised, because a wrong notion that consciousness is a sort of Self or Soul that continues as a permanent substance through life, has persisted from the earliest time to the present day.’

When the Buddha’s disciple Sati asked the Buddha whether it was the ‘consciousness’ that transmigrated around – from one rebirth to the next (like a permanent ‘soul’) –  the Buddha called him ‘stupid’, and stated that he had never agreed with, or taught this doctrine. Instead, the Buddha reiterated that different types consciousness arises out of specific material conditions, and that without the presence of these specific material conditions, the different types of consciousness do not arise. The concept of Buddhist consciousness does not constitute a theistic ‘atma’, or ‘soul’ that stands in opposition to the material world, but is in fact a product of conditions arising out of the material world. Consciousness is included in the Four Noble Truths as being the fifth of five aggregates:

In Sanskrit the term ‘consciousness’ is written as ‘vijnana’, whilst in Pali it is rendered ‘Vinnana’. This Buddhist term in translated into the Chinese language as ‘識’ (shi2), and within this context refers to ‘recognising’, ‘discerning’, or to ‘viewing’ an object. This ideogram is probably better understood through its simplified version ‘识’ which is comprised of the left-hand particle ‘讠’ (yan2) – a contracted version of ‘言’ – that refers to ‘speaking’, ‘words’ or ‘expressing’ with the mouth. The right-hand particle ‘只’ (zhi3) is a picture of a mouth breathing in air and preparing to speak. When taken in its entirety, the Chinese ideogram ‘識’ (shi2) refers not to the act of speaking itself – but rather to underlying ‘preparation’ required for the act of speaking. This is the Chinese language term used within Chinese Buddhism to explain the foundation of conscious awareness. Within the context of Buddhist philosophy, this denotes the awareness of the presence of an object through the six senses of Buddhism, (i.e. eye, ear, nose, mouth, body and mind), recognising what sense organ is being used, but not yet understanding the full nature of the external object being sensed.

Within the Yogacara School, the fifth aggregate of consciousness is further subdivided in two specific ways which require an explanation. Firstly, it is an error of interpretation to suggest that the Yogacara School is ‘idealistic’ (as is common in the West), or that it should be translated as ‘Mind Only’. The term ‘Yogacara’ actually refers to ‘yoga practice’ and nothing more – in the Buddhist context this means engaging in the sustained act of correct (and) seated meditation. Another name for this school is ‘Vijnanavada’ or ‘Consciousness School’. It is is also known as the ‘Citta Matra’, and this is often mistranslated as ‘Mind Only’, but it could be better rendered as ‘Thought Only’, ‘Idea Only’, or even ‘Conception Only’. The ‘Mind Only’ misconception creates the false impression that the Yogacara School is stating that ‘mind’ is ‘real’ (and ‘permanent’) but that the physical world is ‘unreal’ (and ‘impermanent’). This is despite the founders of the Yogacara School acknowledging that they agree with the Buddha that ‘mind’ is impermanent. Obviously a mind that is ‘impermanent’ cannot be simultaneously ‘permanent’ (like an eternal soul), when the Buddha rejects any such notion. In reality, the founders of the Yogacara School (Asaṅga and Vasubandhu), specified that the body and mind must be properly trained (together), but that once the body has been pacified through discipline, it is the ‘mind’ that is the epicentre of Buddhist training. Furthermore, what is known about the external world is cognised in the mind via the six bodily senses. In this distinct sense, what is known about the external world (regardless of that world’s apparent insubstantiality), is ‘mind generated’. This should not be taken to mean that thoughts in the mind generate (or ‘create’) the external material world, or the myriad physical objects it contains. This suggests that the act of ‘perception’ (third aggregate), of the material world (first aggregate) through the bodily senses (second aggregate), that initiates the response of ‘thought formation’ (fourth aggregate) – with all four aggregates underlaid by the fifth aggregate of consciousness – does not ‘create’ or ‘generate’ the physical world it perceives, and that the act of perception is not an act of creation (as found in theistic religions where an ‘unseen’ god manufactures physical existence through an act of ‘will’). The Buddhist concept of consciousness is a response to the presence of the material world that interfaces with the bodily senses – and is not its progenitor.

This is what Asanga has to say about the fifth aggregate of consciousness:

(Zen & The Taming of the Bull – Towards the Definition of Buddhist Thought: Essays By Walpola Rahula, Gordon Fraser, (1978), Page 97. Quoted from the Sanskrit Buddhist text entitled ‘Abhidharmasamuccaya’)

Walpola Rahula states (correctly) that the terms ‘citta’, ‘manas’, ‘vijnana’ and alaya-vijnana can all be used interchangeably throughout both the Pali and Sanskrit Buddhist texts – with even the Mahayanic Lankavatara Sutra using these terms as if they are synonymous, whilst at the sametime also being used to refer to specific attributes of the mind and its functionality. Therefore, the Yogacara School adds the two extra terms ‘citta’ and ‘manas’ to the fifth aggregate of ‘vijnana’ (i.e. ‘consciousness’ proper). If ‘vijnana’ refers to the underlying ‘awareness’ of the presence of an object through a particular sense organ (as described above), then it logically follows that the other two terms ‘citta’ and ‘manas’ must have other meanings, for Asanga to have bothered with developing the process of redefining the fifth aggregate. This holds true even if ‘citta’ and ‘manas’ can also be used in the same context as ‘vijnana’. However, as ‘thought formations’ (i.e. ‘thinking’) is described in the fourth aggregate (sankhara), then both ‘citta’ and ‘manas’ – although included in the fifth aggregate – must also be related to the fourth aggregate.  Indeed, ‘manas’ appears to refer to the organ of the mind that functions through thought (perhaps by extension, even to the brain that generates the thinking ‘mind’), whilst ‘citta’ is indicative of the thought process as it occurs (as a stream of never-ending thoughts in the deluded mind). Asanga seems to be saying that the fourth aggregate of ‘thought formation’ has within it three distinct aspects of conscious awareness operating through it. This does not contradict the Buddha’s teaching, but rather adds to its clarity. It can be reasonably argued that what Asanga developed was simply that already implicit in the Buddha’s original teaching. Even the ‘store-consciousness’ (alaya-vijnana), is the product of the data received from the other four aggregates – plus the diverse (sensory) information processed through its own fifth aggregate of conscious ‘awareness’. All experience originates in the physical environment and is then processed through the human-mind. the ‘seeds’ or ‘innate memories’ are then ‘stored’ in the deepest recesses of the mind (and by extension the body), and are inwardly triggered in the mind and body of the individual concerned (as memories, assumptions, ideas, conceptions, modes of behaviour and emotions), when the external material conditions are conducive to their operation. This process of conditionality in no way suggests that the functioning human mind ‘creates’ the material world it senses and interprets (through the ‘seeds’ of previous experience). This means that Buddhist consciousness is an awareness of mind-body sensory data gathered from the external world, and is a psychological (i.e. inner) response to material conditions. Of course, once a baby grows into a child and then an adult, an entire raft of physical experiences and conditionality is imbued from the outside world and directed into the mind through the sense-organs. The mind then responds to his stimulus by generating an ‘internal’ world that ‘mirrors’ the conditioning history of the individual concerned, and the existential (material) environment that individual inhabits. When in the deluded or unenlightened state, this process of outer and inner conditionality is not understood, and ordinary humans tend to advocate various forms of hard materialism (i.e. only the external world exists), or hard ‘idealism’ (i.e. only the inner mind exists). The Buddha firmly rejects both these views, and suggests reality is ‘non-dual’ (i.e. an interaction of mind, body and environment), and that through meditative training (that breaks-up and dissolves all previous physical and psychological conditionality), this reality can be personally experienced. Consciousness (for the Buddha) is a temporary psychological construct that is designed (through the evolutionary process), to facilitate an inner basic ‘awareness’ connection between a sense-organ and its sense-object, This type of consciousness is impermanent and only lasts as long as the sense-organ is in contact with its sense-object. If this connection is broken, then the interceding consciousness ceases to function and to exist. During ordinary existence, whichever consciousness is prominent whilst sensing the material world all depends upon the focus of the mind and body of the individual concerned, with one sense-consciousness coming to the fore-ground before receding and another taking its place, as the mind directs its attention to different sensory-objects and environmental activities. Of course, should a sense-organ be impaired, all conscious activity can cease whilst the individual is still living, but all consciousness ceases at the point of physical death, as the sense-organs are permanently separated from their corresponding (material) sense-objects.